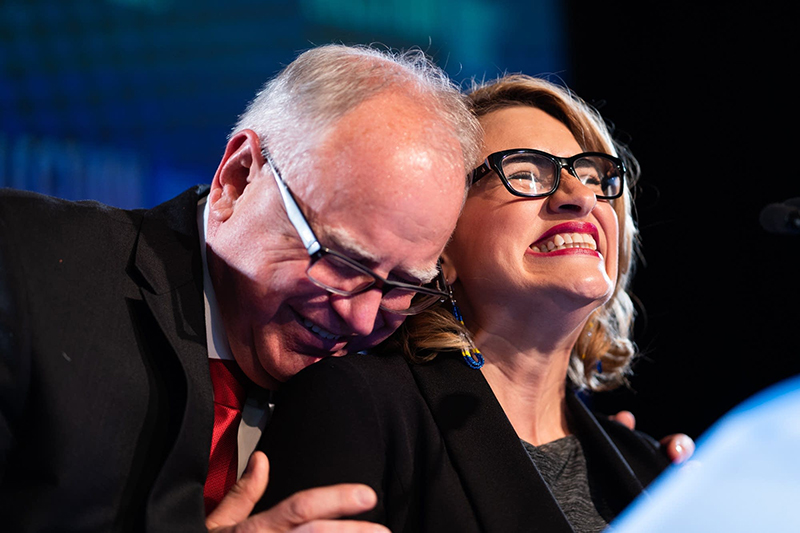 Peggy Flanagan was 25 years old and fresh off a victory for a Minneapolis school board seat when a geography teacher in jeans and a T-shirt strolled into her class at Camp Wellstone.

It was her job at the camp — named after the late U.S. Sen. Paul Wellstone — to train Democrats how to run for office. And the schoolteacher from Mankato was as green as they got. At 41, his only experience in politics was a stint volunteering for John Kerry’s presidential campaign.

“As a Democrat? Running against Gil Gutknecht?” Flanagan remembers saying. “And we’re like, good luck, but come on in!”

With Flanagan’s help that candidate, Tim Walz, went on to beat Gutknecht in 2006. They became friends, and more than a decade later, Walz sought her help again: running alongside him in his race for governor.

Now a year into their administration, they’re establishing their own model for governor and lieutenant, with Flanagan staking out a prominent role. She moved into an office down the hall from Walz. She has a big say in policies and positions as his top adviser behind the scenes. In public, she flanks him at nearly all public appearances, often speaking before the governor.

That’s in part because of how they met — Flanagan as the experienced politico, showing Walz the way.

“It seemed to me at that time that a schoolteacher with no experience should not be in Congress. It was a horrible way to look at it, but we were conditioned to think that. There were people who were groomed to do this,” Walz remembered. “It was with Peggy for the first time I realized that good candidates are the ones that didn’t plan their life to be in office but their life prepared them well.”

In Minnesota, the governor and lieutenant governor are a package deal on the ballot, so the pick is typically a political one. The lieutenant governor candidate can help make the ticket more balanced — in terms of race, gender, geography or ideology — and therefore palatable to a broader swath of voters.

Once they’re in office, however, lieutenant governors tend to fade to the background. That was the case with former DFL Lt. Gov. Yvonne Prettner-Solon, who left her Duluth seat in the state Senate to run alongside Minneapolis Democrat Mark Dayton in 2010. They won but were rarely seen together working on issues. By the time Dayton’s 2014 reelection came around, she wasn’t on the ticket again.

But when Walz was preparing to launch his gubernatorial bid in 2017, Flanagan, then serving in the state Legislature, was the only name on his list. He pitched to her something different: running together as a team from day one. Most gubernatorial candidates wait until months before the election to decide who their lieutenant candidate is.

That approach has translated into their work in St. Paul, where Walz describes Flanagan as his top adviser.

“Every major decision she is there from the beginning and helps me see about them differently and think about them differently,” Walz said. “You have a 55-year-old rural white guy who was in the Army and coached football, and you have a 39-year-old indigenous woman who lived in St. Louis Park. That brings a wealth of [ways] to approach these issues.”

It was Flanagan who insisted that the administration push for the first increase in decades to the Minnesota Family Investment Program (MFIP), a cash assistance program for low-income families that she received as a kid. Despite disagreements between a divided House and Senate, an increase of $100 a month per family was included in the final budget deal.

“We have an unlikely friendship, but it’s pretty cool,” Flanagan said. “We both recognize that the other has different lived experiences. I think we both come back to that if there’s ever a tricky spot, let me tell you where I’m coming from. There have been times when he’s changed my mind or I’ve changed his.”

There were bumpy moments during their first year that challenged their way of doing things. Flanagan, a member of the White Earth Nation, was devastated when it was revealed last summer that the state had overpaid her tribe, as well as the Leech Lake Band of Ojibwe, roughly $29 million in federal funds over the course of more than a decade for substance abuse treatments. The state wanted the tribes to help pay that money back.

Before the payment issue, the Walz administration had been working to repair relationships with the state’s 11 tribes, issuing an executive order to work government-to-government with them.

“When that came up I was like, come on,” she said. “It felt like a real setback and challenge, and of course I took it personally.”

Walz said Flanagan recused herself from the issue, but he was able to take over in her absence and work out a plan with the tribes going forward. After knowing each other for 15 years and a long run on the campaign trail, one can easily step in where the other can’t.

“If he’s had to lead a difficult negotiation and then we’re dealing with the next issue she can step in to a meeting and help guide things,” said Chris Schmitter, Walz’s chief of staff. “It’s been fun to me to see how they complement each other and how that energy is really infectious to the rest of the staff.”

Both make clear that Walz is governor and makes the final call on issues, but he said he wouldn’t be in that position without meeting Flanagan at Camp Wellstone nearly 15 years ago, as a first-time candidate who knew nothing about politics.

“I thought I had to shape myself to being people who I thought were politicians, and I thought, I’ll never be able to give a speech like that. That’s not how I talk, that’s not how I think,” he said. “It was [Flanagan] who said, ‘You need to be your own self, and if that works as a candidate it works.’”