A funeral service for Wilma Dunbar will be at 3 p.m. Saturday at Mansfield Lutheran Church in rural Alden with the Rev. Don Rose officiating. Visitation will take place one hour prior to service at the church. Burial will be in Mansfield Lutheran Cemetery with Bruss-Heitner Funeral Homes of Wells assisting the family. See www.brussheitner.com to leave online condolences. 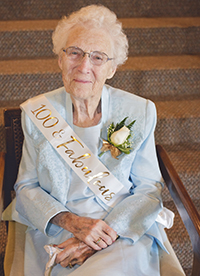 Wilma Dorothy Louise (Korn) Dunbar was born Sept. 3, 1918, in Alden Township to Reinhold and Dorothy (Wright) Korn. She was baptized Sept. 29, 1918, at Mansfield Lutheran Church. Wilma was confirmed in the Lutheran faith at Faith Lutheran Church of Walters. She went to District 130 school.

On Oct. 10, 1937, she was married to her one and only love of her life, Charles S. Dunbar Sr., at Faith Lutheran Church in Walters. To this marriage was one daughter, Audrey, and one son, Charles “Chuck” Jr., were born. She was a faithful member of Mansfield Lutheran Church and attending services up to six months ago. She was a member of Mansfield Women of the ELCA and the Rachel Circle.

Wilma was an outdoor person — first being her father’s right-hand man on the farm and then working alongside her husband as a farmer. She was proud being a farmer’s wife and having a large, clean garden and house. She enjoyed taking care of the livestock and chickens. Her and Charles moved into Kiester in 1976. She enjoyed playing cards, reading, traveling, gardening and flower gardening until she was 98. She loved giving away most of the vegetables she grew. She made the best strawberry jam and apple pies.

She became best friends with Lucile Anderson and every day they would walk the town of Kiester, playing cards and traveling to almost every state but one. Wilma loved her family and friends, especially her grandchildren as each generation came along.

She is preceded in death by her husband in 1981; her son, Charles “Chuck” Dunbar Jr., in 2013; both parents; her brother, Lavern (Ethel) Korn; sisters Marie (Melvin) Stern, Mildred (Max) Knudtson and Evelyn Peterson; all of Charles’ brother, sisters and their spouses; and many good friends, and especially Edina Swehla and Lucile Anderson.