Al Batt: Carpenter ants do not eat wood, but will nest in weakened material 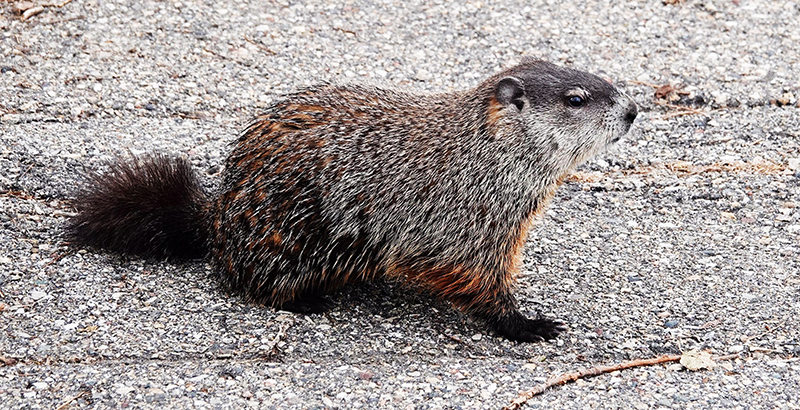 Blame the groundhog, woodchuck or whistle-pig for the weather. - Al Batt/Albert Lea Tribune

“Philip K. Dick said, ‘Reality is that which, when you stop believing in it, doesn’t go away.’” I add.

“Boy, you slobbered a bibful there. I had a tough day yesterday. I’d gotten the feeling that nobody loved me and the whole world hated me. Then I realized that couldn’t be true. There are many people who don’t even know me.”

White-tailed deer change from grazers to browsers in winter.

There were pheasants under the feeders in my yard. It’s a place where I can’t imagine them wanting to be. I saw a hen and a rooster walking through the snow together. It warmed me on a cold day.

Red foxes stay warm with their thick winter coats. An adult rarely retreats to a den in winter, but curls into a ball in the open, using its bushy tail to wrap around its nose and footpads instead.

The river was open, but wrinkled in the wind. I watched a hawk perched in a cottonwood. The hawk had quite a slice and it wasn’t anywhere near a golf course. In falconry, a slice is when a hawk propels its droppings out and away from a nest or perch. A bigger bird, like a bald eagle, can add serious velocity to that action. Falconers refer to hawk droppings as mutes. For some reason, I thought of a line from a book I’d read, “The hawk was everything I wanted to be: solitary, self-possessed, free from grief, and numb to the hurts of human life.” I’m guessing Helen Macdonald wasn’t thinking about slicing when she wrote that part of her delightful book, “H is for Hawk.”

I squinted to see the rabbit on the moon. The man on the moon is a myth. The moon looked yellow, silver or white, but was likely gray in color. 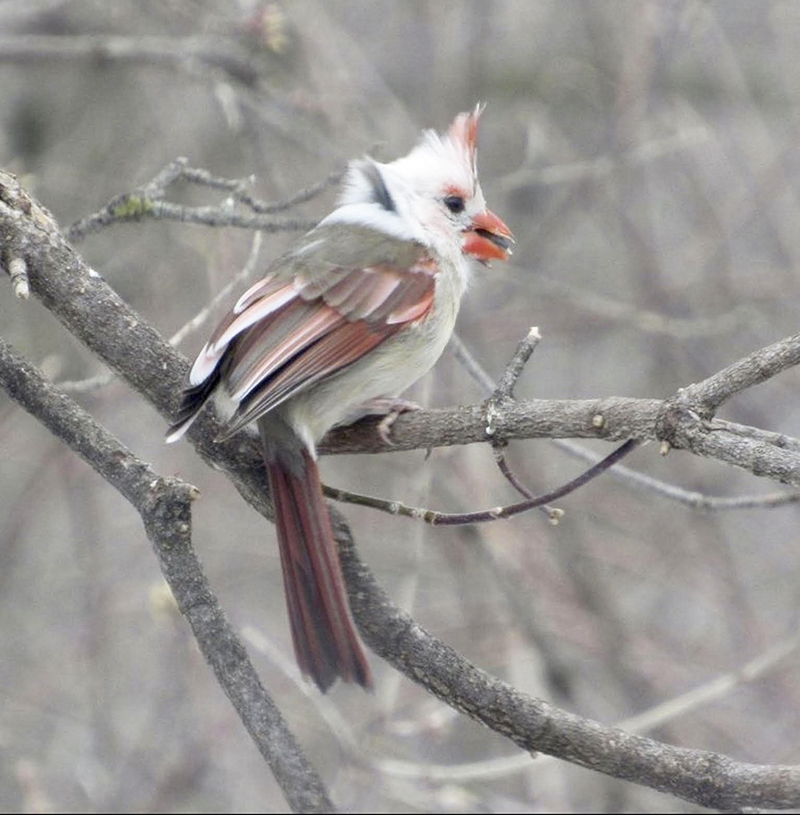 The abnormal feathers on this cardinal are the result of leucism, which prevents pigments from reaching some of the bird’s feathers. – Photo by Dean Young of Viroqua, Wisconsin

“What is the difference between a bird’s song and its call?” Songs and calls are the cellphones of the avian world. A bird’s song is generally related to mating. Birds may sing to attract mates, claim territory or for pair-bonding. Songs are often sung repeatedly. A call is more flexible in usage. Many calls are short notes or phrases that birds use to convey alarm, provide identification or maintain contact. The dapper black-capped chickadee’s “chick-a-dee-dee” call can be used to communicate danger, with research suggesting the number of dee notes increases in proportion to the perceived threat. A chickadee is as good a ventriloquist as Jeff Dunham, so it could be hard to place when it vocalizes without moving its lips.

“Squirrels aggravate me. I wish I could appreciate them more.” Your wish is granted and you still have two wishes remaining. Here are five reasons to treasure squirrels: they eat some insects, they plant trees, they are accomplished acrobats, they run down trees headfirst, and they speak highly of you.

“I like my window feeder, but how do I get the suction cups to stick?” Wash the window, wash the feeder, and place the suction cups in hot water for a few minutes to make the cups pliable. After you’ve dried the suction cups, apply a little vegetable oil on each cup and then wipe lightly before applying the feeder to a window that has been warmed by the sun or a hair dryer. Don’t fill the feeder until you’re sure it’s securely held in place.

“Do polar bears hibernate?” They definitely don’t in Minnesota. The farthest south that polar bears live all year is James Bay in Canada. In winter, polar bears move as far south as Newfoundland and the northern Bering Sea. Pregnant females dig a den in the snow, give birth, and emerge three months later. Females can go up to eight months without eating, but they don’t hibernate in the strictest sense. Adult males and non-pregnant females don’t hibernate or go into torpor.

Things to see or smell while walking uphill everywhere

1. Skunk cologne in the air.

3. On a sunny day, snow fleas might be seen on top of the snow where it had melted a bit around the base of trees or foundations of houses. They look as if someone had spilled pepper.

“The past, the present and the future are really one: they are today.” — Harriet Beecher Stowe

“Stare. It is the way to educate your eye, and more. Stare, pry, listen, eavesdrop. Die knowing something. You are not here long.” — Walker Evans

Shelley Pederson: Hang in there, spring is coming