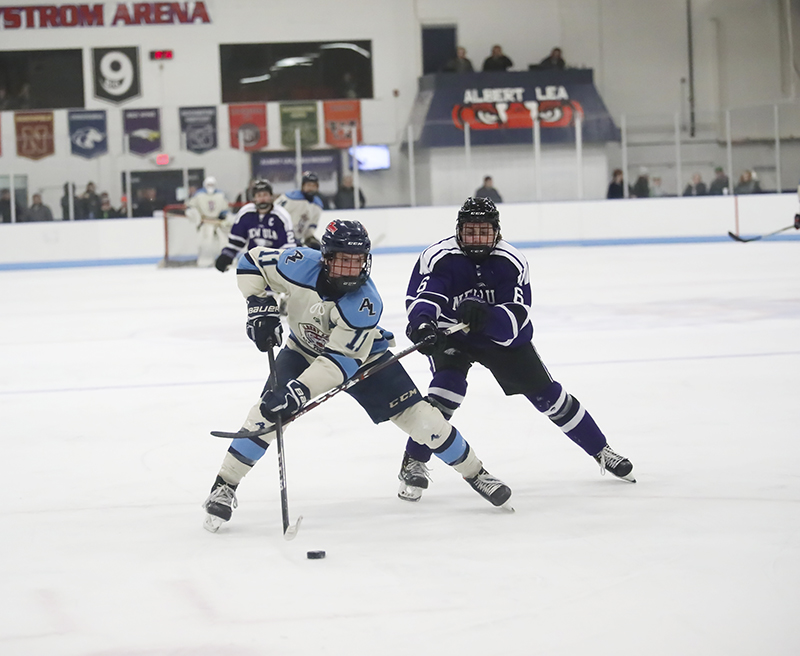 As the regular season draws to a close, the Albert Lea boys’ hockey team hosted New Ulm Thursday night in a non-conference showdown.

Despite scoring the first goal of the game, the Tigers were unable to hold back the Eagles, falling 3-1.

The first action of the game came from junior Blake Ulve, when he scored for the Tigers in the eighth minute of the game. Senior Culley Larson was in on the assist.

Junior Caden Severtson was called for a cross check penalty in the 13th minute of the first period, and it did not take long for the Eagles to capitalize on the opportunity. Just 23 seconds after Severtson was sent to the penalty box, the Eagles evened the game at 1-1, where it would stay into the first break. The Eagles outshot the Tigers in the first half, nine shots on goal to four.

Six minutes into the second period, the Eagles took the lead while the teams were at even strength.

Around two minutes later, New Ulm was called for a hooking penalty, giving Albert Lea a numbers advantage for two minutes. However, the Tigers were unable to capitalize, going scoreless through the power-play opportunity.

The second period ended with the Eagles up 2-1. The shots on goal were also in favor of the Eagles, 22-15.

The third period was quiet from both teams up until the last minute, when New Ulm all but sealed up the victory with its third goal of the game.

Down 3-1 with only 43 seconds remaining, the Tigers would be unable to pull out a comeback attempt.

The Tigers fall to 8-12-1 on the season and have just four games remaining before the Section 1A tournament. They will be back on the ice Tuesday with a game on the road against the Raiders of Northfield.

AL Central teams at the start of spring training