Memorial services for Clifford O. Otterson of Albert Lea will be at 11 a.m. Thursday at First Lutheran Church in Albert Lea. The Rev. John Holt will officiate. Interment will be in East Freeborn Cemetery at a later date. Visitation will be one hour before services at the church. Bonnerup Funeral Service is assisting the family. 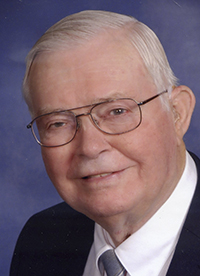 Clifford was born in Bath Township on Jan. 24, 1934, the son of Omar and Sophie (Jacobson) Otterson. He grew up and attended school in New Richland, and as a young man farmed on the family farm.

In 1952 Clifford moved to Albert Lea. He married his sweetheart, Margaret Sorenson, on May 22, 1955, and to this union three children were born, Diane, Denise and Brian. It was in these early years that he was proud to have built his own home, as well as two other homes and many other remodeling projects and additions for others. He was a skilled carpenter, to say the least, all the while working full time for Interstate Power Co. He served as operations manager of the gas department at Interstate before retiring in 1996 after 43 years.

Clifford was a devoted member of First Lutheran Church, serving on many committees and ushering for more than 40 years. Since 1972, he had been a proud member of the Sons of Norway and served in many capacities, including president.

Clifford had many interests and hobbies, including word find, playing cards and playing on his iPad. He liked to fish and hunt, including family hunts at his brother, Rolf’s, cabin near Pine City. He was an avid bowler, enjoying league play in his early years. Clifford and Margaret enjoyed their trips and adventures together, including spending 22 winters in Arizona with sister, Theresa, and her husband, Marlys, and also their three trips to Norway to visit family. Clifford enjoyed camping and always provided his family with a summer vacation. Norway Beach on Cass Lake was his favorite, and he also enjoyed the annual Jacobson reunion, where he was able to visit with many relatives from the northern part of Minnesota.

Clifford always said he wanted to live in the home he built until he died. His wish was granted, as Clifford passed away at home Friday, Feb. 14, 2020. He was 86.

He was preceded in death by his parents Omar and Sophie Otterson; brothers Eugene Otterson, Raymond Otterson and his wife, Bernice, Lloyd Otterson and Rolf Otterson; sister, Theresa Sorenson, and her husband, Marlys; and sister-in-law, Lana Otterson.

Clifford was a gentle soul and a great husband and father to his family. God rest his soul!