Funeral services for Harold R. Ballhagen will be at 2 p.m. Wednesday at Bonnerup Funeral Service, Albert Lea in with Chaplain Don Malinsky officiating. Visitation will take place one hour prior to the service. Burial will be in Lakewood Cemetery. 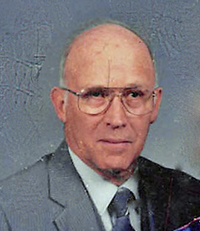 Harold R. Ballhagen was born July 26, 1932, in Rudd, Iowa, to parents Raymond and Mary (Jacobs) Ballhagen. He grew up in Rudd and graduated from Rudd High School. Harold was drafted into the United States Army and served his country honorably from 1952 until his discharge in 1954.

On June 20, 1954, Harold was united in marriage to Jacqueline E. Draeger in Nora Springs, Iowa. The couple was blessed with three daughters.

Harold worked at Albert Lea Foundry for 30 years until it closed. He then went to work at Northbridge Mall in the maintenance department, and lastly worked at Shopko in Albert Lea.

He is preceded in death by his wife, Jacqueline Ballhagen; both parents, Raymond (Mary) Jacobs; son in-law, Daniel Thompson; and brothers-in-law Lyle Cook and Boyd Burnette.