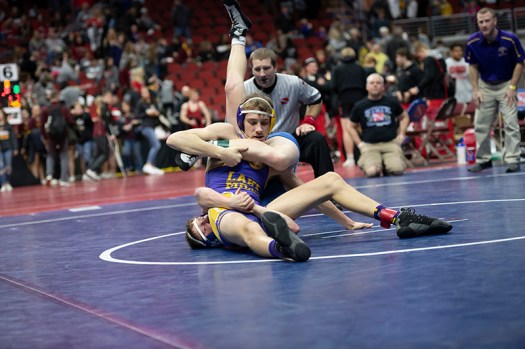 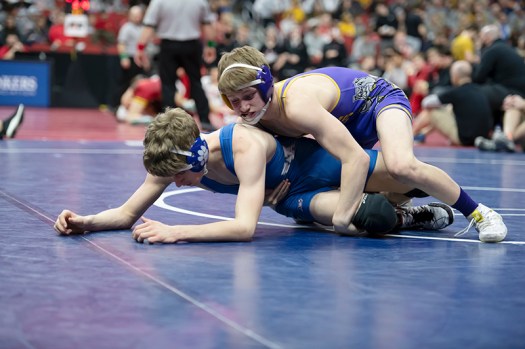 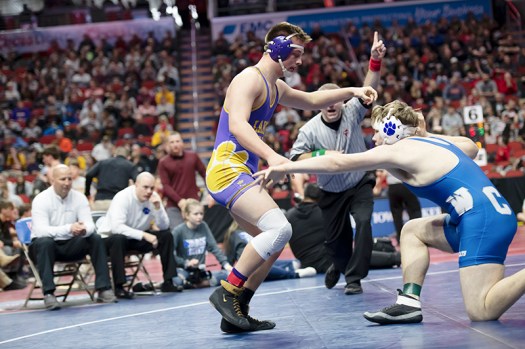 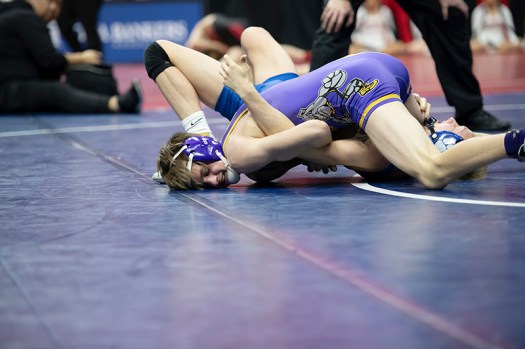 Junior Jack Ramaker fights for a pinfall Wednesday at the Iowa state dual wrestling tournament. Ramaker got the fall in the second period at 3:29. - Lory Gore/For the Albert Lea Tribune 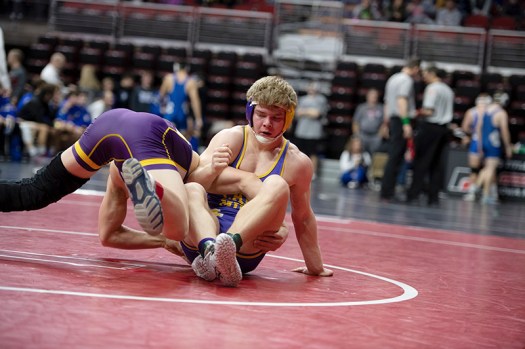 Casey Hanson attempts to fight out of the grasp of his Logan Magnolia opponent in the first round of the Iowa state dual wrestling tournament. Hanson lost the match 5-0 and the Bulldogs went on the lose the dual 40-33. - Lory Groe/For the Albert Lea Tribune 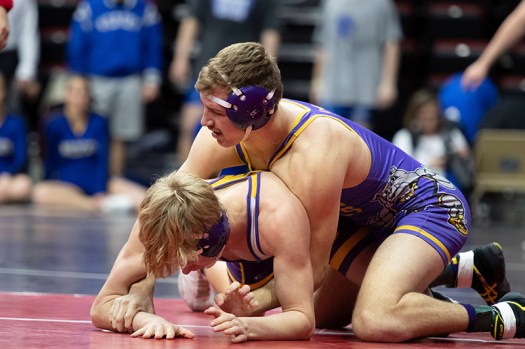 Marking their fifth-consecutive trip to the team tournament, the Bulldogs came away with a fifth-place finish, going 2-1 on the day.

Starting at 145 pounds, the Bulldogs got a win from Brett Peterson via a second-period fall. The Panthers cut the lead in their match at 152 pounds when Casey Hanson fell in a 5-0 decision.

Lake Mills then went on a four-match win streak to take a commanding lead. Ashten Love, Elijah Wagner and Drake Harnish won by a pinfall in the first period, followed by a 8-1 decision win by Brayden Lindeman.

Not to be outdone, the Panthers answered back with a six-match win streak. Bulldogs Riley Kirschbaum, Chris Jamptgaard, Kinser Hanson, Jimmy Gallardo and Lucas Humphrey all fell victim to a pinfall and Jack Ramaker lost in a 9-3 decision.

Down 36-27 with just two matches remaining, Lake Mills got a much-needed win from Alex Beaty at 132 pounds. Beaty won in a second-period pinfall and cut the lead to just three points.

The Bulldogs lost the dual after Dalton Thorson lost his the final match in a 12-3 major decision.

The loss relegated Lake Mills to the consolation bracket, where it met up with No. 8 seed Woodbury Central.

The Bulldogs had better luck hanging on to an early lead against the Wildcats, pulling away to win the dual 42-29.

Casey Hanson got things started with a narrow 10-9 decision win at 152 pounds. He was followed by wins from Wagner, Love, Brady Hanson and Drake Harnish, all picking up falls in the first period.

Up 27-0, the Bulldogs gave up four matches in a row, dropping their lead to seven points. Lindeman and Jamptgaard lost via pinfall and Hanson and Humphrey both lost in major decisions.

Ramaker got Lake Mills back on the winning track with a pinfall win at 120 pounds before Gallardo fell to a pinfall in his match at 126 pounds.

With three matches remaining, the Bulldogs were leading 33-26. Beaty extended the lead to 10 with a 8-6 decision win and Thorson secured the victory with a pinfall in the first period. Peterson lost his match at 145 pounds in a 7-1 decision.

Lake Mills moved into the fifth-place dual, where they squared off against No. 6-seed Denver.

The Bulldogs once again got out to a big lead, only this time they stayed well out in front, beating the Cyclones 54-21.

Lake Mills jumped out to a 15-0 lead after wins from Love, Wagner and Harnish. Love and Harnish won by pinfall and Wagner won in a 5-3 decision.

Peyton Severson dropped his match at 195 for the Bulldogs in a first-period fall, but the Bulldogs rattled off three-consecutive falls in their next matches to take a 33-6 lead. Lindeman, Kirschbaum and Kinser Hanson picked up the pins.

The Cyclones traded wins with the Bulldogs through the next three matches as Geraldo Vasquez and Gallardo lost their matches in pinfalls. But Ramaker picked up an 11-7 decision win in between the two matches.

Already up 36-18 with just four matches remaining, the Bulldogs needed one more victory to shore up the win. Beaty won the dual-clinching match with a pinfall in the first period and was followed by Thorson picking up a forfeit win.

Peterson lost in a 9-5 decision at 145 pounds before Casey Hanson picked up a win in the last match of the dual via a third-period fall.

The Bulldogs end their team dual season with a fifth-place finish at state. Three individual Bulldogs, Casey Hanson, Wagner and Thorson, will continue their season in the individual tournament starting Thursday.