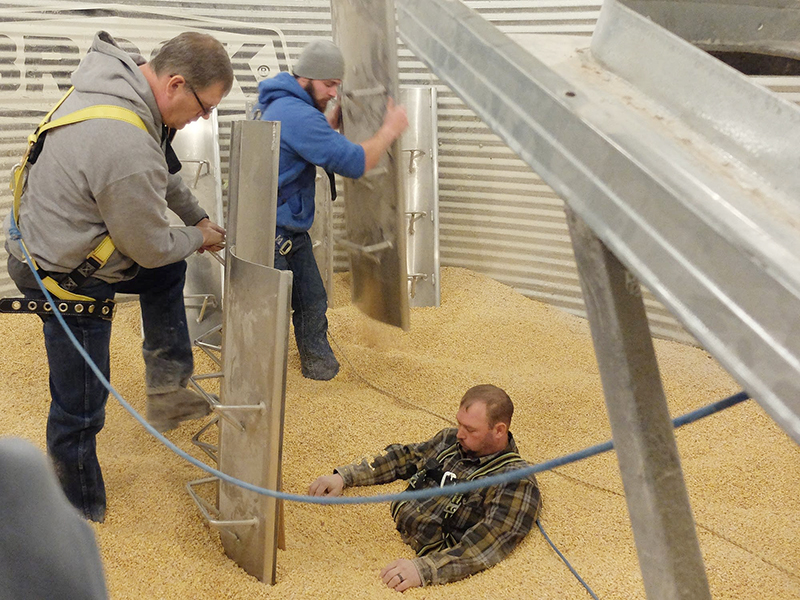 Volunteers Barry Green and Casey Puetz, who work for Minnkota Ag Products in Breckenridge, set up gear during a grain bin rescue class taught by Dale Ekdahl at a training facility on the Ekdahl farm near Erdahl on Saturday. - Dan Gunderson/MPR News

Dale and Cindy Ekdahl got into the grain bin safety business more than a decade ago.

It started, Dale recalls, after a 13-year-old boy died not far from their farm in western Minnesota. The boy had been buried in grain, a common type of accident: Shifting grain inside the bin smothers a person who’s pulled under.

Those tall silver grain bins are ubiquitous in farm country. They’re used to store the fall harvest — but can also be dangerous. Each year, dozens of grain bin accidents happen across the country. Many are fatal.

The Edkahls have developed a way to rescue people who fall in to grain bins — and they hope state officials will do something to ensure that farms across the state have equipment on hand that could help prevent accidents altogether.

After the 13-year-old’s death, a local fire department asked Dale Ekdahl, who had worked as a safety consultant, to build gear rescuers could use to help save someone trapped in the quicksand-like grain.

Other grain bin rescue gear existed on the market, but Ekdahl worked with the firefighters to make what they considered to be a better system. He built a set of curved metal shields about six feet tall that could be inserted into the grain, forming a circle around the trapped person. The smooth metal shields create a barrier that allows rescuers to dig the person out and prevent the grain from covering them.

It worked — and Ekdahl now sells the equipment. He and his family have trained first responders from 22 states on how to conduct grain bin rescues.

This winter, business is booming. The Ekdahls are hearing from fire departments concerned about all the wet corn brought in across the Midwest in the fall, when soggy fields and early snow forced a late harvest.

Grain that’s put in a bin while still wet is the most common cause of grain silo accidents, Ekdahl said. Wet corn can create clumps that make it difficult to load the grain from the bin into trucks when it’s hauled to market. When that happens, someone has to enter the bin and break up the chunks. Grain can shift, trapping the person, and sometimes suffocating them.

According to the state Department of Agriculture, at least eight people died in grain bin accidents last year in Minnesota.

Researchers at Purdue University have been tracking these accidents for decades. Minnesota is among the three states with the largest number of cases, along with Iowa and Indiana. Grain bin accidents — which the researchers believe are under-reported by at least 30 percent — can include falls, asphyxiation from toxic fumes and getting caught in machinery. In Minnesota, 114 of the 193 accidents the researchers have tracked since 1962 involved people getting caught in the grain itself.

The U.S. Department of Agriculture and Minnesota Gov. Tim Walz proclaimed this week “Grain Bin Safety Week” to draw attention to the issue.

On their farm near Erdahl, a half-hour south of Fergus Falls, Cindy and Dale Ekdahl built an indoor training facility to teach grain bin safety, and how to use the rescue equipment. They regularly hold classes for firefighters and people who work for commercial grain elevators.

Volunteers are buried waist-deep in a roofless grain bin. Rescuers practice removing them while others watch from walkways around the bin.

On a whiteboard in the office is a list of 22 cases over the past decade in which the Ekdahls say people were successfully rescued by first responders using their equipment.

But the Ekdahls are frustrated. They’d prefer to get to a point where safety practices are so standardized that there’s no need for grain bin rescues — and no need for their rescue equipment. And they’re hoping state lawmakers, which began the 2020 legislative session last week, will agree.

“We’re not doing enough, because they keep having accidents, people keep dying,” Dale Ekdahl said. “Nothing we’ve done ever slows down the death rate.”

Cindy Ekdahl said she loses sleep every time she hears about someone dying in a grain bin because they weren’t using protective safety gear.

“A lot of times, I cry,” she said, “because when it’s just cutting corners — so preventable — it just makes me sad.”

Many grain bin deaths happen on farms, and not at grain elevators. Large grain-handling companies are required to follow specific safety procedures. But Dale Ekdahl said individual farmers aren’t subject to those regulations, and often cut corners: entering a grain bin alone when conditions are dangerous; not wearing a safety harness; attached to a rope to keep them from getting buried in the grain.

So the Ekdahls are widening their focus to put more emphasis on preventing the situations that require a rescue. They want to get safety gear in the hands of farmers, because on the farm is where most grain bin accidents happen. They want state lawmakers to create incentives for farmers to buy safety equipment and for agri-businesses to underwrite some of the cost.

Dale Edkahl said he believes the solution is education — and encouraging farmers to be safer around grain bins. His company has assembled a farm safety kit, with supplies like a safety harness, a rope, a face mask and a walkie-talkie to call for help. They sell for about $300 each.

Ekdahl wants agribusiness and government to provide some incentive for farmers to buy — and use — safety gear, whether from his company or anywhere else.

The Edkahls acknowledge such a move could mean more business for them. But Dale Ekdahl said he doesn’t care where farmers get their safety equipment — his company isn’t the only one that sells it — as long as they have it and use it.

The couple is about ready to retire, he said — and, at this point, Cindy Edkahl, who owns the business, is tired of training rescuers after a tragedy. She wants to change the persistence of fatal grain bin accidents, year after year, across the country.

“With what we do, we always come in after the fact. It would just be nice to do something to prevent those things from happening,” she said.

Dale insists he doesn’t care where farmers get safety gear, but he wants them to think about the cost of cutting corners when it comes to grain bin safety.

“If it saves one life, just one, it would be worth having 10,000 of them out there,” Dale Ekdahl said, “if you could just save one life.”