Woman arrested after pursuit that ends in school parking lot

Authorities arrested an Albert Lea woman Monday morning after she led law enforcement officers on a pursuit from Lake Mills to Albert Lea. 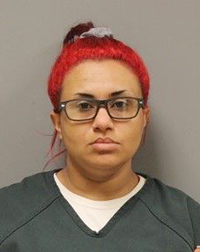 Kyria Roldan, 30, was arrested on charges of fleeing police and no possession of a Minnesota driver’s license, according to the Freeborn County Sheriff’s Office.

Freeborn County deputies were called to assist the Lake Mills Police Department at 7:49 a.m. Monday after the woman reportedly refused to pull over for a traffic stop in Lake Mills.

Roldan, who had two children in the vehicle, reportedly fled north on U.S. Highway 69, traveling at speeds as high as 70 mph. She reportedly avoided stop sticks, before stopping in the Southwest Middle School parking lot.

Albert Lea police said the school was notified of the incident, and there was no threat to staff or students.