A visitation for Robert “Bob” D. Sabin will be from 4 to 7 p.m. Thursday at Bonnerup Funeral Service in Albert Lea. Burial with military honors will take place at 1 p.m. Friday at Fort Snelling National Cemetery, 7601 34th Ave. S, Minneapolis, MN 55450, at Assembly Area No. 5. 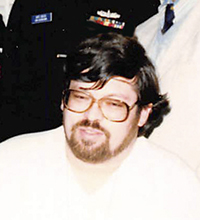 Robert David Sabin was born Sept. 14, 1953, in Albert Lea to Ralph and Gladys (Flattum) Sabin. He grew up and attended school in Lake Mills before moving to Albert Lea his senior year of high school.

After graduation from Albert Lea High School, Bob enlisted in the United States Navy. He traveled on ships all over the world during his time as a disbursing clerk in the Navy during the Vietnam era. In total, Bob served his country for 14 years before his medical retirement.

Following his service, he worked as a government service employee in Ohio and Virginia before returning to the Albert Lea area. When he returned to Albert Lea, he began taking classes in Mankato to become a computer programmer. He then worked as the veterans service administrator in Freeborn County, helping many veterans obtain their full benefits.

When he wasn’t working, he enjoyed fishing, playing cards and trips to the casino. He liked spending time with family and visiting with anyone who would stop by.

He is preceded in death by his mother, Gladys Sabin; sister, Beverly Nelson; and brother, James “Jimmy” Sabin.