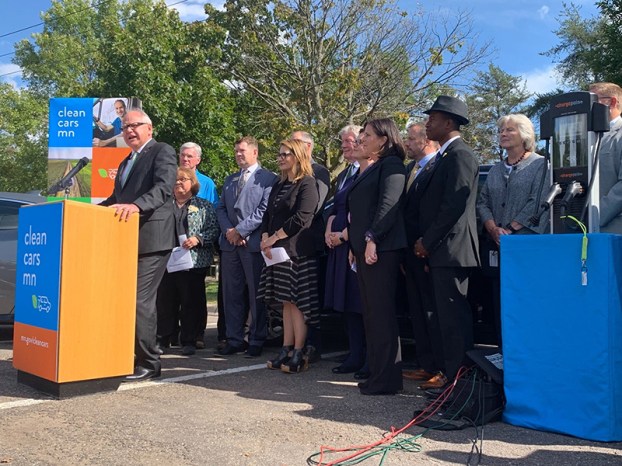 Gov. Tim Walz’s proposal to implement a “clean cars” rule in Minnesota came under fire at the state Legislature Wednesday.

The Walz plan would create a rule managed by the state Pollution Control Agency designed to make more low- and zero-emission vehicles available for sale in Minnesota.

Rural Republican state senators railed against the plan, which follows California’s lead, arguing it should have gone through the Legislature instead of an agency rule-making process. They questioned the impact the rule might have on human health, which it is intended to support, and climate change, the effects of which it is intended to help mitigate, and asserted it would raise the prices of cars and trucks sold in Minnesota.

“This is really circumventing the state of Minnesota, its citizens, and the Legislature,” Sen. Carrie Ruud, R-Breezy Point, told Minnesota Pollution Control Agency Commissioner Laura Bishop at a hearing Wednesday.

Walz unveiled the proposal last September, pledging to make Minnesota the first state in the Midwest to adopt California’s “clean car” standards. The plan would require auto manufacturers to offer more hybrid and electric vehicles for sale in the state. Thirteen other states have adopted the rules.

It marked the first time the proposed rule has gotten a hearing at the state Legislature.

Legislation passed in 2007 called for an 80 percent reduction in Minnesota’s greenhouse gas emissions by 2050. But the state is not on pace to meet that target, despite a significant drop in carbon emissions in the electric power sector as utilities have replaced coal-fired power plants with renewable energy.

Transportation now makes up the largest chunk of the state’s emissions. Bishop said this rule-making would help to de-carbonize that sector.

“Addressing climate change is one of the top priorities of the Walz administration, and that is just one of the reasons why we are proposing this rule-making,” she said.

Bishop also addressed what she said were several misconceptions around the proposed rule.

What it will do is require car dealers in the state to carry a certain percentage of zero- and low-emissions vehicles in their inventory.

“We don’t have access to fully half of the models that are out there that Minesotans want to have access to,” said Sen. Scott Dibble, DFL-Minneapolis.

Bishop said the details of the proposed rule will be released next month, but she expects that 6 to 8 percent of dealerships’ fleets will be made up of EVs and hybrids.

“To me, forcing this onto people is not a proper function of government,” said Republican state Sen. Bill Weber of Luverne.

Several Republican lawmakers brought up Walz’s campaign slogan of “One Minnesota,” saying this proposal didn’t represent the rural interests of the state.

Auto dealers say the proposed rule would increase the cost of all vehicles sold in the state by an estimated $800. The MPCA says it’s analyzing how much it could raise the price of vehicles and will include that information in the draft released next month.

My constituents “may be able to keep their F-150 [Ford pickup trucks], but at what cost?” said Eichorn.

Many legislators said they would be more supportive of a tax incentive to encourage consumers to purchase electric vehicles than a government mandate requiring auto manufacturers and dealers to provide them.

The MPCA held a series of six public meetings around the state last year to gather feedback on the proposal, including several meetings in rural Minnesota. The agency received more than 2,400 responses.

The most common comment the agency received, according to the MPCA, was support for reducing greenhouse gas emissions, and a sense of urgency to act on climate change. Other respondents expressed support for improving air quality and increasing the number of electric vehicles available to consumers. A smaller percentage addressed potential cost concerns.

Bishop said the agency is in the process of drafting the rule, which it plans to release next month. That will be followed by public hearings in the spring. She hopes the final rule will be published in December.

But Bishop added that, according to guidelines in the Clean Air Act, the rule could not be implemented until 2023, and would first impact vehicles manufactured in 2024.

“So it is a ways out,” Bishop said. “I think this can frighten people that it’s too much, too soon.”