Should it be legalized? 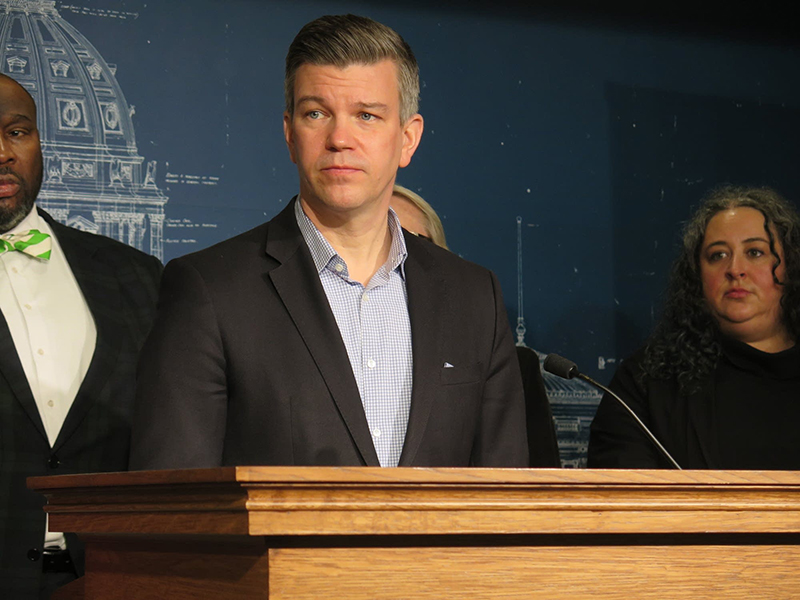 House Majority Leader Ryan Winkler, DFL-Golden Valley, listened to a reporter’s question during a news conference Tuesday in St. Paul, in which he outlined the guiding principles for a bill expected this year to legalize cannabis. - Tim Pugmire/MPR News

House leaders not committing to floor vote on legal cannabis

Democrats in the Minnesota House say they are preparing a marijuana legalization bill for the upcoming legislative session, but they’re no longer promising a floor vote.

The legislation will be based on input gathered during a series of 15 public meetings over the past few months, said House Majority Leader Ryan Winkler, DFL-Golden Valley.

Winkler and other lawmakers outlined a set of guiding principles Tuesday that will be incorporated in the bill to legalize, tax and regulate cannabis for adult recreational use. The principles cover the business, public safety and health aspects of legalization.

“It will be a bill that will represent the best step forward for Minnesota and should be the best legalization bill in the country to date,” Winkler said.

DFL Gov. Tim Walz supports legalization, and Winkler said the administration is involved in writing the bill. But the Republican Senate remains firmly opposed to legalization. Senate Majority Leader Paul Gazelka, R-Nisswa, has said he has no plans to take up the issue this year.

Despite the opposition, Winkler previously said the House would still pass a legalization bill this year. But now, Winkler said he’s not sure what will happen to the bill after some committee hearings.

“Making a statement by passing it off the House floor doesn’t necessarily serve the interest of getting a quality bill passed when it’s time comes. It may or it may not, but we just don’t have that knowledge yet this session,” he said.

“Rather than focus on something with so many question marks, Democrats should work across the aisle and focus on securing our shared priorities, such as reducing the cost of health care, cracking down on government fraud and failure, and improving our education and infrastructure,” Sen. Bill Ingebrigtsen, R-Alexandria, said in a written statement.

Winkler said a separate push will be made this year, with Republican support, to expand the state’s existing medical cannabis program. He said changes are needed to the program to make it more accessible and affordable.

“There are too many Minnesotans who are being hurt and harmed by our current medical cannabis program,” he said.