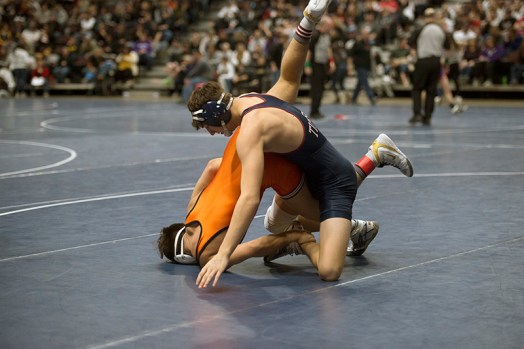 Junior Caleb Talamantes tries to get behind his opponent for two points Saturday in Rochester. Talamantes came in third place at 152 pounds. - Tyler Julson/Albert Lea Tribune 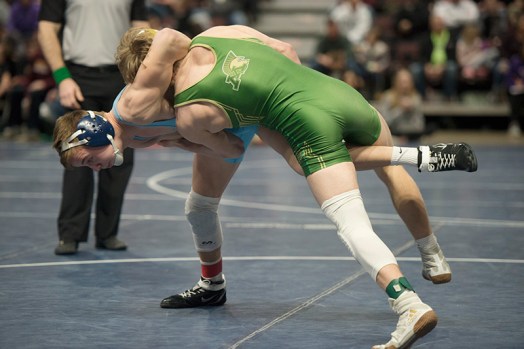 Freshman Cole Glazier gets caught in a takedown attempt by his Rochester Mayo opponent in Saturday's semifinal round. Glazier lost the match, but came back to take third place at 145 pounds. - Tyler Julson/Albert Lea Tribune 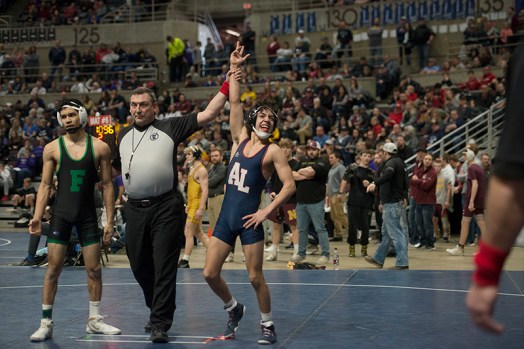 Junior Tucker Eriksmoen celebrates after a big win to advance to the finals at 126 pounds. - Tyler Julson/Albert Lea Tribune 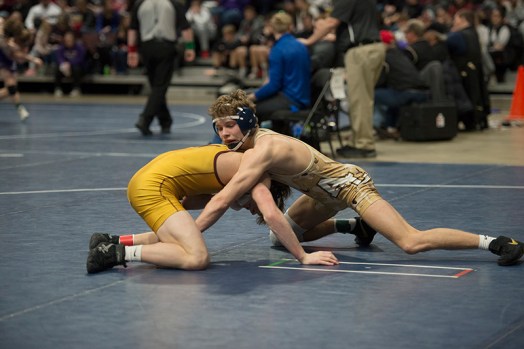 Sophomore Cameron Davis attempts to gain control of one of his opponent's legs Saturday at the Section 1AAA tournament. Davis went on to win the consolation bracket, but missed out on a wrestleback. - Tyler Julson/Albert Lea Tribune 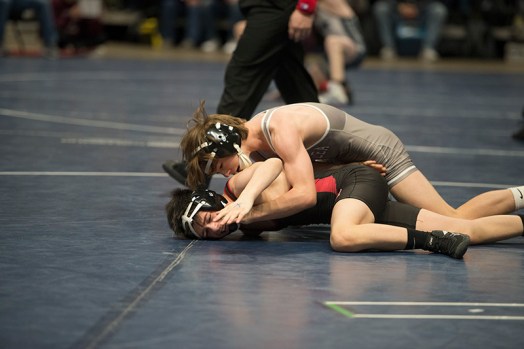 Albert Lea freshman Aivin Wasmoen rides out his first-round opponent in the Section 1AAA tournament in Rochester. Wasmoen went on to get second in his 106-pound weight class and was the only Tiger to qualify for the state tournament. - Tyler Julson/Albert Lea Tribune

With a trip to the state tournament on the line, the field was dwindled to just two wrestlers in each weight class, with only one Tiger punching his ticket.

Freshman Avin Wasmoen got the day off to a winning start at 106 pounds, beating Farmington sophomore Ryan Sullivan in a 12-1 major decision. The win earned Wasmoen a spot in the championship match, where he took on No. 9-ranked Owatonna freshman Cael Robb.

Wasmoen fell in a 3-0 decision in the championship match. However, after already beating the third-place finisher, Wasmoen earns a trip to the state tournament.

Junior Tucker Eriksmoen was the second Tiger to reach the championship final after another momentous win at 126 pounds, this time over Faribault junior Gael Ramirez in an overtime thriller, 8-7. In the finals, Eriksmoen went up against No. 8-ranked Chase Murphy.

Eriksmoen was pinned in the championship match and was forced into a wrestleback for his chance at state.

In his wrestleback, Eriksmoen squared off with Winona freshman Logan Henningson and lost a 3-1 decision. Eriksmoen ends his season with a third-place finish and a record of 11-19.

At 132 pounds, No. 5-ranked sophomore Cameron Davis ran into a tough opponent in Northfield junior Sam Holman and fell in a 7-2 decision. Moving into the consolation bracket, Davis took on Austin sophomore Lathan WIlson and earned the easy win with a pin in the first period.

In the consolation finals Davis dominated Owatonna junior Chase Dallman in a 13-1 major decision. However, he was not awarded a wrestleback and his season came to a close.

Davis finished third in the section with a record of 38-8.

No. 3-ranked freshman Cole Glazier lost his semifinal match at 145 pounds. The loss came at the hands of No. 5-ranked Rochester Mayo senior Cade Sheehan in an 8-4 decision. Glazier moved into the consolation bracket where he met Northfield junior Gavin Anderson and won in a 9-2 decision.

Glazier advanced into the consolation finals where he took on Owatonna senior Jerez Autridge. Glazier won in a dominant 8-1 decision, but did not receive a wrestleback. Glazier ends his season with a third-place section finish and a 39-6 record.

The final Tiger to wrestle in the semifinals was No. 4-ranked junior Caleb Talamantes at 152 pounds. Talamantes dominated No. 9-ranked Farmington eighth grader Cole Han-Lindmyer in a 13-6 decision. In the championship final, Talamantes took on No. 1 Owatonna sophomore Landon Johnson and after jumping to a quick 5-0 lead, fell in a 9-6 decision.

Talamantes was forced into a wrestleback to earn his trip to state and took on Rochester Century senior Garrett Pavelko. Talamantes lost the match in a 7-2 decision, ending his season with a third-place section finish and a 38-9 record.

Barney took on Farmington sophomore Chase Vought at 170 pounds and fell victim to a first-period fall, placing him in the fifth-place match. In his final match of the season, Barney lost due to an injury in the first period. Barney finishes his junior year with a sixth-place finish in the section and a record of 6-17.

Indrelie wrestled Northfield senior Jack Holman and lost in an 8-1 decision, sending him into the fifth place match. In Indrelie’s final match of the season, he beat Rochester John Marshall junior Ronoldo De Jesus via a second-period fall. Indrelie ends his season with a fifth-place finish and an 8-16 record.