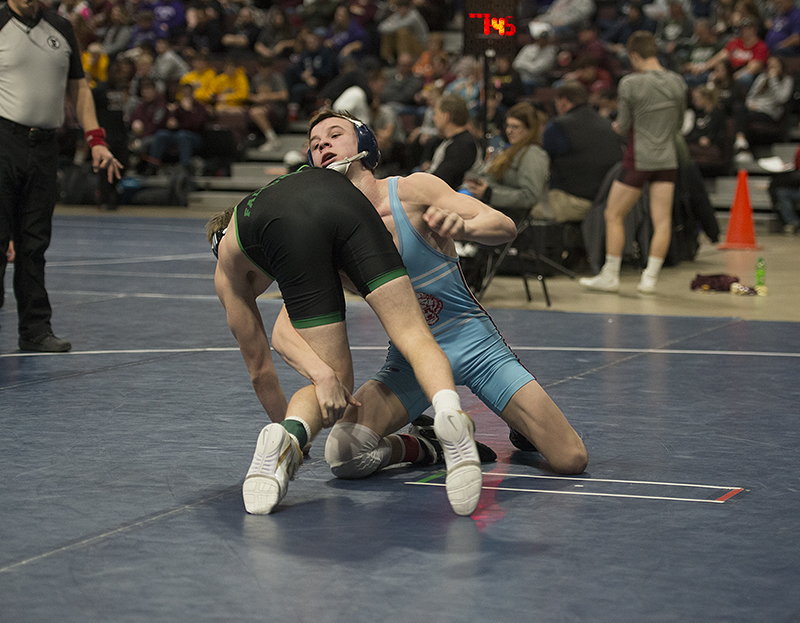 Albert Lea freshman Cole Glazier grabs the knee of his Faribault opponent in the quarterfinals of the Section 1AAA tournament Friday in Rochester. Glazier won the match via a second-period fall. - Tyler Julson/Albert Lea Tribune

ROCHESTER — Ten Albert Lea wrestlers made their way to Mayo Civic Center in Rochester for day one of the Section 1AAA individual tournament.

At the end of the day, five Tigers were still on the championship side of the bracket and two more still in contention on the consolation side for a trip to the state meet.

Freshman Aivin Wasmoen was the first Albert Lea wrestler to earn his way into Saturday’s semifinals with a third-period fall over Rochester John Marshall freshman Brody Robinson at 106 pounds. Wasmoen will take on Farmington sophomore Ryan Sullivan in the semifinals Saturday morning.

At 126 pounds, sophomore Tucker Eriksmoen pulled out a big upset, defeating No. 9-ranked Kanin Hable, a sophomore from Owatonna. The 7-6 decision win launched Eriksmoen into Saturday’s semifinal, where he will meet Faribault junior Gael Ramierez.

No. 6-ranked Cameron Davis made quick work over Winona eighth grader Brenin Speltz, getting the pinfall in 11 seconds at 132 pounds. Davis moved into the semifinals, where he will take on Northfield junior Sam Holman.

From there, the Tigers jumped to 145 pounds, where No. 3 Cole Glazier earned a pinfall over Faribault senior Alex Hoy. Glazier moves into Saturday’s semifinals, where he will face No. 5-ranked Rochester Mayo senior Cade Sheehan.

The final Tiger to move into the championship semifinals was junior Caleb Talamantes at 152 pounds. The No. 4-ranked Talamantes won by decision over Faribault senior Bryce Nolan. Talamantes will take on No. 9-ranked Farmington eighth grader Cole Han-Lindemyer. 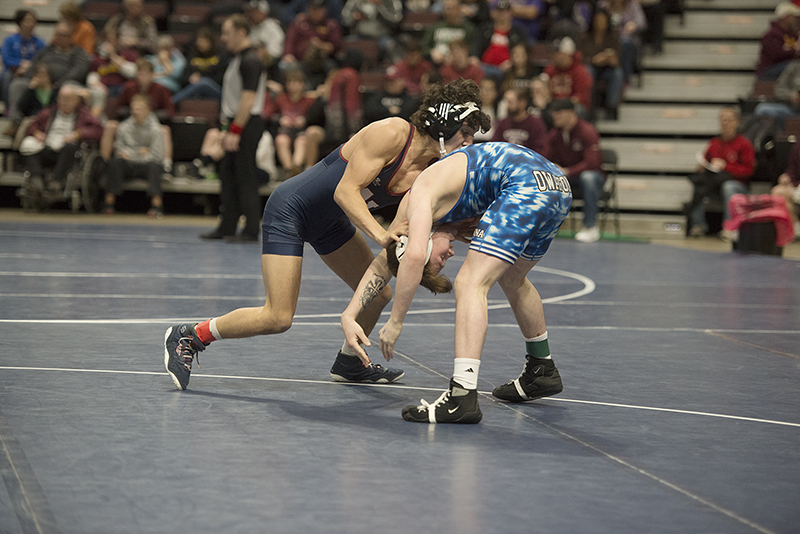 Junior Tucker Eriksmoen stuffs the head of his Owatonna opponent Friday afternoon. Eriksmoen pulled out the upset and beat the No. 9-ranked Kanin Hable in a 7-6 decision. – Tyler Julson/Albert Lea Tribune

Junior Tyler Barney lost his quarterfinal match at 170 pounds to Northfield sophomore Nickolas Mikula. After receiving a bye in the consolation bracket, Barney took on Austin eighth grader Mason Callahan and earned a first-period pinfall to move into day two.

At 195 pounds, sophomore Adam Semple lost his quarterfinal match to Faribault senior Dylan Lippert in a first-period fall. Semple went on to drop his consolation match in a 12-7 decision to Northfield freshman Quinn Ertz, ending his season with a record of 3-13.

Junior Trevor Ball lost his opening-round match at 220 pounds. Ball lost in a first-period fall to Faribault freshman Gabe Shatskikh. He moved into the consolation bracket, where he dropped his match to Winona senior Shawn Mugo. Ball ends his season with a 4-20 record.

Sophomore Carter Harmdierks lost his quarterfinal match at 285 pounds to Winona junior Zander Russert in a first-period fall. In the consolation bracket, Harmdierks beat Faribault senior Josh Lenway in a 10-1 major decision. However, Harmdierks fell in his next match to Rochester Mayo sophomore Gavin Pike. Harmdierks ends his season with a record of 2-13.

Wasmoen, Eriksmoen, Davis, Glazier and Talamantes all stay alive in the championship semifinals, while Indrelie and Barney are still in the consolation bracket. All still have a chance to make the state tournament. Wrestling on Saturday starts at 10 a.m. Check back with the Tribune for results as they become available. 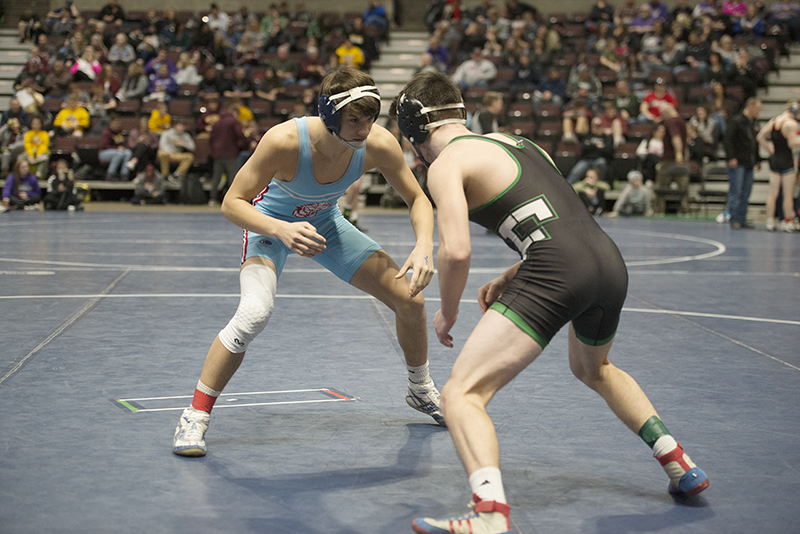