Wit of Wilde: Riverland presents ‘The Importance of Being Earnest’ 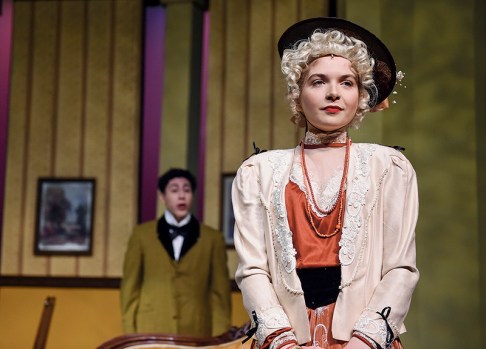 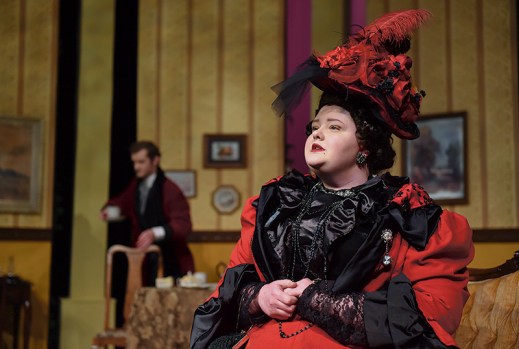 Pictured is Brianna Ahlbrecht playing Lady Bracknell in the Riverland production of “The Importance of Being Earnest.” - Eric Johnson/Albert Lea Tribune 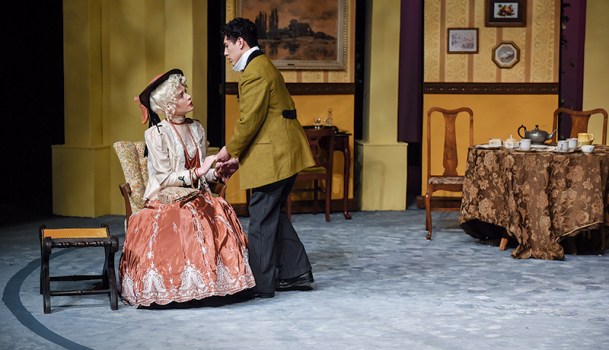 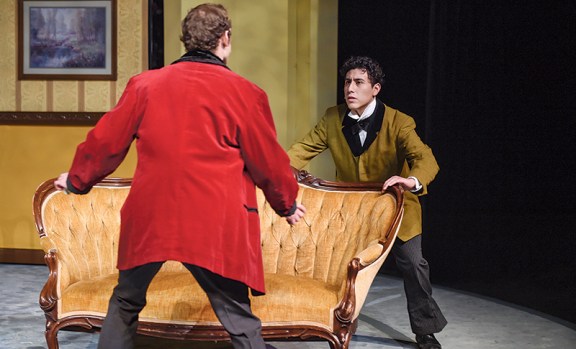 Oscar Quintero, playing John Worthing, goes around the couch with Ed Dreyer, playing Algernon Moncrieff, during rehearsal for the upcoming Riverland production of “The Importance of Being Earnest.” - Eric Johnson/Albert Lea Tribune

AUSTIN — Riverland Community College Theatre will perform its spring production, “The Importance of Being Earnest” by Oscar Wilde, from Wednesdaythrough March 1.

“The Importance of Being Earnest” has proven to be Oscar Wilde’s most enduring — and endearing — play, according to a press release. Jack Worthing and Algernon Moncrieff create alter egos named Ernest to escape their tiresome lives. They attempt to win the hearts of two women who, conveniently, claim to only love men called Ernest. The pair struggle to keep up with their own stories and become tangled in a tale of deception, disguise and misadventure.

Filled with witty Victorian aphorisms and Wilde’s own brand of wisdom, “The Importance of Being Earnest” remains one of theater’s most popular comedies.

“‘Earnest’ is an extremely funny play,” said director Susan V. Hansen. “Every character is different from what they seem to be. I love its satire of human response that still rings true today. Hopefully we can all laugh at ourselves a bit.

“‘Earnest’ is also a very good learning experience for the students,” she said. “It requires a study in stylization and comic timing.”

Some material may not be suitable for young children.

Show times are 7 p.m. Wednesday through Saturday and 2 p.m. Sunday. All shows will be performed at Frank W. Bridges Theatre in the East Building on Riverland’s Austin campus.

Individual tickets are $13 and currently on sale at www.riverland.edu/tickets 24 hours a day, seven days a week. The online ticketing system allows customers to pay by Visa, MasterCard, American Express or Discover.

Tickets may also be purchased at the Riverland box office, located in room E107 in the East Building of the Austin campus. Box office hours are 11 a.m. to 1 p.m. Monday through Friday and one hour before performances.

Riverland students receive two free tickets to each performance with a valid student ID. Contact the box office at 507-433-0595 or by emailing boxoffice@riverland.edu.