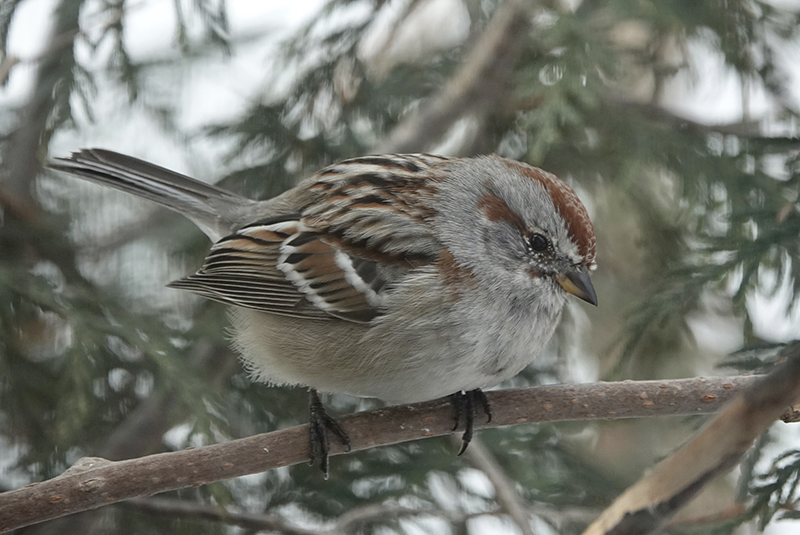 Pictured is an American tree sparrow in a tree. Snowmelt sends them north to the tundra. - Al Batt/Albert Lea Tribune

“Everything is nearly copacetic. I had a tough year today. I’m going to stop playing cards with Still Bill. It takes him forever to play a hand. That’s no surprise — his shadow runs off and leaves him behind. If Still Bill can’t sleep, it’s because he hadn’t been doing nothing hard enough. But the reason I’m never playing poker with him again is that he cheats.”

“It’s obvious. He never plays any of the cards I’d dealt him.”

I had been looking at some blurry photos of birds perched on clear images of tree branches. I searched my photos for something appropriate for requests from magazines and calendars. I couldn’t decide, so I went for a walk to clear my head.

In the ordinary process of noticing nature, I find amazement. Nature offers touchstones that help me navigate my life.

Judging by the tracks in the snow, a raccoon had gotten its steps in during the night. Skunks, raccoons and opossums don’t hibernate but hole up in sleeping places in burrows and elsewhere if the weather isn’t good for foraging or courting.

Red-winged blackbird males returned to call on territory. “No, you shut up,” they yell at the other males.

One crow listened to another whose call sounded important before angry voices welcomed me to the yard. The yard crows were indignant at the discovery of a great horned owl. Crows hate owls because owls love to eat crows.

Lorine Niedecker wrote, “A monster owl out on the fence flew away. What is it the sign of? The sign of an owl.”

A pair of compact birds, white-breasted nuthatches, moved up, down, and around a tree. I sometimes call a nuthatch a tree mouse. The male called a “who-who-who-who or what-what-what-what.” The active and agile birds often start high in a tree and move down it headfirst, probing into bark crevices for food. 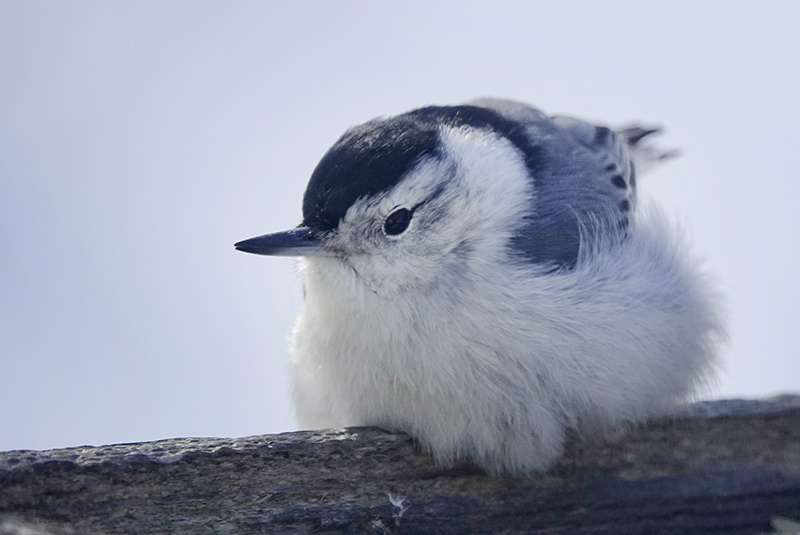 “Why do some birds stand on one leg more often than others?” They are more ambitious. They want to get a leg up on the competition.

“Do bald eagles wait until they have laid all their eggs before incubating?” No, incubation begins after the first egg is laid. meaning that in a nest where two eggs hatch, there will be the oldest sibling and the youngest sibling.

“Is it possible to tell male and female robins apart?” It can be difficult to tell them apart but there are subtle differences. Males typically have a darker head (often black) and the female has an overall paler color.

“What kind of a stomach does a bird have?” A typical bird’s stomach has two parts. The first has acidic juices that are good at breaking down things like soft-bodied insects, worms, soft fruits, and nectar. The second section is the gizzard, which has powerful muscles that crush and grind hard foods like acorns. The gizzard needs help to do its job. This help comes in the form of grit the bird has swallowed. A bird has a crop. The crop stores food temporarily and initiates the digestion process before food enters the stomach. It’s a thin-walled pouch at the base of the esophagus where birds store food before sending it to the stomach.

“Why didn’t Ben Franklin want the bald eagle to be this country’s national emblem?” Charles Thompson, one of the key designers of the Nation’s symbol, wrote that it was “born on the breast of an American Eagle without any other supporters to denote that the United States of America ought to rely on their own Virtue.” Benjamin Franklin was against the bald eagle being a national emblem. He said the bald eagle was a bird of bad moral character because of its tendency to steal fish from other birds and a rank coward when facing a kingbird.

“How far can a baby wood duck jump from a nest box and survive?” A duckling can take 65-foot leap of faith, maybe more, and waddle away happily into a new world.

Thank you for stopping by

“If you truly love nature, you will find beauty everywhere.” — Vincent Van Gogh

“Eventually, all things merge into one, and a river runs through it. The river was cut by the world’s great flood and runs over rocks from the basement of time. On some of the rocks are timeless raindrops. Under the rocks are the words, and some of the words are theirs. I am haunted by waters.”

— Norman Maclean in “A River Runs Through It”