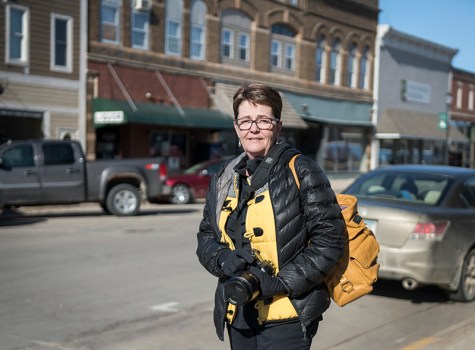 Lory Groe has been a fixture at numerous high school sporting events photographing the action over the years, and was named Volunteer of the Year by the Lake Mills Chamber Development Corporation in January. - Colleen Harrison/Albert Lea Tribune 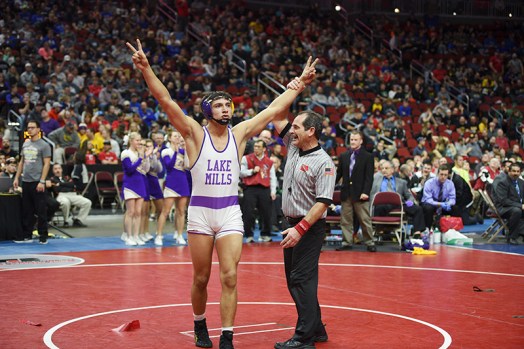 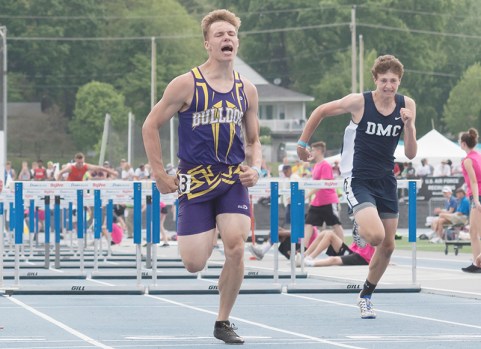 Lake Mills senior Grant Fjelstad crosses the finish line of the 110-meter hurdles in May 2018 at the Iowa high school state track and field meet. Fjelstad would be crowned the state champion with a time of 14.71. - Lory Groe/For the Albert Lea Tribune 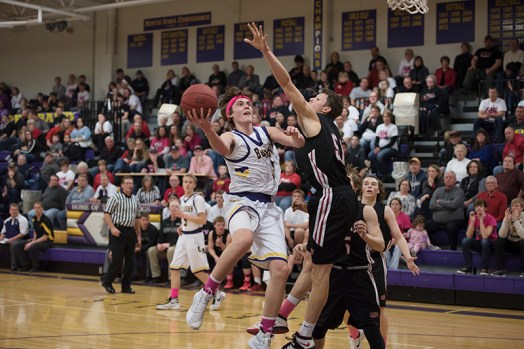 Lake Mills’ Granger Kingland shoots during a January 2016 game. Kingland broke the school's scoring record his senior year, and was also named the most accurate three-point shooter in Iowa during his high school career. - Lory Groe/For the Albert Lea Tribune 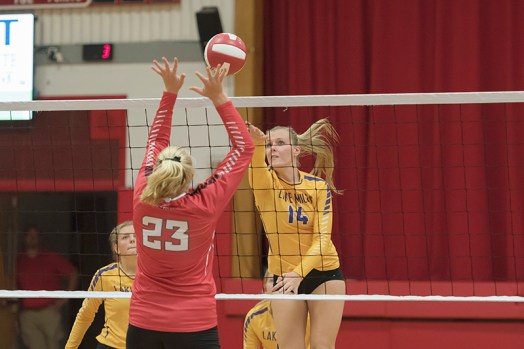 LAKE MILLS — A Lake Mills woman has been recognized for her role in promoting her community.

At the Lake Mills Chamber Development Corporation’s annual meeting in January, Lory Groe was named Volunteer of the Year. The award came as a surprise to Groe, who was given the award during her work day at Farmers Trust & Savings Bank as she was going to miss the chamber meeting to photograph a Lake Mills game.

“There’s a lot of people in the community that I think do more than I do,” Groe said.

Originally from Nashua, Iowa, Groe moved to Lake Mills in the ’80s. She and her husband, Dave, have four adult children between them and have nine grandchildren.

“It just kind of evolved,” Lory Groe said. “I like promoting the school.”

Those two grandchildren are now in college, but Groe has continued to photograph her younger grandchildren competing. While they’re set to graduate this spring, Lory Groe said her time photographing the Bulldogs is far from over.

While her grandchildren have participated in basketball and track and field, among other sports, over the years, Groe said she can’t pick a favorite one to photograph.

“Every time a new season comes around I think I like that one best,” she said. “I try to cover all of them because I enjoy them all.”

Groe said Lake Mills High School has a great tradition of being good at multiple sports, and she has gotten to witness a number of achievements. She photographed Slade Sifuentes winning back-to-back wrestling championships in 2016 and 2017, building a 113-match win streak to cap off his high school career while also helping the Bulldogs wrestling team reach two straight state duals appearances.

Multiple state track and field appearances for Lake Mills, and for her grandchildren, also stick out for Groe, and in early February she suspected the boys’ basketball team and the wrestling team would be making strong postseason runs this year as well.

“I’ve grown to know so many of the kids,” she said. “You get a connection with some of them.”

Groe first started trying her hand at photography when following her grandchildren in their different activities when they were younger. In addition to her growing reputation as a Lake Mills sports photographer, Groe now also photographs senior and family portrait sessions, and goes out to local community events as well, such as Reese’s Run and different benefits in the area, among others.

In addition to her community photography, Groe is also a past member of the Lake Mills Chamber Development Corporation, and is a current member of the Lake Mills chapter of the Philanthropic Educational Organization for women. She also serves on the Lake Mills Scholarship Committee, which was formed three or four years ago to award scholarships to Lake Mills students. She credited the bank she works for with being supportive of its employees performing community service, and news organizations such as the Tribune for building professional relationships with her through freelance coverage of the Bulldogs.

Groe enjoys being an active member of the community, and especially enjoys being able to photograph high school students as they live out their varsity accomplishments. So many parents of student athletes letting Groe know how much they appreciate her documentation is part of why she plans to continue following the teams after her own grandchildren graduate. The other reason is because she enjoys it herself.

“It’s really important to me to capture memories,” she said.

1980s: When Lory Groe moved to the Lake Mills area