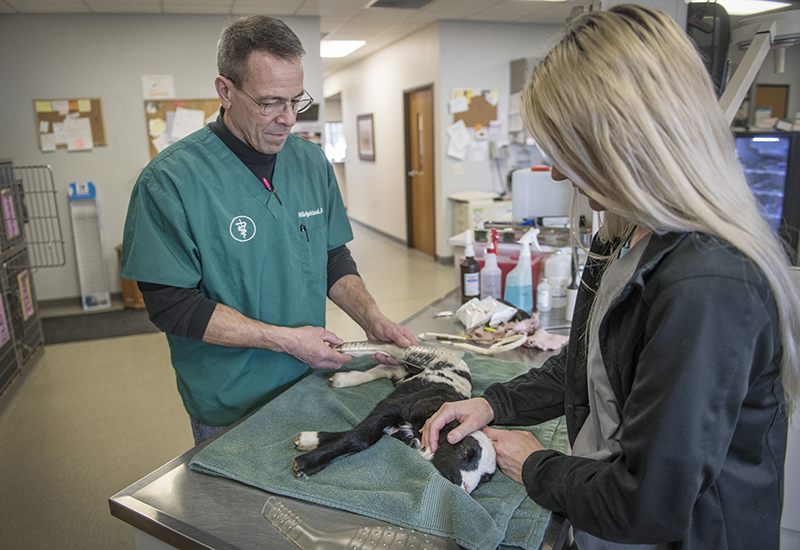 Clarks Grove Vet Clinic takes care of all types of animals, including both livestock and companion animals

CLARKS GROVE — On a mild, gray day in early February, a lamb drowsily bleats while laying on an exam table at Clarks Grove Vet Clinic.

The lamb has been sedated, as its two back legs were broken after being stepped on by a large heifer, or a young female cow. Dr. Mike Bjorklund is fitting the lamb’s legs for a cast, and the veterinarian’s prognosis is that as long as recovery instructions are followed and since the lamb was brought in right away for proper medical care, the young animal should heal back to 100%.

A few hours beforehand, Bjorklund removed a portion of a great dane’s diseased tail, and before that surgically removed pieces of a rubber toy a dog had eaten. It’s all just another day at the office for the veterinarian and part-owner of the clinic, and he wouldn’t have it any other way.

Bjorklund has practiced in Clarks Grove for 30 years, after spending his first year in the field at a clinic in New Ulm. Originally from Glenville, he obtained his Doctor of Veterinary Medicine degree from the University of Minnesota. He said he first became interested in pursuing veterinary medicine in high school, while dating the girl who would eventually become his wife, Jackie. Her father was a dairy farmer, and Bjorklund ended up spending a lot of time on the farm and around the animals when they were dating in high school.

“She’s the best thing that ever happened to me,” he said. 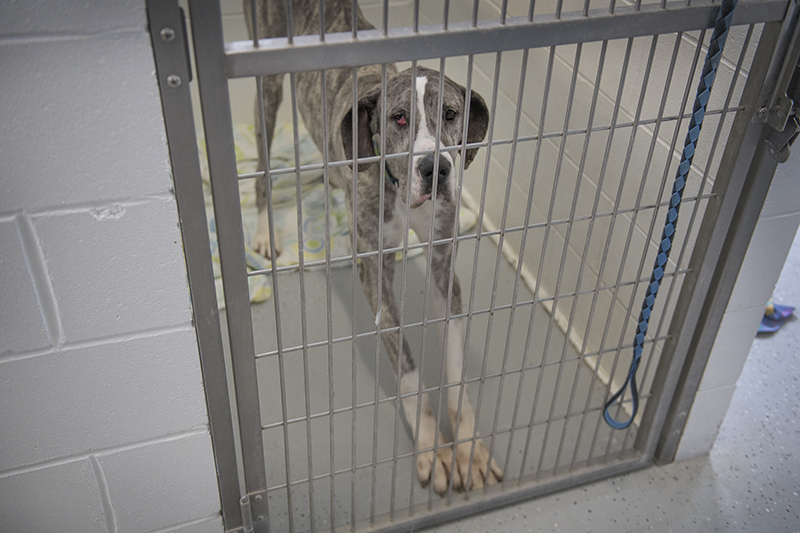 Clarks Grove Vet Clinic also boards dogs and cats. The dog pictured was recuperating at the clinic after having a diseased portion of its tail amputated. – Colleen Harrison/Albert Lea Tribune

The Waseca clinic was built new in 2001, and the Clarks Grove clinic was remodeled and added on to in 2006, he said. The remodel added a breakroom, three exam rooms, a large surgical suite as well as a large treatment area, a pharmacy, boarding facility and a treatment area with stables for horses.

When Bjorklund first started in Clarks Grove 30 years ago, he said about 70% of the animals the clinic treated were food animals or livestock and 30% were companion animals, such as dogs, cats or horses. Now, the tables have turned, with about 75% of the animals the clinic sees being companion animals. Bjorklund attributed the drop in treating swine and cattle to a consolidation in the livestock industry — many places are farming more and more of only one or two kinds of animals, and hiring veterinarians that tend to specialize in those specific animals. 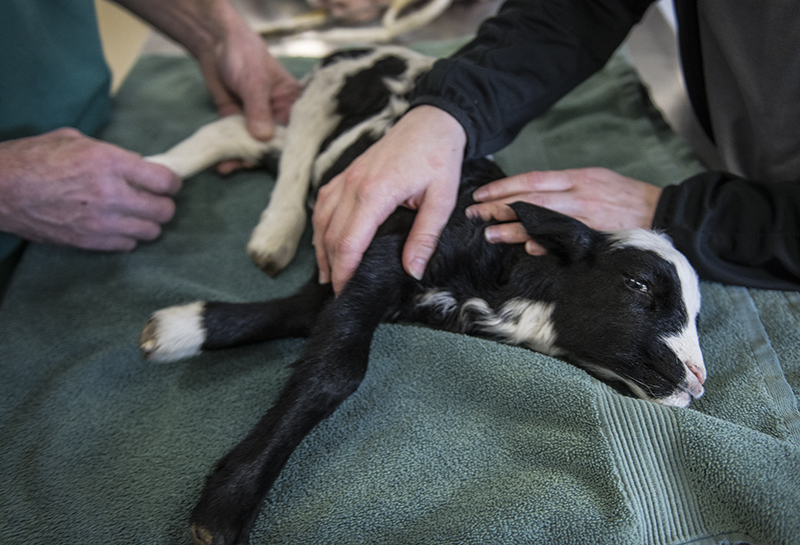 The lamb’s back legs were broken after it was stepped on by a large heifer, Bjorklund said. As long as they receive proper and prompt medical treatment, and care instructions are followed while they’re recovering, the veterinarian said young animals can heal back to 100%. – Colleen Harrison/Albert Lea Tribune

If Bjorklund had to pick a favorite area of what he practices, he said it would be the surgery aspect, especially orthopedic and soft tissue surgeries. But, he said he loves just about every aspect of working with animals.

“I really do enjoy the appointments — the variety we see and the great clients we work with,” he said.

For Bjorklund, the most challenging part of the job initially was learning the office aspect. He said they don’t tend to teach veterinarians about managing personnel, managing taxes or handling disgruntled clients, but he said that’s knowledge he has gained on the job over time.

Another challenge to the job can be presenting clients with options depending on their budget to treat their animals. Economic issues can dictate what they’re able to do at times.

“It’s a challenge to do the best we can with the least we have,” he said.

With a career spanning three decades, Bjorklund has his share of stories. One he recalled was when he went to a farm to vaccinate cattle. The last heifer to vaccinate got so spooked it climbed a ladder into a hayloft of the barn. As Bjorklund and those assisting him went up into the loft after it, he said the cow was running at them, essentially trying to hurt or kill them. So, one of the people Bjorklund was with started stacking hay bales under a loft door, while another person went up and spooked the cow enough that it ran over to where the loft door was, falling through and dropping about 15 feet onto the stacks of bales uninjured.

“It keeps life interesting, getting to work with not only great animals but great owners and great employees,” Bjorklund said. 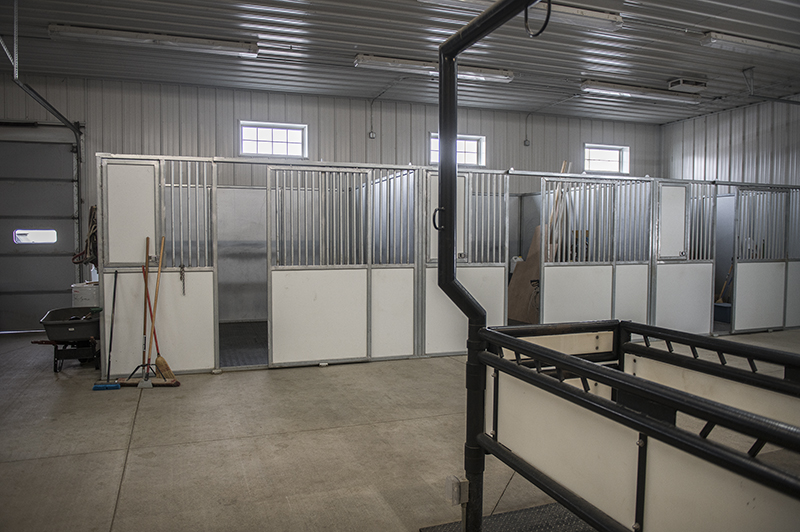 When the clinic treats horses, it encourages owners to bring the horses to the clinic, as it has a stables area where horses can be treated and cared for more efficiently and safely. – Colleen Harrison/Albert Lea Tribune

30: Years Dr. Mike Bjorklund has been a veterinarian at Clarks Grove Vet Clinic

75: Percentage of the animals the clinic sees that are companion animals, such as cats, dogs and horses

5: Number of veterinarians at the clinic, three of whom work part time

What does Dr. Mike Bjorklund like about practicing as a veterinarian in Clarks Grove?

“I really do enjoy the appointments — the variety we see and the great clients we work with,” he said.