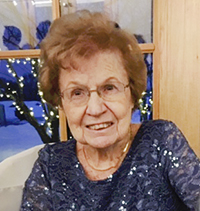 She is preceded in death by her husband, H. Lee Berghoff; her son, Chris (Laura) Berghoff; and her parents Martin and Catherine Galli of Detroit.

Kitty was born Nov. 11, 1923, in Detroit to Catherine and Martin Galli. She had a sister, Clara, and brother, Martin; both preceded her in death.

Kitty and Lee married and moved several times, eventually settling in Albert Lea in the mid-’60s, where they raised their five children. Kitty sold real estate and Lee was employed by Scottsman Ice Machine Manufacturer, initially as an engineer and eventually as its president.

Once their children moved out, Kitty and Lee relocated to Edina. Kitty continued her career in real estate until Lee’s death in 1989. Kitty later moved to Excelsior until 2017, at which time she moved to Beehive Assisted Living Home in Duluth to be near Karen and Paul.

In addition to her real estate career, Kitty enjoyed golfing, playing cards, gardening, reading and was actively involved in sailing with Lee; they spent many enjoyable weekends in Lake City and in Bayfield, Wisconsin, sailing.

The Berghoff family would like to extend their gratitude to all the staff of Beehive Assisted Living Home, Essentia Hospice Care and Mary Jean Cody (Kitty’s caregiver in Excelsior). In lieu of flowers, memorials may be made in Kitty’s name to Lewy Body Dementia Awareness Research-MHCF, P.O. Box 1974, Morgan Hill, CA 95038 — an organization focused on increasing awareness of Lewy body dementia.

There is no public service planned, only a private gathering of Kitty’s immediate family.