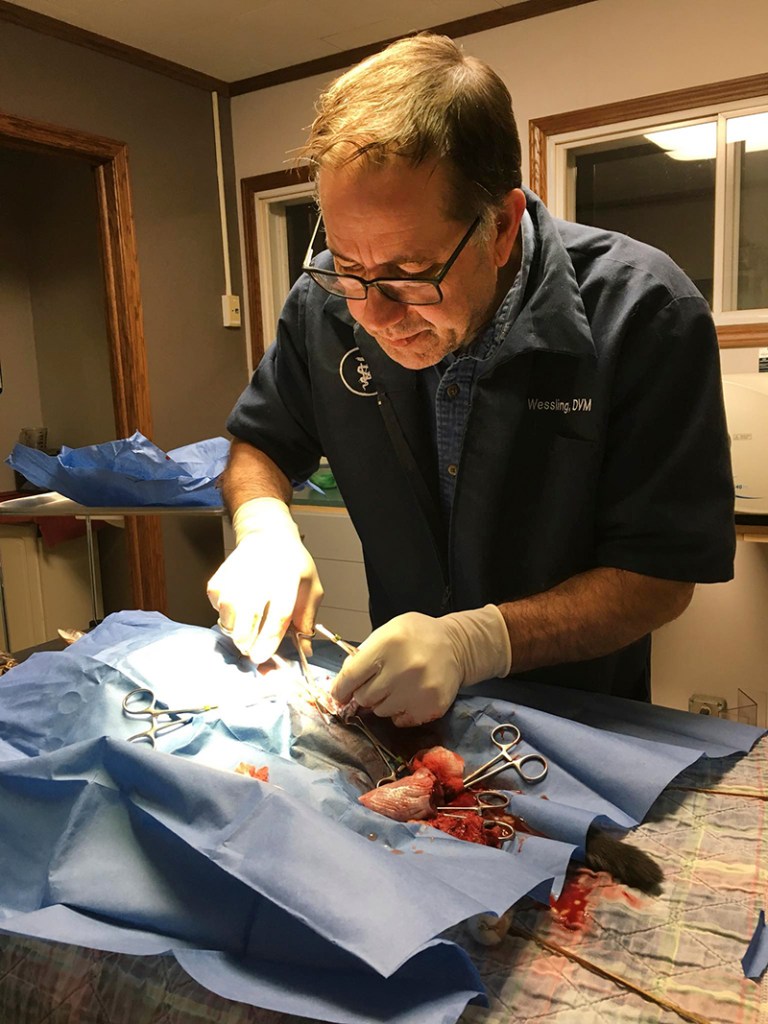 Dr. David Wessling of South Central Pet Care performs an emergency C-section on a cat from the Humane Society of Freeborn County in December 2018. - Provided

Christa DeBoer has been the director of the Humane Society of Freeborn County since June 2006, and had been fostering for the organization for 10 years at that point. At the time she became the director, DeBoer was working part time at South Central Pet Care, a veterinary clinic that had opened in Albert Lea the year before. That relationship helped pave the way for a strong connection between local veterinarians and the animal shelter.

The Humane Society has had veterinarians from South Central as well as Clarks Grove Vet Clinic and Albert Lea Veterinary Clinic treat the animals the shelter cares for.

“All the vets in town work with us well,” DeBoer said. “… They all have a role to play in what we do down here.”

Dr. Don Larson, a veterinarian for 45 years, donates his time when not working at South Central to the Humane Society. He routinely performs spays at the clinic for shelter animals before heading over to the Humane Society to treat any animals who need to be neutered or are feeling under the weather. The shelter pays for materials and medication used in the routine spays, neuters and checkups Larson performs when donating his time.

Larson said he is happy to provide the services to the shelter, especially when he can provide the same quality of care for a lower price due to donating his time. He said the Humane Society more than deserves the help.

“They go above and beyond and do a very good job,” Larson said of the shelter staff and volunteers.

DeBoer said it’s a huge help to the shelter that Larson will come to them when possible, otherwise shelter volunteers would be dedicating even more of their time to transporting different animals back and forth to the clinic. 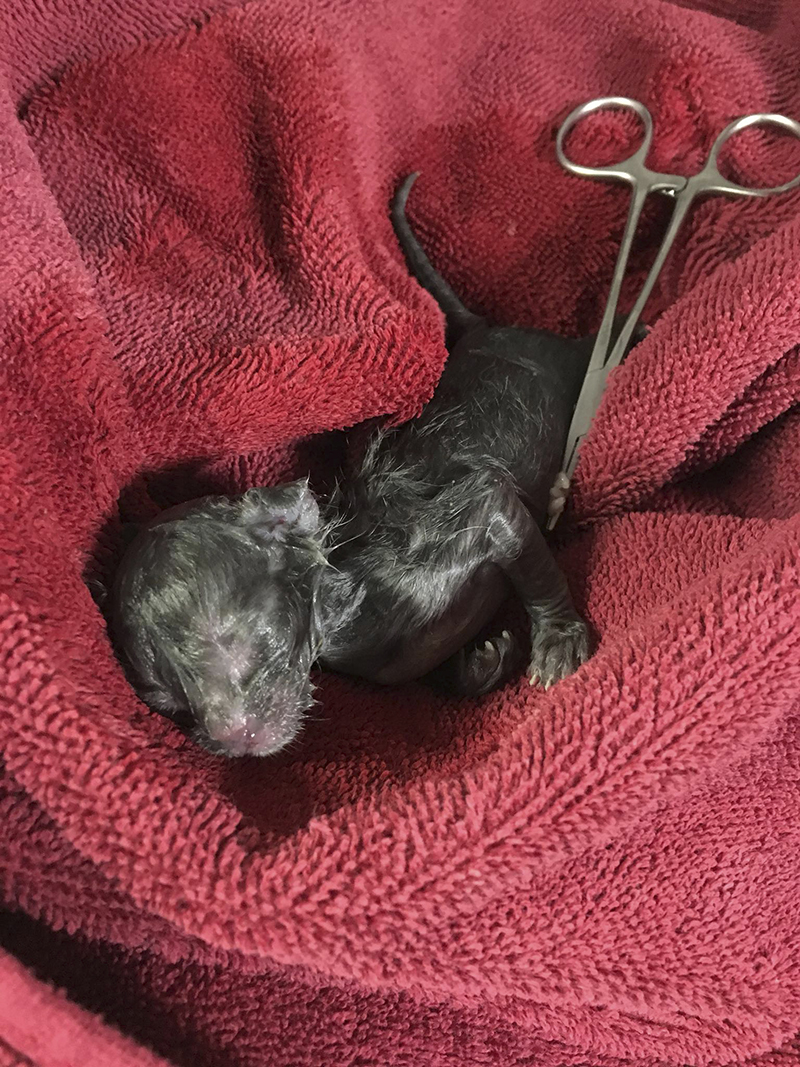 The veterinary clinic allowed the Humane Society to fundraise to pay the outstanding bill for the emergency surgery, plus spaying the mother and the five kittens once they were old enough. – Provided

Clarks Grove has helped with an abundance of dog surgeries for the shelter, typically because it tends to have more veterinarians on staff at one time, DeBoer said.

Different clinics have helped when the Humane Society has needed assistance with larger animals, too, such as horses.

“Everyone’s got their own kind of niche,” DeBoer said of the different ways the clinics all work with the shelter. “… As an all-encompassing thing, they’re all very, very helpful to us.”

The area clinics have also helped shelter animals in times of emergencies.

“We all work together on that,” said Dr. David Wessling, a veterinarian at South Central with 40 years of experience.

In December 2018, a pregnant cat ended up needing an emergency C-section when two of her five kittens would not come out naturally. Wessling met shelter staff at South Central late at night and successfully delivered the kittens, and eventually spayed the mother and the kittens once they were old enough. The clinic let the Humane Society fundraise to pay the outstanding bill from the unexpected procedure, and DeBoer said all three clinics have been great about billing the shelter when an unexpected visit comes up.

“They’re very accommodating,” DeBoer said. “That whole, ‘Uh oh, it’s 10 o’clock at night,’ and they come in and help out. … They honestly give back to the shelter in so many ways that people don’t even realize.”

Wessling said the majority of ways he has worked with animals from the shelter revolves around spays and neuters, but that he has also seen his fair share of broken legs, abscesses, lacerations and respiratory illnesses when treating animals the Humane Society has rescued. He said he routinely sees skin irritations or diseases from animals not having proper flea or tick prevention before being rescued, as well.

“We want to keep them healthy so they can be rehomed,” Wessling said. 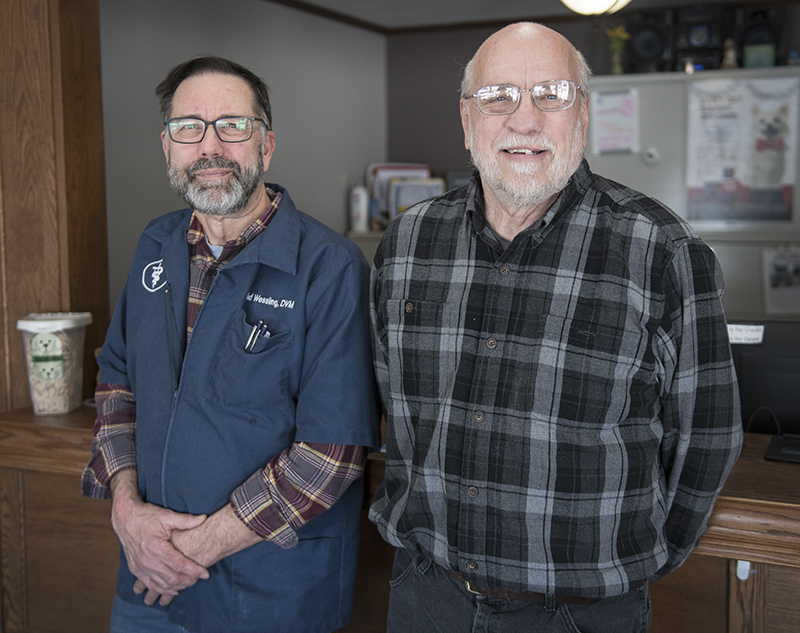 Dr. David Wessling, left, and Dr. Don Larson are veterinarians at South Central Pet Care who have worked a lot with animals from the Humane Society of Freeborn County. – Colleen Harrison/Albert Lea Tribune

Larson recalled a time last October when he came in after hours to treat an injured dog, who turned out to have had some kind of poison in its system. Larson said a shelter volunteer helped him as Larson did what he could for the dog, who ultimately passed away, but was cared for and without pain in its last moments.

“We did the best we could,” Larson said.

DeBoer remembered a time the Humane Society took in a dog who had been found full of puncture wounds inside a crate in a basement. The situation was a mess when the dog was brought in, DeBoer said, and shelter staff took it to the Clarks Grove clinic.

“Talk about fantastic,” she said. “They really poured themselves into his care.”

The veterinary services the shelter uses are not free and shouldn’t be, DeBoer said, and she hopes the shelter is giving the clinics something in return through the consistent business from the Humane Society as a result, because she appreciates their support.

“I appreciate all the vets in town,” DeBoer said. “We surely would be having a huge hardship, had they not all worked with us.”

Wessling said the shelter not only provides the clinics with business, but provides a much-needed service in the area itself.

“It’s giving an opportunity to all the pets to have a healthy start,” he said. “They help the community by giving them a place to go with healthy pets.

“It is a vital service to the area.”

2006: Year Christa DeBoer started as the director of the Humane Society of Freeborn County 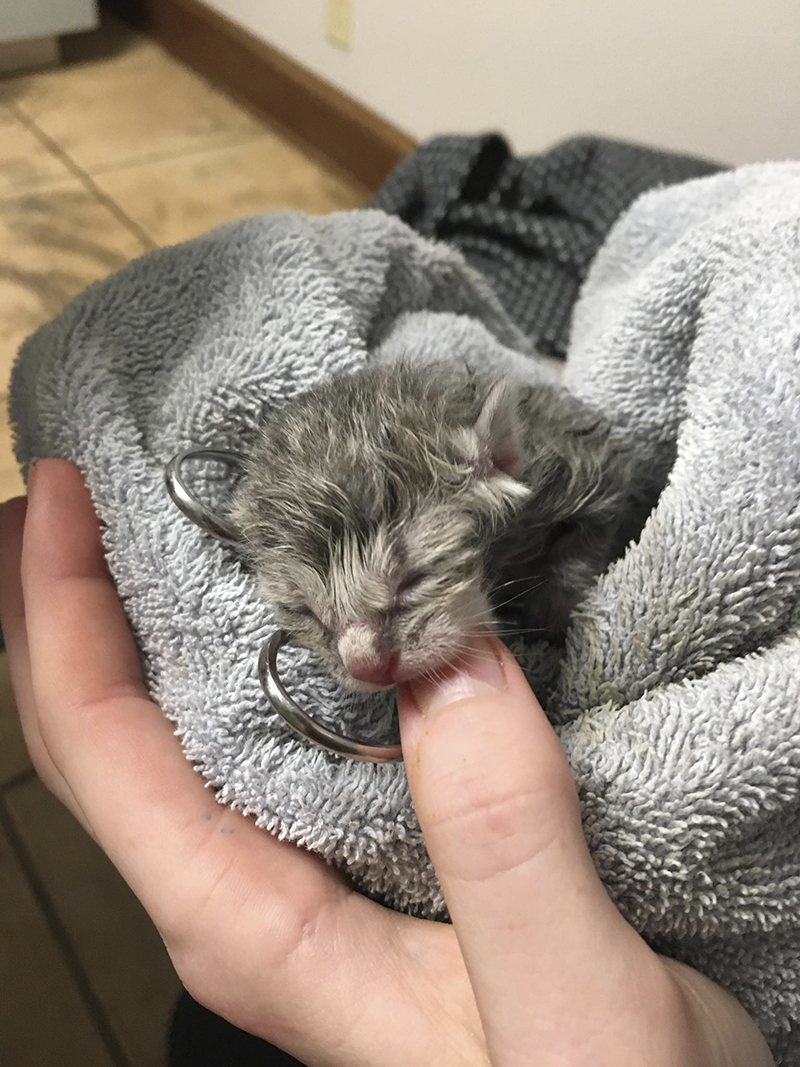 The cat Wessling performed the emergency C-section on in December 2018 was able to naturally give birth to three of her kittens, but two needed surgical help to come out. – Provided

Change happens inside the voting booth