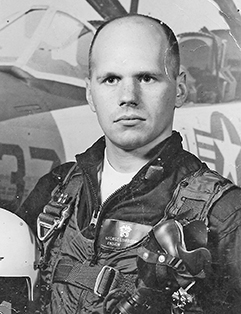 When he was about to graduate college in 1967, during the height of the Vietnam War, Lundstrom knew his draft permit was going to be up. Instead of leaving it to chance, he decided to speak with some recruiters and learn about his options.

“I thought flying over the jungle seemed more appealing than making my way through the jungle,” Lundstrom laughed as he recalled his conversation with some naval aviation recruiters. “I had always been interested in flying and had thought I might like to be an airline pilot at the time, so this seemed like a good way to go. I passed those tests and got signed up.”

Because of the lengthy process of aviation training, Lundstrom never ended up in Vietnam after all. He did, however, come out of the Navy after four years with a deep respect for those who served in combat, something that would lead to him signing up to serve his country again decades later.

On Tuesday, Lundstrom will share his experience of becoming a Navy pilot during the Owatonna Veterans Open Roundtable beginning at 7 p.m. at Good Shepherd Lutheran Church. Highlights from his presentation will include the particulars of flight training and what it was like to land a plane on an aircraft carrier.

“Your landing area (on a carrier) is 200-feet long and you have to put you plan within that span,” Lundstrom said. “It only takes your average Navy plane one to two seconds to cross that 200 feet, so if you lay your glides to slow or two fast it can make the difference of 6 feet that you don’t have.”

Though the task may seem daunting, Lundstrom admitted he was so focused on what he was doing that he can’t remember if he was nervous. He had already performed 10 practice flights on land, though, and Lundstrom added that the weather seemed to be perfect on the day of his first carrier landing.

“I never had to do any at night or in bad weather,” Lundstrom said. “That ups the ante quite a bit, I might have been nervous for those.”

If time allows, Lunstrom is hoping to also share some stories from his time in the Army National Guard, which he enlisted in at the age of 64.

“People with special skills like lawyers, chaplains and dentists like me could join up to 60 years old,” Lundstrom said, explaining he was visiting with a recruiter during a dentist convention in Arizona to pass the time between his meeting. “He said that they really desperately need dentists and that he could probably get me an age waiver. If I could still pass an Army physical they would let me in.”

Lundstrom couldn’t help but feel called to serve, saying he felt serving in the Guard for four years to do exams on soldiers before they were deployed overseas was the least he could do.

The Veterans Open Roundtable in Owatonna meets at 7 p.m. on the second Tuesday of the month at Good Shepherd Lutheran Church. The events are open to the public with a suggested free will donation.