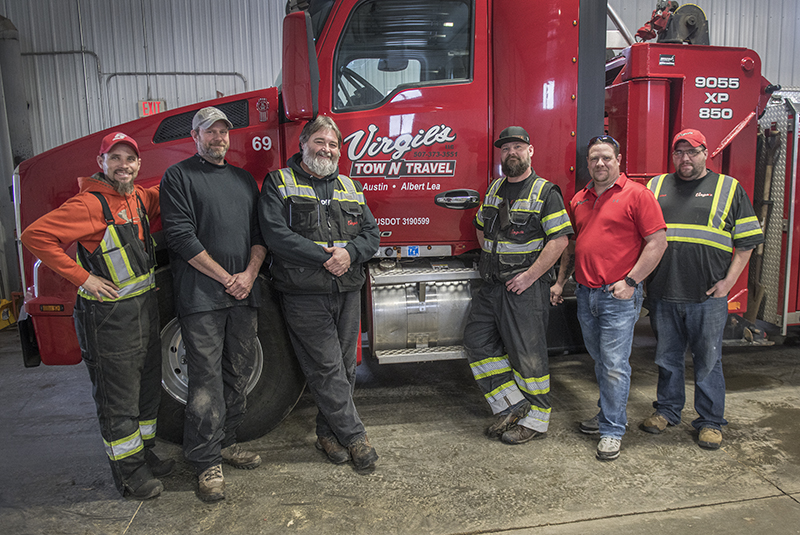 One local business has a new name, but its services within the community are staying the same.

What used to be Allen’s Tow N Travel became Virgil’s Tow N Travel on Dec. 1. Virgil’s also has locations in Rochester, Austin, St. Paul and in the Duluth and Superior, Wisconsin, area.

While ownership transitions can be tough at first, Virgil’s Heavy Duty Manager Thaddeus Ellenbecker credited the Albert Lea employees with making the transition go as smoothly as possible.

“These guys in Albert Lea are phenomenal,” he said.

The Virgil’s Albert Lea location had seven operators as of mid-January, with plans to possibly add more. Three of those drivers have been at the location since it was under the Allen’s name — all Allen’s employees were offered jobs under the new ownership, according to Albert Lea Manager Justin Iverson.

Iverson has been at the Albert Lea location for about 15 years. He said being at the cross section of interstates 90 and 35 keep the business plenty busy, in addition to the contract Virgil’s has with the city, meaning it’s called upon by law enforcement when vehicles need to be moved off the road following accidents or need to be impounded. The business also does its fair share of work with farmers when their vehicles or equipment get bogged down in the fields.

Winter is always their busiest season, Iverson said, and the winter of early 2019 was the busiest he has ever seen, especially when the interstates were closed — multiple times. Even when law enforcement puts a towing ban out when weather is too hazardous, Iverson said they will go out to pick up stranded drivers to get them someplace safe, and will then go retrieve cars once the towing ban is lifted and bring them to where the motorists waited out the storm. Unpredictable weather and other situations can make for some odd hours.

“We’re on call even when we’re not on call,” Iverson said. 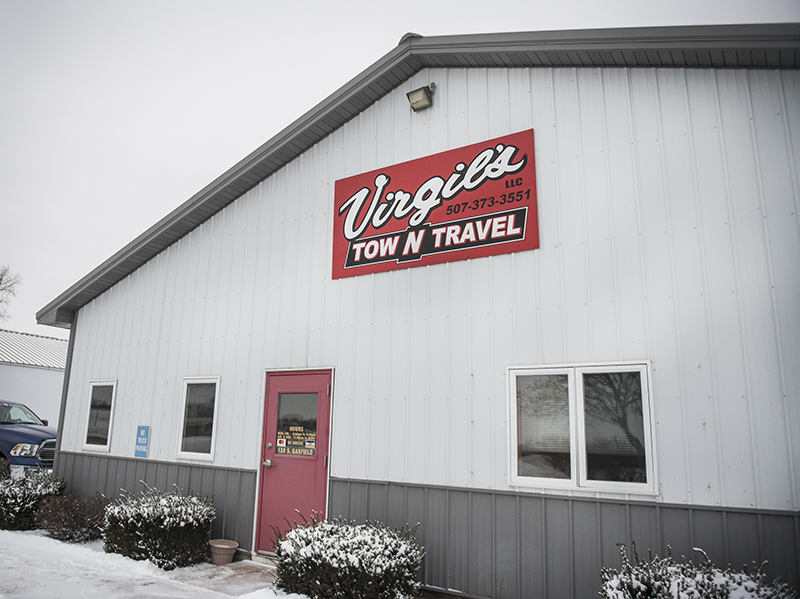 What customers might not understand about the towing business is how expensive it is to operate, according to Ellenbecker. The overhead cost of a towing business is extreme, he said, with some trucks costing up to half a million dollars, on top of the cost of insurance/liability and employing good operators while keeping them safe.

Ellenbecker said being a tow truck operator is one of the five deadliest jobs. He said distracted driving is a big factor in the danger of the job, and the fact that operators don’t have much control over their environment. They have to pull over wherever vehicles are stranded or left, no matter how blind a turn may be or how tight the shoulder is on a highway. Ellenbecker said operators often put themselves in dangerous situations because they’re putting their customers first.

“Our guys are there to help, to provide a service and to get people to a safe place,” he said. “It’s an extremely dangerous industry.”

While the career path they’ve chosen can be dangerous, Iverson said they’re exactly where they want to be.

“Helping people is what we do,” he said.

While Virgil’s in Albert Lea continues to offer all the services Allen’s did, it will also expand on those services. According to Virgil’s Communications and Dispatch Manager Jon Douglas, the Albert Lea business will now be a full-service hub for AAA. Part of that full-service will include battery service, which Dougls said is about 40% of AAA’s business. All Virgil’s trucks will have new batteries on them to replace batteries on scene for vehicles that need them, if their battery testing determines that to be the case.

Douglas credited how smoothly the transition has been in Albert Lea to how familiar and connected the employees are to the area. They always know where to go, he said, most of the time without addresses and just using cross streets. They fit well into the community focus the company strives for, Douglas said, and Virgil’s hopes to be a community ally when it comes to fundraisers and other local efforts.

Ellenbecker added that Virgil’s always welcomes customer and community feedback, and is always open to suggestions on ways to continue to better provide and improve services.