Prairie Profiles: A passion for people 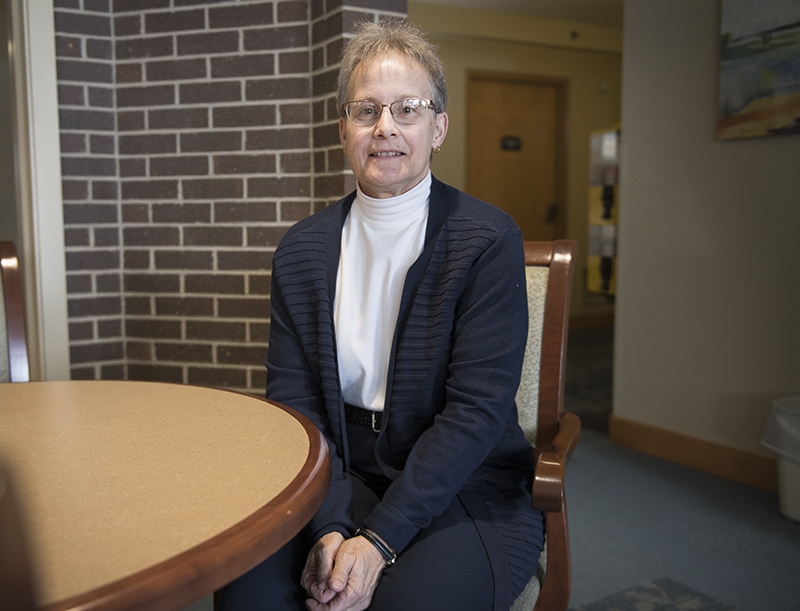 Freeborn County has named Marilyn Claassen to be this year’s recipient of the Rose Olmsted Advocacy Award. Claassen was recognized for her extensive work advocating for the elderly and other efforts she has made in the county.

Claassen said she had no idea she was even being considered for the award and she “must be doing something right.”

Claassen is the activities director at the Thorne Crest Senior Living Community. The daughter of two Thorne Crest volunteers, her first job out of high school was with Thorne Crest’s housekeeping department, and she returned there every summer while studying physical education and gerontology at the University of Wisconsin, LaCrosse.

As activities director, Claassen organizes trips for shopping and attending civic organizations for approximately 130 residents in assisted living, transitional care and the nursing home. She organizes the daily activities for residents at Thorne Crest too. She said her goal is to ensure that each resident’s retirement years are as high of quality as they can be with as little stress as possible.

“When I see a resident in need of something, or if their family member needs to be called or if their pastor needs to be called, I make sure that I’ll do that,” she said. “If they need something I’ll make sure they can get things they need. If someone is having a hard time getting someplace they want to go to, I’ll assist them. It’s hard sometimes, but I’ll make sure their travel is as safe as I can get it and it’s an enjoyable evening for them.”

Claassen recalls a fellow Twins fan, a man dying of cancer, who was living at Thorne Crest. The Twins Winter Caravan was on tour meeting fans in the region and one stop was going to be at a Holiday Inn in Austin. Claassen called the resident’s daughter in Minneapolis to help arrange the trip. The two women packed him in warm clothes and blankets and were off.

“The players were unbelievable to this gentleman; I just couldn’t say enough for the Twins organization that night,” Claassen said. “And we stayed over, we came home and the next day he died. So he had a last fun evening with something he just enjoyed so much. I’ll never forget that, not ever.”

After fulfilling a childhood dream of joining the ambulance service, she volunteered her time at the Relay for Life cancer walk, staying overnight in case any medical treatment was needed.

“I did this for many years and just to be there — it’s such a powerful experience going to the Relay for Life,” she said. “People that have survived cancer, it’s just amazing and you want to be there and support them when they’re there.”

Claassen worked for the ambulance service for 26 years and still teaches CPR training for American Heart Association  to daycare providers and other staff at Thorne Crest.

Her third job, staff assistant at Bonnerup Funeral Service, follows the thread of her caring for people in need. Claassen said she’s learned a lot from the staff at Bonnerup on helping people deal with grief. Spenser Brackley, the managing funeral director, said Claassen was “just overall a wonderful person” and described her work as “second to none.”

“The great thing is a lot of people recognize her from Thorne Crest so they’re walking into a familiar face whether it’s Thorne Crest or from St. Theodore church or any other thing she does in the community,” Brackley said. “So that I think that warmness, that familiarity to the community, I think people really enjoy it … She genuinely loves and enjoys people, and we love having her as a part of our funeral home.”

Said Claassen, “All three of these jobs I have worked all at the same time. It’s just jobs that I enjoy doing, it’s not like work. It’s just a passion of mine being there for people, helping people and being part of people’s lives.”

Claassen even continues to help people after they pass on by mowing the grass at St. Theodore’s cemetery and looking after the gravestones.

“That’s another passion of mine too: I respect the graves where folks are buried, and for me to have it look the best it can look is just something I really believe in. So I volunteer all summer long and help with the mowing,” she said.

Claassen grew up in Albert Lea with her parents and brother, Mark. She said her mother, an office worker at the Wilson & Co.  meat packing plant, and her father, a boiler engineer for the Albert Lea School District, never hesitated to help someone in need. As she followed the example set forth by her parents, helping others became second nature.

Claassen will be formally presented with the Rose Olmsted Advocacy Award at the Freeborn County Board of Commissioners meeting Tuesday morning.

A statement from the county included testimony as to Claassen’s “dedication to advocacy of the elderly” and “quiet efforts to uphold the highest standards of living possible for each individual she works with.”

County Recorder Kelly Callahan said the award, established in 2015, celebrates Rose Olmsted’s decades of work with Freeborn County primarily in crime victim advocacy and crisis response. While he was not involved in the selection process, after listing off Claassen’s work in the community he said, “She’s pretty well qualified to get the award.”