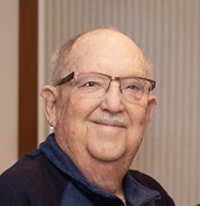 He leaves his wife of 48 years, Kathleen (Sweeney) Nelson; his son, Josh, and his wife, Tracy (Kochis); his son, Jerrod, and his wife, Theresa Mensinger; three grandchildren, Sawyer, Lilian and Danielle; and numerous nieces and nephews and many close friends.

Born in Heron Lake and raised in Albert Lea, the son of Merrill and Mabel (Johnson) Nelson, he resided in many locations, including Hillsboro, North Dakota; and Graceville, Wabasha, Albert Lea and Dilworth in Minnesota.

He was preceded in death by his parents and in-laws Roger and Edna (Mohr) Sweeney.

In his early years, Cannonball could be found on a baseball diamond somewhere on the north side of Albert Lea or pursuing the rank of Eagle Scout. After graduating from Albert Lea High School in 1957, he attended Luther College, graduating in 1961 with a bachelor’s degree in history and physical education. He was actively involved in athletics in both schools, participating in football, baseball, hockey and basketball. He also discovered his life-long passion of coaching while at Luther College as a student coach.

After graduation, Dick pursued a teaching career. He was hired as a coach and teacher first in Graceville, then in Wabasha, where he taught social studies and history and coached football, wrestling and track and field. While teaching in Wabasha, he met his wife, Kathleen, who was also a teacher. They were married in 1972 in Edgerton, Wisconsin.

After he retired from teaching and coaching in 1977, Dick’s focus moved to the sale of deferred tax compensation. He not only took pride in his business, but truly relished the friends he made during his time in the business, including many county employees in southeastern Minnesota and northeastern Iowa.

Dick had a passion for athletics, sports, travel and socializing. He could be found at the local golf course most days during the summer and he never missed the opportunity to meet for morning and afternoon coffee wherever he lived. He would also never miss a hand of cribbage, no matter where it was played. He globetrotted with his wife and friends in his later years, visiting all parts of the world. An avid sports fan, he never missed a game — be it Vikings, Twins, Gophers or in later years the North Dakota State University Bison. He and his family have many fond memories of watching games together.

Even more so, Dick was a wonderful grandfather to his grandchildren. He never missed an opportunity to attend a birthday party, holiday or just spend time with them. Even though he may have wanted to seem like the tough guy, there was no one more loving or committed to family. He will be fondly remembered and missed thoroughly by those who loved him.

A gathering will be from 2 to 4 p.m. March 14  at Abbott Funeral Home in Wabasha with a private burial to follow. Memorials can be sent in Dick’s name to an organization of the donor’s choice.

Services are entrusted to Abbott Funeral Home & Crematory in Wabasha.  Words of sympathy or remembrance may be left at www.abbottfh.com.