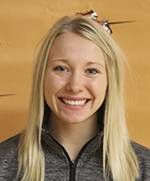 Woodside was a first team selection on the All-Decade team, which was compiled and released by the university’s athletic department.

Woodside, who graduated from Albert Lea in 2014, played for the Jimmies from 2014-18 and totaled 1,122 points over her career, which landed her in 14th on the program’s all-time scoring list. She amassed 484 assists in her collegiate career, which was second all-time in program history. She also totaled 342 rebounds and 170 steals during her time with the Jimmies.

“It’s such an honor to be selected as one of the players on the All-Decade team,” Woodside said. “I was able to play alongside some of the others selected and it really just brings back all of the memories and how thankful I am that UJ brought me such great teammates and friends.”

During her four years at Jamestown, Woodside played in 127 games and was a starter in 90 of them. She averaged just over 25 minutes a game and garnered a 40% field goal percentage and nearly 34% from three-point range.

As a 5-foot-3-inch guard, Woodside was named the North Star Athletic Association Defensive Player of the Year in her sophomore and senior seasons (2016 and 2018). She was also the North Star Athletic Association Player of the Year, named to the All-Conference team and to the second-team All-American for the 2017-18 season. She was named to the second team All-Conference her junior season.

Woodside recorded single-game career highs of 28 points, 11 assists, eight rebounds and six steals. The Jimmies were 113-23 during her four years with the program, including three NSAA regular season and conference tournament titles.

Some of her favorite memories on the team include the 5 a.m. workouts, making the national tournament every year, Thanksgivings spent with her teammates, and their holiday trips to Florida and San Francisco. She said the times off the court and the lifelong relationships she formed will always stick with her.

Woodside also offered up some advice for any high school athletes who want to succeed at the college level.

“You need to decide if you’re going to be all in,” Woodside said. “It’s tough to balance a college sport and school, but it is doable if you want it bad enough. Everyone at the college level is a good player, and you’ll always have to be putting in extra time. So while you’re still in high school and have some time, use it to your advantage. Put in the extra work and lead by example. Not only will you be getting better but your teammates will hopefully want to follow in your lead.”