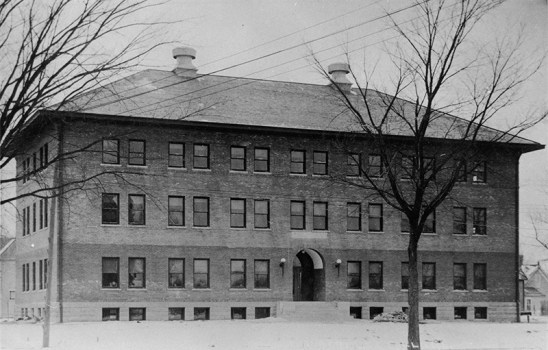 The Abbott School, built in 1909 and 1910, was used as a temporary hospital during the Spanish influenza epidemic in 1918. - Photo Courtesy Freeborn County Historical Museum 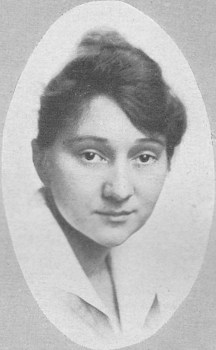 American Red Cross nurse Effie Larsen of Clarks Grove died in 1918 of inluenza while assigned to a base hospital in Camp Dodge in Iowa. - Photo from the Freeborn County World War I book 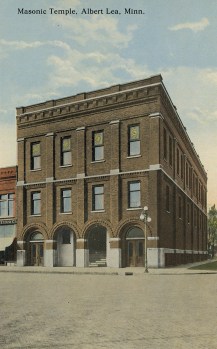 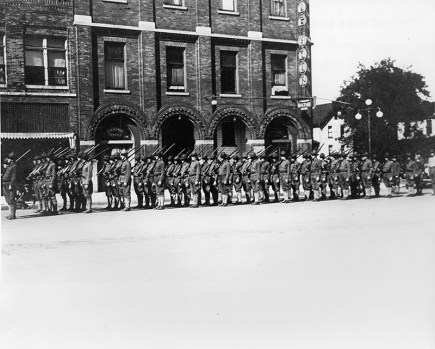 World War I military formation on Broadway in front of the Masonic Hall. Circa 1917 or 1917. - Photo Courtesy Freeborn County Historical Museum

The COVID-19 pandemic is not the first worldwide health emergency that has affected residents of Freeborn County on a local level. From 1918 to 1919, the Spanish influenza epidemic resulted in the deaths of between 25 million and 50 million people across the globe — more than the casualties caused by World War I itself.

According to a column that appeared in the Albert Lea Tribune Nov. 4, 1994, by former writer and columnist Ed Shannon, the American part of this epidemic was reportedly first diagnosed at Fort Riley, Kansas, on March 11, 1918. Within a short time, the flu quickly spread among both the military and civilian population in the nation, plus overseas in Europe.

Shannon said military personnel were hit especially hard by the epidemic, most of them living in crowded conditions in temporary tent camps in an era before a flu shot had been conceived.

He said of the 1,400 or so men from Freeborn County who served in the armed forces during World War I, at least 174 of these men became ill and later recovered from influenza, and in some cases, the added complication of pneumonia, according to a book issued in 1919 about the county’s veterans.

In a Nov. 11, 1994, Tribune column, Shannon said influenza brought havoc around the nation and world.

He quoted a reference book: “Fear of the disease and the lack of any information on its communicable nature caused general panic throughout America, canceling games, shows, movies and all other public gatherings. People wore surgical masks whenever on the street. Shops and businesses were closed down, both from absenteeism and from lack of customers.”

By Oct. 12, 1918, there were 100 confirmed cases and one known death from the disease in Albert Lea, Shannon said.

The Albert Lea City Council and board of health took emergency action to cope with the epidemic, ordering all theaters, churches, pool rooms and schools to immediately cease operations. Public gatherings of any kind were prohibited, and the only exceptions made were for the local stores and factories to remain open.

People were asked to stay home as much as possible to guard against spreading or contracting the disease.

Shannon wrote that within a few days, a 35-bed emergency hospital had been set up in the then-empty Cargill Science Hall of Albert Lea College by Naeve Hospital and local Red Cross volunteers. The college had ceased operations a few years earlier.

By the first part of November 1918, the emergency hospital had 25 seriously ill patients, including two of the nurses.

Dr. H.D. Burns, the city’s health officer, ended the influenza emergency on Nov. 18, 1918. There were still 16 patients in the temporary hospital on Abbott Street, but the flu cases locally were on the decline.

“From all indications, the embargo on almost all local social activities, plus the closing of the schools for just over a month helped to curtail the impact of the epidemic,” Shannon wrote.

Shannon said he was unable to determine how many area people died of influenza or the added complication of pneumonia during the 1918 epidemic; however, he said he did discover the loss of one family, Mr. and Mrs. Alfred Sorenson and their 7-year-old son, Martin, of North Albert Lea.

Another person to die from complications related to influenza while serving as a nurse with the American Red Cross was Effie Aldina Larsen.

Larsen was born in Clarks Grove on Sept. 21, 1895, and after graduating from the school of nursing at the University of Minnesota in September 1918, she became a nurse with the Red Cross.

On Oct. 16, 1918, she was assigned to the base hospital at Camp Dodge in Iowa, where she became ill with influenza, followed by pneumonia. She died on Dec. 14, 1918, and is buried in Clarks Grove Cemetery.

Spanish influenza made a return about a year later in January 1920, as the people of Albert Lea were getting excited about a new winter carnival that was planned.

The Jan. 22, 1920, issue of the Tribune had a headline stating “Businessmen behind winter carnival.” Also on the front page was a short news item saying there were 101 people sick with the flu in Albert Lea.

Shannon stated in a column he wrote on Nov. 18, 1994, that E.O. Vollum, chairman of the local board on health, on Jan. 23, 1920, prohibited all public meetings and gatherings and closed schools because of the rapidly spreading influenza. The action ended the carnival planning.

The City Council and local health care professionals held a special meeting Jan. 25, 1920, and by that time there were 150 confirmed cases, including eight teachers, along with 150 or more suspected cases in the city.

The leaders at that meeting decided to again set up an emergency hospital for the most seriously ill influenza patients. This time it would be at the Masonic Temple on North Broadway.

One of the patients in this new hospital died of influenza on Feb. 3, 1920, while the high point for patients being treated in the North Broadway building was 29 in early February.

By Feb. 11, 1920, the second round of the flu epidemic started to decline, and the temporary medical facility was closed.

Shannon said the city’s residents resumed their normal activities, the children went back to school and the weather warmed up enough to cancel out any ideas of reviving the winter carnival in 1920.

Advice for preventing influenza from 1918

Advice was given in the Freeborn County Standard Oct. 14, 1918, for preventing influenza from the school nurse, Miss Nelson. The newspaper advised people to clip the directions from the paper, and post them in a convenient place.

1. Stay in your own yard. Do not mingle with other children and keep away from the sick.

2. Keep out-of-doors and in the fresh air as much as possible.

3. Get plenty of sleep in the fresh air and eat good food, well cooked.

4. Wash hands before eating, using your own towel and washcloth.

5. Drink plenty of water, but from your own cup.

6. Garble the throat and spray out the nose, at meal and bedtime, with Dobell’s solution, or ordinary salt water (about a teaspoon to one-half glass of as warm water as possible).

7. Cough or sneeze into your handkerchiefs.

8. Be particularly careful about keeping the bowels in good condition — use a good laxative about every three or four days.