Bernard Peter Falksen, 100, formerly of Ellendale, passed away Monday, April 27, 2020, at Good Samaritan Society in Albert Lea. Private family graveside services are to be performed with a memorial service at a later date. The graveside service will be livestreamed on his obituary page at www.bonnerupfuneralservice.com at around 1 p.m. Friday. 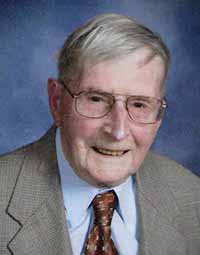 Bernard was born Dec. 12, 1919, in Albert Lea to Jens and Sena (Rasmussen) Falksen. He married Ruth (Petersen) Falksen on Nov. 21, 1943, and to this marriage was born three sons and three daughters. They resided in the Albert Lea, Glenville and Ellendale areas for their 61 years of marriage until her passing in July 2005.

His mother passed away when he was 13 years old. He and his father moved to Denmark when he was 14 years old, but Bernard returned to Albert Lea when he was 15 years old and lived with the John and Meta Nielsen family. He was grateful for their inclusion of him into their family for the rest of his life.

Bernard was a farmer at first but later found his true interest in carpentry while working with his brother Elmer. They built and remodeled many homes in the area. He was a skilled craftsman and has left many fine examples of his work to be cherished and enjoyed.

He was a member of Trinity Lutheran Church in Albert Lea and First Lutheran Church in Ellendale, where he was committed in his faith and served on various committees. His community service was widespread. He was on the board of directors at Hillcrest Cemetery and St. John’s Lutheran Community when they started the memory care unit that Ruth later became a resident of. He provided Ride Service for many years. He volunteered with Mission Builders on seven different church builds. He and Ruth were also foster parents to three boys and one girl.

Family and his faith were the most important parts of his life. He is survived by his children David (Marilyn) of Arlington, Virginia, Bruce (Lois) of Waupun, Wisconsin, Jerome (Irene) of St. Paul, Rita Kaye (Reed) Riskedahl of Marshalltown, Iowa, Eleanor (Rod) Koester of Mason City and Elizabeth (Merle) Brockhoff of Kansas City, Missouri; 12 grandchildren; 13 great-grandchildren and one great-great-grandchild. He is also survived by special foster sister, Eleanor (Nielsen) Schou of Albert Lea; brother-in-law, Edwin Petersen; sisters-in-law Lettie Anderson and Erna Berthelsen; and numerous nieces and nephews.

He is preceded in death by his wife, Ruth; his parents, brother Elmer; and several in-laws.

The family would like to thank Good Samaritan Society and Hospice staff for all the fine care they gave to their father. Condolences can be sent in care of the family to Bonnerup Funeral Services, 2210 E. Main St., Albert Lea, MN 56007.