Being a longtime member of First Lutheran Church in Albert Lea, a private family service and burial will be conducted immediately and once current restrictions are lifted, a celebration of life memorial service will be at a later date. Bonnerup Funeral Service is assisting the family www.BonnerupFuneralService.com. 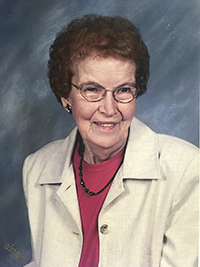 She was married to Alfred Loge on Sept. 23, 1939, to which four children were born: Avis, Arvis, James and Helen.

Burnett worked most of her life in the restaurant business, with many years at Canton Café and later in the cafeteria at Farmstead Foods. She met many friends and acquaintances through her working days and enjoyed talking and joking with many of them.

Her husband, Alfred, preceded her in death; as well as her parents and seven brothers and sisters.

Burnett was a fun-loving, full-of-life mother, grandmother, friend and neighbor, and will be greatly missed by all who knew her.

In lieu of flowers, consider a donation to any of the many fine programs and services provided by First Lutheran Church in Albert Lea.

Alton Quade, 84, of Albert Lea died Tuesday, April 7, 2020. Due to the social distancing restrictions as a result... read more