Cases steady for 3rd day in a row in Freeborn County 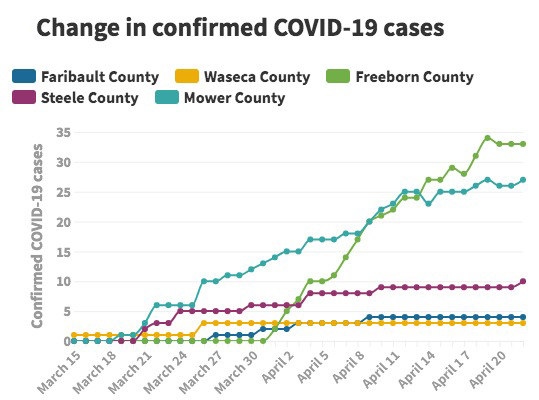 — Information from the Minnesota Department of Health/ Graphic created through Flourish

Confirmed COVID-19 cases remained unchanged in Freeborn County for the third day in a row, according to the Minnesota Department of Health.

The state department said the county has had 33 cases confirmed.

Cases increased by one in both Mower and Steele counties to 27 and 10, respectively, and were the same in Faribault County at four and Waseca County at three.

Total cases across the state increased to 2,721, an increase of 154 cases from the day prior.

Of that total, 1,317 no longer need to be in isolation, and 240 remained hospitalized, including 107 in intensive care.

Deaths increased to 179, an increase in 19 deaths — the single highest number of deaths reported on any given day since the numbers were recorded.

According to the department, the highest number of cases have been reported in Hennepin County with 1,073 cases, followed by Ramsey and Olmsted counties, with 219 and 204 respectively.

Cases in Nobles County, where there is an outbreak at a pork processing plant, have grown to 126.

The state department indicated 49,344 tests have been completed, including 10,508 through the department’s public health lab and 38,836 through external laboratories.