Providing a gesture of hope 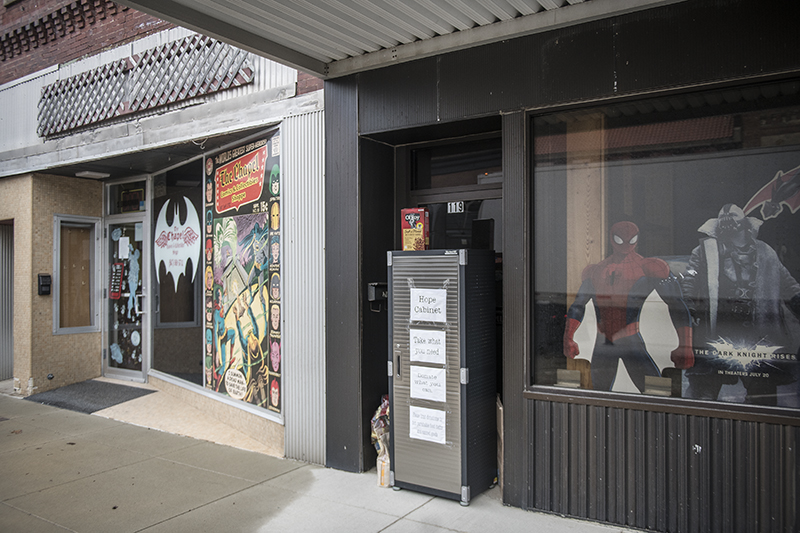 Gilbert Johnson, owner and operator of The Chapel Comics and Collectibles Shoppe, recently set up what he is calling a “hope cabinet” in front of his business on Broadway in downtown Albert Lea. - Colleen Harrison/Albert Lea Tribune

The damage COVID-19 has already caused has left a lot of families and individuals struggling in its wake. However, one local business owner is trying to offset some of those growing concerns by helping people get the supplies they need.

Gilbert Johnson, owner and operator of The Chapel Comics and Collectibles Shoppe, recently set up what he is calling a “hope cabinet” in front of his business on Broadway in Albert Lea. The cabinet is filled with a variety of canned goods, including fruits, vegetables and soups, pastas, bread and tortillas, among a range of other things. Anyone is welcome to come and take what they need from the cabinet. People can also donate to the cabinet by leaving products inside.

Johnson said he got the idea to open the hope cabinet by listening to the radio and news programs.

“After hearing about all the stuffing going on around the world, I realized that people are going to be out of work for quite a while,” Johnson said. “I’m out of work. They closed my business down until May 1 for sure. Just seeing what kinds of things are happening right now and knowing that there are people out there that need things that aren’t going to be able to get them.”

Johnson said he opened the cabinet a little over a week ago and has already seen numerous people take things from the cabinet, as well as many people coming to donate items. 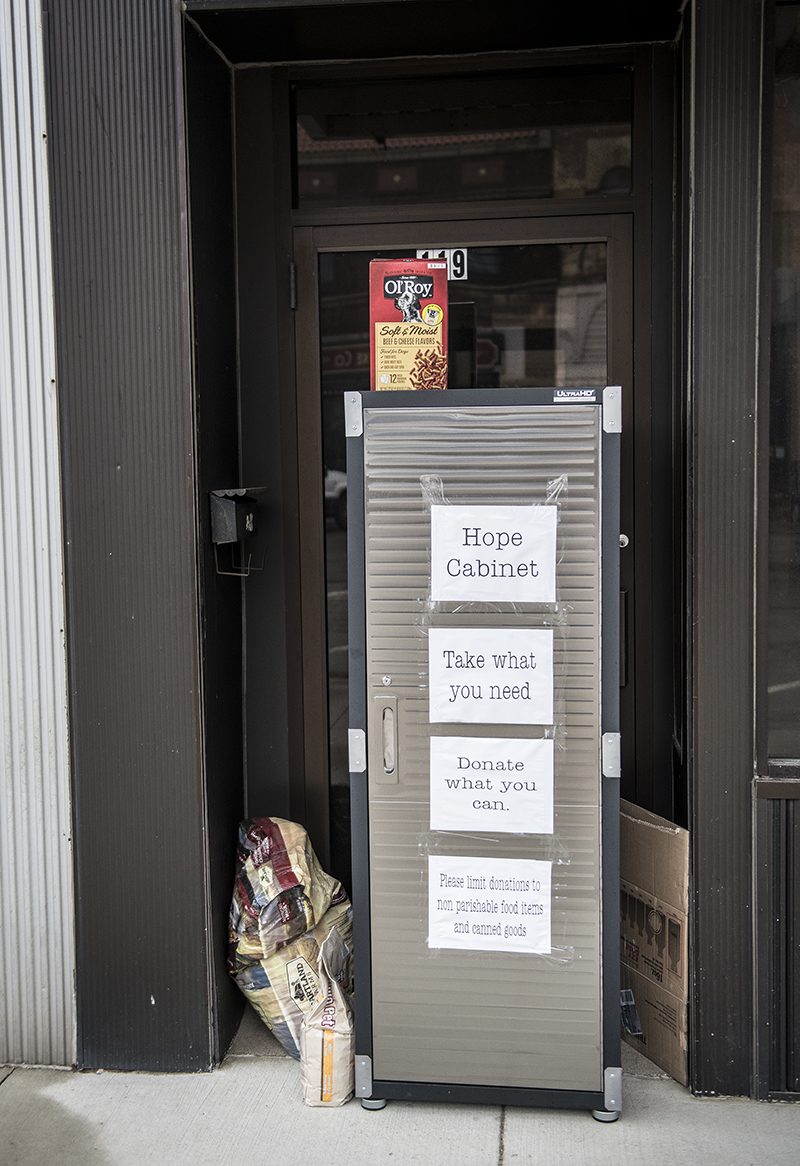 Anyone is welcome to come and take what they need from the cabinet. People can also donate to the cabinet by leaving products inside. – Colleen Harrison/Albert Lea Tribune

When he first started, Johnson said he was mostly stocking it himself, but as his Facebook post began to  grow, more and more people started coming to donate. Anyone wanting to donate is encouraged to bring nonperishable food items, canned goods, paper products, soaps, baby food or even pet food.

“There’s things that we don’t think about not having until we don’t have it,” Johnson said. “So anything that won’t spoil is the best. Just because I’m there everyday, I do have a few things like bread and tortillas in there, but I’m there everyday so I can check it.”

Due to the outpouring of donations, Johnson is working on setting up a second cabinet and possibly more in the future. The location of the second cabinet is yet to be determined, but Johnson was hoping to have it by the Kwik Trip on East Main Street. Johnson said he wasn’t sure how big he could expand in the future, but he hopes to set up as many locations as he can.

“It’s hard to say — it depends on how much the word gets out,” Johnson said. “The more the better. I wouldn’t mind going into other communities if I could, and putting up a cabinet — places like Hayward and Hollandale. I would be happy to reach it as far as I can reach it.”

People can go to “The Hope Cabinet” page on Facebook to donate and follow the page for more information on ways to donate or the location of future cabinet locations.