Rich Chalmers was born into this world in the midst of a blizzard and slipped out of it in the midst of a pandemic — despite, or perhaps because, he never really wanted anyone to make a fuss over him. But to his wife, Karen; his son, Chris (Jen), and their boys Sam, Dan, and Tim; his son, Michael, and his children Darby, Tate and Finn; his daughter, Ann (Bob), and their children Adelle, Mac and Camille; his son, James; and his daughter, Kate (Jeff), and their boys Teddy and Abe, he was their true north. 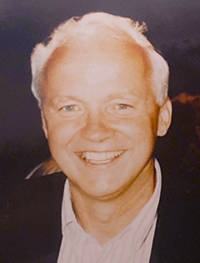 The fourth child of Gordon and Mary Lou, he was a devoted son and brother to Gordy, Bill, Beth, Dianne, Joanne, Louanne, Chuck, Mike and Mark. A graduate of Central Catholic High School in Marshall, St. John’s University in Collegeville and the University of St. Thomas in St. Paul, he was a standout athlete, leader and coach.

After assistant-coaching St. John’s football in their first national championship season, he went on to be the head football coach at Waseca Sacred Heart in Jordan, St. Cloud Cathedral and Red Wing high schools. It was in Red Wing where he and his high school sweetheart, Karen, whom he married in 1964, finally settled in 1970.

Rich had an innate understanding of teamwork and how to read the field of play, how to find a person’s strength and inspire them to use it. He took every team he met and made them better. As a social studies teacher and coach, he taught and inspired so many.

In 1975 he was recruited to work for Red Wing Shoe Co. and six years later, he was the vice president of human resources. There, as everywhere he went, he assembled the best and expected their best. He championed work and the worker. He walked the factory lines and knew all their names. When asked how he negotiates a fair labor contract, he answered, “The secret is: We need their talents as much as they need these jobs and I just make sure they know.” He retired early in 2000 as the executive vice president.

Rich was a president of Kiwanis and served on a handful of community and business boards. As a devoted servant at St. Joseph’s Church, he lived his Catholic faith and not just in church on Sunday. He was always ready to give a hand up to someone struggling. A second chance, a fresh start, a decent job; he was there.

He loved all sports, especially youth sports, and coached half the GenX kids in Red Wing in various little leagues. He thought there was nothing so important in developing a person’s character than to learn how to win and lose gracefully.

So when in 1989, at only 48 years old, he was diagnosed with an incurable degenerative disease, he began down the road teaching one more time the longest, hardest lesson of all. As he lost his fleet feet and steady voice and tireless energy, he did so with consummate grace, always leaning on these words he kept framed by his side: “Don’t ask for an easy life. Pray to be a strong person.” Through it all, he never lost his smile and remained a true believer, in Christ, in his fellow man, in his country, in his friends and in his family.

Rich never said five faint words when one true word would do, never got too excited about anything — much to Karen’s eternal frustration. But if you were lucky enough to be one of his steadfast friends from childhood or one of the cherished friends he collected along the way or one of the many he called family, then you knew his love was deep and constant and more precious than gold.

An adoring grandpa, Rich reserved a tender place in his heart for his grandchildren. Till the very end, to the best of his ability, he showed his love for them, like he did with his own children, simply by being present. His face in the crowd or along the sidelines, a nod, a hand on the shoulder, a hug, and always the fervent wish for them to have fun, to find their own paths, that he was immeasurably proud, so proud of them.

He loved a soaring solo as much as a soaring pass. Loved “factory” jokes that made Karen blush and laughed with his whole heart. He loved a good story, history and movies; loved family theater trips, especially at Christmas. He could fix almost anything, like Midwest farm boys somehow do. He’d never admit he was a true romantic, but two of his favorite movies were “Pretty Woman” and “The Sound of Music.”

Rich bled Johnnie red and often said that being a graduate of St. John’s University gave him every job he ever had. So, he’ll be laid to rest where part of his heart lay most of his life, near the still waters of Lake Sagatagan.

“‘Cut their grass,’ he urged his kids. ‘Clean this garage, fix that dock. Do the extra kindness for your neighbor, always, even when no one’s watching.’ Well, we were watching. We watched and learned and were humbled and inspired and so proud to be a part of his life,” his family said.

Rich Chalmers lived by a simple creed: “Leave every place better than you found it.” Go to your eternal rest, Rich, Dad, Papa, Grandpa, knowing you have.

Look for details on a wake and a Mass of Christian burial in the weeks or months ahead. When it is safe to gather, his family hopes people can join them to celebrate his life. Online condolences may be sent to the family at www.mahnfamilyfuneralhome.com.