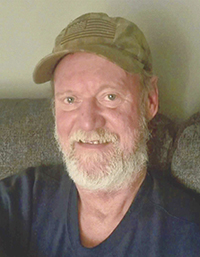 Due to state and federal guidance on gatherings due to the COVID-19 pandemic, the family will not have a public memorial at this time.

Rodney Laverne Thompson was born June 28, 1964, in Albert Lea to parents Gordon and Linda (Lawrence) Thompson. He was baptized and confirmed at Emmons Lutheran Church and graduated from Emmons High School in 1983.

In September 1986 Rod was married to Lori Baumann at Emmons Lutheran Church. The couple had three children: Kacy (who died at birth), Kayla and Codi. Their marriage later ended in divorce but that gave Rod more time to hunt and fish.

Rod had been employed at Universal Circuits/Dielectric Corp. in Lake Mills as the maintenance man for over 30 years. He always had a knack for fixing things, so even when Rod wasn’t at work, he enjoyed repairing projects on the family farm. His hobbies included hunting deer and pheasant, fishing, shooting his guns and being on the farm. And he was an accomplished practical joker who always seemed to have something up his sleeve.

Most recently, the greatest joy of Rod’s life had been the birth of his first grandchild. He was so proud to be Grandpa to beautiful little Cohen, who was born in February.

Rod was taken from his family too soon; the family that survives includes his children Kayla (Chris) Moon of Manly, Iowa, and Codi (Angel) Thompson of Forest City; grandson, Cohen Moon; his mother, Linda Peterson, of Emmons; two brothers, Lance (Carol) Thompson of Joice, Iowa, and Howard (Carrie) Peterson of Scarville; a sister, Pam (Russ) Heinzerling, of Ankeny, Iowa; his girlfriend of 20 years, Monice McBee, of Albert Lea; and his best friend, Todd Marpe, of Emmons. He is also survived by three nieces and a nephew, Lily Thompson, Halle Peterson, Austin Heinzerling and Marissa (Sawyer) Phillips; as well as other extended relatives and friends.

He was preceded in death by a daughter, Kacy; father, Gordon Thompson; and stepfather, Harlan Peterson.