Visiting their loved ones through the window 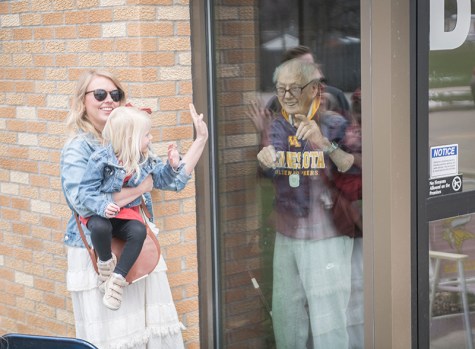 Andy Dyrdal waves to his granddaughter-in-law and his great-granddaughters during a visit Friday through a window at Thorne Crest Senior Living Community for his 97th birthday. - Colleen Harrison/Albert Lea Tribune 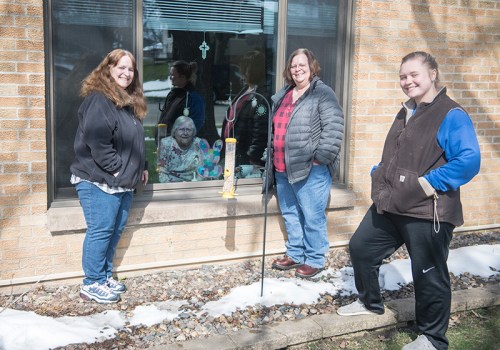 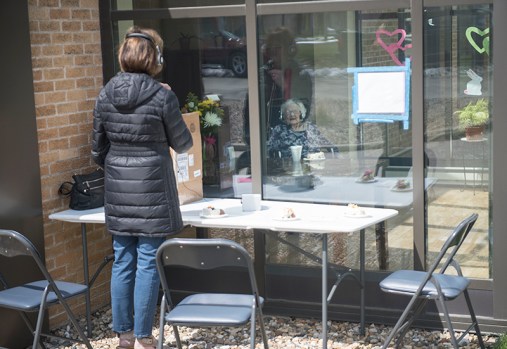 Donna Dahl visits with one of her daughters Friday during a visit through a window at Thorne Crest Senior Living Community for Dahl's 93rd birthday. - Colleen Harrison/Albert Lea Tribune 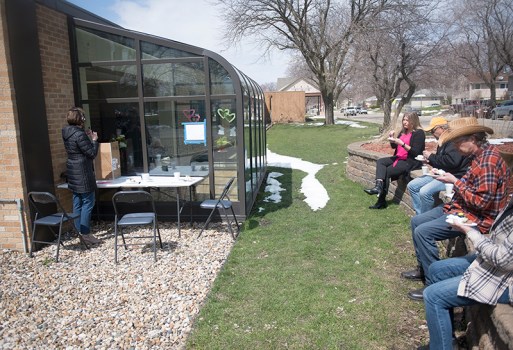 Dahl was able to have cake and ice cream Friday with her family for her birthday. - Colleen Harrison/Albert Lea Tribune 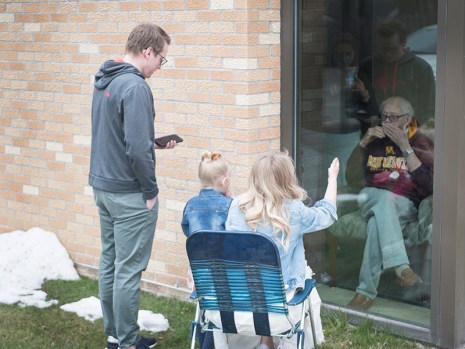 Andy Dyrdal blows kisses to his great-granddaughters during a visit Friday through a window at Thorne Crest Senior Living Community for his 97th birthday. - Colleen Harrison/Albert Lea Tribune 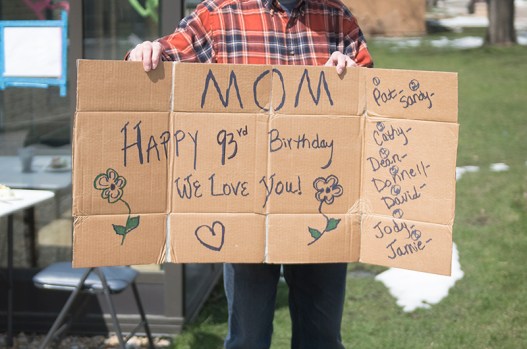 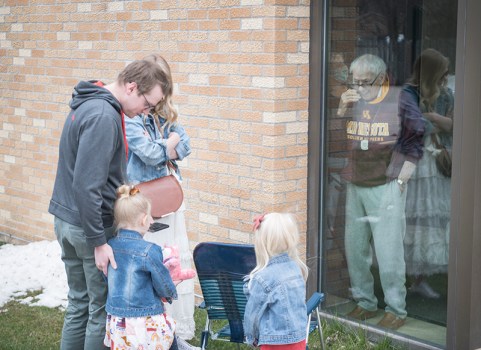 Andy Dyrdal visits with his grandson, Andrew, and his family during a visit Friday for his 97th birthday. - Colleen Harrison/Albert Lea Tribune 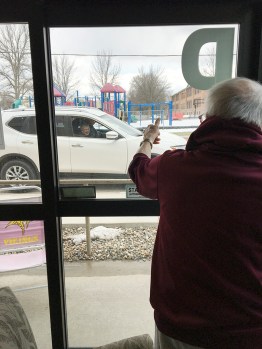 Andy Dyrdal gives a thumbs up through the window of Thorne Crest Senior Living Community to Al and Nancy Stoa as they drive by to wish him a happy birthday. - Provided 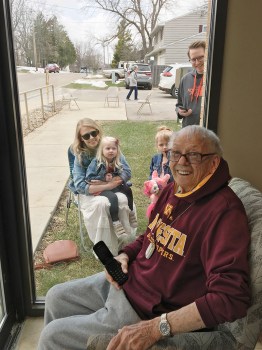 Andy Dyrdal smiles from inside as his grandson, Andrew, and wife, Rachel, and their two daughters look on from outside Thorne Crest Senior Living Community on Friday. - Provided

At least four or five days a week, Albert Lean Tom Dyrdal takes a lawn chair over to Thorne Crest Senior Living Community and sits down and talks with his dad.

His father, Andy Dyrdal, who turned 97 on Friday, sits inside the doors to the care center’s D entrance while the son sits on the outside, and the two talk to each other on the phone.

Unable to visit in-person because of the threat of COVID-19, the two men communicate as they normally would — just through a window.

“He really enjoys it,” Tom Dyrdal said. “He says it makes things feel somewhat normal, and he can hear me a lot better because he can see my mouth moving.”

Tom Dyrdal, who described his father as his “best friend,” said the two men typically would do a lot together, whether it’s going out to eat, getting together to watch a ball game or taking part in some other activity. Andy Dyrdal has been at Thorne Crest since the fall.

Though it has been difficult not being able to do these things in light of the safety precautions put in place, he said his dad’s positive attitude has made the situation a lot easier to deal with.

“He always says we take what comes in life,” Tom Dyrdal said. “And this is what we have now. We’re trying to make the best of it.”

The son said he also put a notice on his Facebook page, asking people to drive by and wave to his father on his big day.

Andy Dyrdal, who praised the care he has received at Thorne Crest, said it hasn’t been as hard as it could have been to be inside the facility during the pandemic because of technology — he has his own Facebook page — and because of the family’s visits.

Down the street at the intersection of Garfield Avenue and Hawthorne Street, Sandra Nelson and some of her family members were outside celebrating their mother’s 93rd birthday through the solarium at the corner of the care center.

Sandra Nelson said Thorne Crest Activities Director Marilyn Claassen helped set up a table outside the solarium and got an amplifier in place that they were able to use to communicate with her mother, Donna Dahl.

Nelson said her mother has lived in the facility for about four years, and before the COVID-19 guidelines were put in place at nursing homes, she would visit her at least three times a week, often for coffee.

As she was used to seeing her often, it has been a challenge not to be able to sit next to her and visit in person.

“We want to spend as much time with her as we can,” Nelson said.

She was grateful for the efforts the staff at the facility have made to help them still reach out to her.

‘There has to be a point’

Though families are grateful for all of the staff who are taking care of their loved ones, some say it has been a stressful time for them not being able to see their loved ones in person.

Sue Brighton said her mother, Bernice Beers, has lived at Thorne Crest for about a year and a half and is unable to speak after having a stroke.

“It’s easier when you’re sitting with her because you can read her expressions,” Brighton said. “The visual part is a lot of it for us.”

Before the nursing home restrictions were put in place, she said she would visit her at least four times a week. Now, she estimates she is going up and seeing her mom through the window about once a week.

She and other family members celebrated her mother’s 95th birthday April 4, singing happy birthday through the window and taking turns wishing her happy birthday on the phone.

“I understand the quarantine and the lockdown, but there has to be a point,” Brighton said. “We need to just get in there.”

She and her sister and a few other family members visited again Friday morning.

“She’s 95,” Brighton said. “She’s basically in good health, but you never know. So every day we’re not getting in to see her is a day they’re taking away from us. I think that’s for me probably the most stressful part of the situation.

“There’s just so much that you’re missing out on.”