Charles “Charlie” Spencer Bogue, 59, passed away peacefully at home Thursday, May 14, 2020, after a courageous battle with cancer. A celebration of life will be planned at a later date. 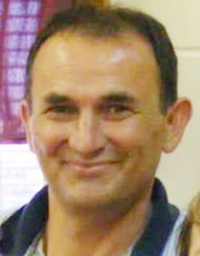 Charlie served in the Minnesota National Guard for 22 years, retiring as an armory sergeant.

He spent the majority of his life using his woodworking skills to remodel homes and businesses with his own company, No-Bull Construction. He was a hard working man and a very talented carpenter.

Charlie was a member of the Fraternity of Eagles and helped with the can drive for cancer every year.

He belonged to the Eagles’ traveling bowling league and Mercantile bowling league of Albert Lea, where he enjoyed bowling and laughing with his friends, son, Aaron, and brother, Al. Often his grandkids would attend and Charlie enjoyed buying the kids their favorite treats.

Charlie loved his brother and sisters. He helped bring the Bogue family together for pool parties and family reunions.

“One measure of a successful life is what we leave behind,” his family stated. His family is testament to his success, as is his high quality carpentry, where he showed his creative side.

He was a quiet man. They say still waters run deep. That was true of him. He felt deeply and loved his family deeply.

He will be deeply missed.

Charlie’s family would like to thank all Rochester Mayo Clinic doctors and Mayo Clinic Albert Lea Hospice for the love, prayers and support during his long fight with cancer.

His children would also like to send a warm heartfelt thank you to Al and Tammy Bogue for the continued care they gave Charlie throughout his courageous fight.

“Charlie will be missed by so many but the memories he made with all of us and all of you will keep him alive in spirit,” his family stated.