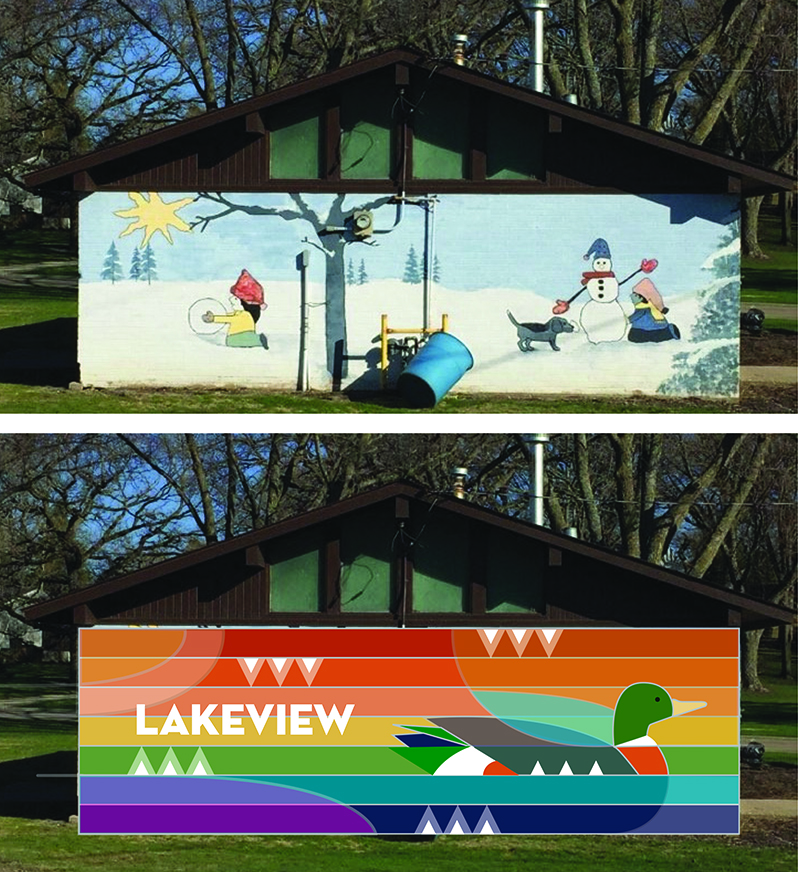 A rendering of the Lakeview warming house shows the current image on the side of the warming house, top, and the proposed image at bottom. Provided

Residents planning other murals as well

The mural at the Lakeview Park warming house will soon be getting a new look thanks to an effort by two residents who are seeking to make it a community project.

Holly Karsjens, executive director of the Albert Lea Convention and Visitors Bureau and the Albert Lea Main Street Program, said Tuesday she and Shane Koepke, pastor of Grace Lutheran Church, attended the Blandin Community Leadership Program last fall and are seeking to organize the painting of the north-facing wall of the warming house as part of an effort to bring public art to the community.

Karsjens said the hope is that people from the community can come in and paint the mural in a sort of “paint by numbers” design, which features a colorful geometric design with a duck and landscape, along with the name of the park. With social distancing guidelines in place, she said people could sign up for a specific time slot and color to paint. She anticipated the project to be completed by the end of July.

The goal is to do something similar to the other warming houses in Albert Lea as community projects as well under the Main Street program, Karsjens said, and other plans are being discussed about the installation of other public art.

She said plans are in place to contact the designer and painters of the former Lakeview mural to let them know about the project and to recognize them on social media and other means.

Third Ward Councilor Jason Howland said the project was recommended to the council by the Albert Lea Parks and Recreation Advisory Board.

The council on Tuesday voted to accept donation of labor and materials for the project.

• Adopted a five-year street reconstruction plan related to the Bridge Avenue project as required since the upcoming project with the county will be paid solely with taxes and not assessments. For this reason, the debt will be issued under the Street Reconstruction Authority.

The council resolution provided for the sale of street reconstruction plan bonds in an amount not to exceed $1.2 million. =

• Approved the sale of $4.885 million in general obligation bonds to provide financing for assessable public improvement projects taken by the city, including the Bridge Avenue project, the 2020 neighborhood and overlay project, the Clark Street project, and the Newton Avenue and College Street parking lot.

The term would be for 10 years.

The asking price for the property is $110,000, and profits from the sale would go toward the new fire station.

• Recognized Rick Ashling for 26 years of service as the wastewater treatment plant superintendent.

• Accepted the Certificate of Achievement for Excellence in Financial Reporting by the Government Finance Officers Association of the United States and Canada.

This is the highest form of recognition in the area of governmental accounting and financial reporting. The city has received the certificate for 36 consecutive years.

After renovations, the building will house the Peterson, Kolker, Haedt & Benda law firm and a real estate development and financing firm owned by former attorney Richard N. Davies and family.