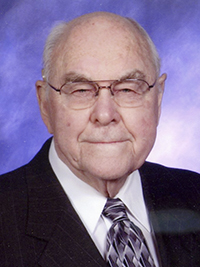 He was born on a small farm near Alden to Ida (Schneider) and William Breamer on March 2, 1925. When he was 4 years old, the family moved to another farm near Albert Lea because of hard times during the Depression. Don attended county school in District 124 through the eighth grade, and was confirmed in April 1939 at Concordia Lutheran Church of Albert Lea.

On Oct. 11, 1945, he married Virginia Bangert at Concordia Lutheran Church. Together, Don and Virginia farmed the Bangert family farm east of Alden and raised three children. From 1965 to 1987, Don also worked in the wood shop at Streater Industries. Since 1977 they resided on Southview Lane in Albert Lea, and in recent years Don lived at Luther Place condos, as well as at the Meadows and Woodlands on the Fountain Lake campus of St. John’s Lutheran Community.

Don enjoyed playing sports in his younger years. A favorite picture shows him and the Pickerel Lake 4-H softball team. Later, he lived the hard work of farming, raising a family and being a great father. He enjoyed watching and reading about the Twins, Vikings and all Gophers sports. Many hours were spent woodworking and building different items of furniture for his children and grandchildren. He was always very good about writing cards and letters to his relatives and friends.

Don will also be remembered for his good sense of humor, patient demeanor and contagious laugh. In his later years, he combined his humor with a unique brand of poetry. Among the works written to the delight of friends and family were his poems “The Joys of Kraut” and “Some Fractured Prose.”

He is preceded in death by his wife, Virginia, in 2011; his parents; brother, Irvin (Maureen) Breamer; sister, Irene (Ervin) Kuethe; and in-laws Albert and Hulda Bangert.

Don’s family thanks the staff of St John’s for many years of loving, personal care. Memorials in Don’s name may be made to Concordia Lutheran Church, St. John’s Lutheran Community or Mayo Hospice.

Don’s family will hold private services, which will be live streamed at  www.bonnerupfuneralservice.com at 12:30 p.m. Saturday. Following private services, the family will host a public drive-thru graveside visitation from 3:30 to 5:30 p.m. Saturday at Concordia Lutheran Cemetery, Pickerel Lake. Upon arrival, please stay in your vehicles and drive through the cemetery, where family will be there to greet you; all are invited.

Expressions of sympathy during this time may also be left on the condolences page available with the obituary on Bonnerup’s website.