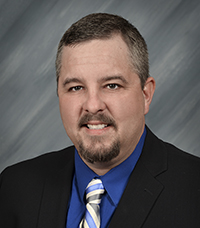 Howland, 46, said he has enjoyed his first four years as a city councilor and hopes the residents of the ward will agree that he has done a good job and re-elect him to the seat.

“I care about this community, and I’m very proud to represent the people of Albert Lea,” he said.

During his time thus far in office, he said he has enjoyed making decisions and policies to help Albert Lea be a better community. He takes his position as a representative of the 3rd Ward seriously and hopes he can be a voice for the residents of the ward. He said he also enjoys being a sounding board for people and helping them solve various problems.

He noted he thinks the city has a strong City Council and mayor.

“We don’t always agree, but I think there’s a mutual respect among all of us, and we’re focused on pushing Albert Lea forward in a positive way,” he said.

During his first term, he has been proud to be on the committee for the new Albert Lea fire station and said it has been gratifying to see that project come to fruition.

He is also proud of continuing the city’s zero percent operating tax levy increase for the four years he has been in office.

“That is a big accomplishment for the council and the city,” he said.

In the coming months, Howland said the city will be faced with the effects of the COVID-19 pandemic, and councilors will have to focus on how to move the city forward and provide as much aid as it can to the city’s citizens and especially small businesses, who are facing challenging times.

“Whatever we can do as a city to help, I think we’ll do that,” he said.

Part of that also involves making sure the city is mindful of taxpayer dollars.

Howland, who has served as an ex-officio member of the Albert Lea Parks and Recreation Board since he was elected, is also known for his involvement on the Albert Lea Community Theatre Board and for his role as coach of the Albert Lea Anglers youth fishing team. He was also a part of two committees for the Minnesota Governor’s Fishing Opener in 2019 in Albert Lea.

Howland is married to his wife, Teresa, and has lived in Albert Lea for 23 years.