Marlys J. Johnson (Doppelhammer), 82, passed peacefully from this life Sunday, May 17, 2020, in her residence at St. John’s Lutheran Community. She now rests from many years of health challenges due to multiple sclerosis. 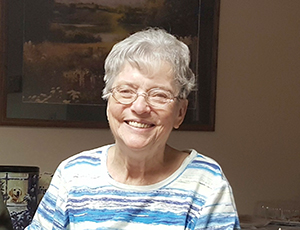 Marlys was born Dec. 14, 1937, to Esther and Arthur Doppelhammer and grew up in Conger. She graduated from Albert Lea High School in 1955 and married Jerome Johnson in 1956. They lived in Texas while he was in the Navy, then moved to California where they lived in various locations until settling in Northridge where they raised their son, Jeffrey. Marlys held several administrative positions prior to her retirement, after which she returned to Minnesota.

Marlys was gifted in the fine arts and was always to be seen fashionably dressed. She played the piano and organ, and sang in church choirs for many years. She was a talented painter, and when that became difficult because of her MS, she avidly pursued crocheting, knitting and needlepoint. She was also a constant reader and enjoyed traveling. Her talents, kindness and sense of humor will be missed.

Marlys is survived by her son and his wife, Jeffrey and Flora Johnson; her three brothers and their wives, Marlyn and Thelma Doppelhammer, Lowell and Diane Doppelhammer, and Robert Doppelhammer and Liz Holmberg; and many nieces and nephews.

A private interment will take place at a later date.