Our Lord God gave life to Andy (Maynard Andrew) Gudal on August 16, 1933, and He came for him at his home near Bricelyn, MN, on Saturday, May 23, 2020, at 9:45pm, giving him 86 years here. Andy had two heart attacks and a stroke in February and Congestive Heart Failure in March, spending 40 days hospitalized in TX. He and Shirley had gone there to spend a couple winter months at their son, Dave’s home, Andy enjoyed working in their Vineyard. Dave and Missy assisted tirelessly in helping Shirley and Andy. The Lord enabled them to return to their Bricelyn home March 20 where he spent his remaining days, cared for by family, mainly Robin and Greg, and Hospice of UHD. Andy’s desire was to be with his wife, Shirley, at home. 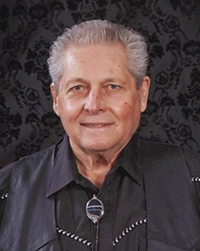 A drive-up funeral will be held Monday, June 1, 2020 at 10:30 AM at Crossroads Evangelical Free Church in Albert Lea, MN, with Pastor Jeff Phelps officiating. Attendees must arrive by 10:15 AM and can listen to the service in their cars. Burial will take place for immediate family at Bricelyn Lutheran Cemetery with military honors accorded by Bricelyn American Legion Post #165. Please see www.brussheitner.com to leave online condolences. Bruss-Heitner Funeral Home in Wells, MN, is in charge of arrangements. Andy enjoyed giving, seeing, and hearing of how the Lord was working at Prairie River Camp and at Youth For Christ, The Rock, Albert Lea. It was important to him that youth heard the message of salvation in our Lord Jesus Christ. In lieu of flowers, a gift to the Lord’s work, as He leads, would be a special blessing.

Andy was born to Maynard and Cora (Hamlin) Gudal in Minneapolis, MN. He attended school there and as a sophomore, he talked his father into moving to a farm near Bricelyn as he wanted to farm. He graduated from Bricelyn High School in 1951. He farmed one year and then entered military service in January of 1953. He served in Korea and was discharged in December of 1954, and then returned to farming. He loved to share how a close friend sent him a photo of Shirley Vogt from Blue Earth as he was leaving Korea. He told him to look after her and keep other guys away, and that’s exactly what he did. He found her and married her on September 15, 1956. The Lord gave them 63 plus years of marriage, each felt God had brought them together and their partner was the “right one”! Through the years they saw God answer so many prayers. In these elder years they would sometimes spend hours together in devotional time. They loved children, and were given four sons, whom Andy enjoyed and always had time for. Others also felt his care for them. It was special having foster children Allan & Michelle spend about four years with them. Andy had a strong work ethic that he passed on to each of his sons. Family vacation trips were a high priority and a great time. With a Norwegian heritage eating lutefisk every Christmas was a tradition. In his youth he had enjoyed Boy Scouts and later passed on the fun of canoeing and camping to scouts and family.

In past years Andy served on the Bricelyn Elevator Board of Directors and on the Bricelyn School Board Association. He was a member of Crossroads Ev. Free Church at Albert Lea and enjoyed going to the Small Group Bible Study and wanted to be at church each Sunday and be there early to enjoy coffee with others before worship. He also enjoyed afternoon coffee time with the guys at Bud’s Cafe. Other things that brought Andy joy were collecting and fixing farm toys, playing cribbage and croquet with family. He liked to wear his Korea Veteran cap wherever he went, it led to interesting conversations. He was a member of Bricelyn Legion Post #165 for 65 years.