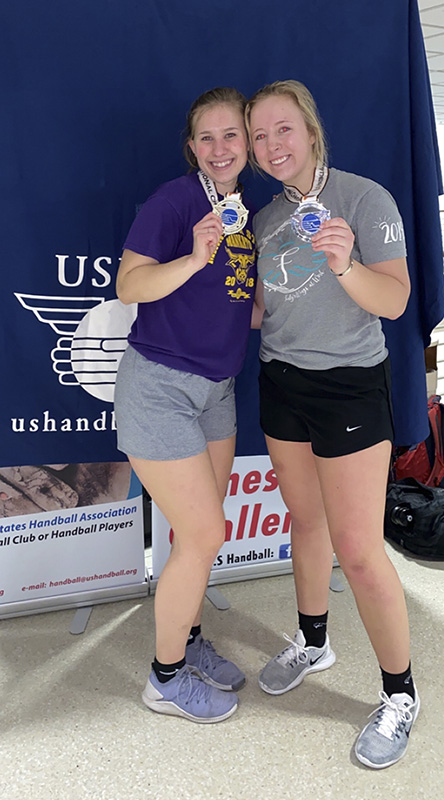 Alexis Anderson, right, stands with her teammate Molly Hlebichuk after taking second place in the women's doubles B division at the USHA National Collegiate Handball Championships at the University of Texas. Provided

For 2019 NRHEG graduate Alexis Anderson, playing handball started out as a way to fill a course requirement in college. Over the course of her freshman year, it progressed into a spot on the university’s team and eventually a runner-up finish in the national collegiate championships.

As a freshman at Minnesota State University-Mankato, Anderson needed to enroll in a class to fill a human performance goal area. In the fall semester, she enrolled in Introduction to Handball to fill the requirement.

According to Anderson, she was expecting to show up to class and play European handball, a team-based sport where teams attempt to throw a ball into a net. However, when she arrived at class the first day, she was surprised to learn it was actually American handball, in which players compete as individuals or on two-person teams in a game much like racquetball only without the rackets.

“I was very scared when I saw how individual the handball I was playing was going to be,” Anderson said. “It was also extremely intimidating that almost every single person in my class were boys. Before college, I had never played handball. I did not know it was a sport, I was completely clueless about what handball was.”

On the first day of class, Mike Wells, the university’s head handball coach, took notice of her play and pulled her aside. Anderson said Wells told her she had potential and wanted her to join the team. At first she said she wasn’t sure about the idea, but after a couple weeks, Wells asked her again and this time she agreed.

Anderson credited the persistence of Wells as the reason she agreed to join the team. She also said the idea of getting to travel and compete in different states was a draw for her.

For her first competition, Anderson traveled to the University of Illinois for the Illini Invitational. She took third place in the women’s singles small ball B division.

Anderson competed in a handful of other events after the opener and picked up a doubles consolation title at the Bear Bash at Missouri State and bronze division runner-up at the Milwaukee Classic.

It all led up to the USHA National Collegiate Handball Championships at the University of Texas in late February.

Anderson said everyone on the team got to go to the national tournament, but since it was only her freshman year she thought it was going to be a “take it all in” type of experience. Little did she know, she would be coming back with a medal.

On top of placing fourth overall in the women’s B1 division, Anderson partnered with teammate Molly Hlebichuk to finish as runners-up in the women’s doubles B division. Anderson said that finish was her favorite memory from the season.

Unlike high school, where Anderson was involved in sports year-round, she said practicing handball was more individualized. In high school, practices for each sport are held basically every school day, but Anderson said there was only one night a week when they held a team handball practice. The rest of the time it was up to the individual players when they would get in and practice.

After a successful first season, Anderson said she will definitely be back on the team next season. Some of her goals for the upcoming season are to get better at using her non-dominant hand, focusing on making her serves more accurate and powerful and working on her kill shots.

“I definitely plan on being on the team again this coming year,” Anderson said. “I am getting very antsy to get back to Mankato to start practicing and playing handball.”