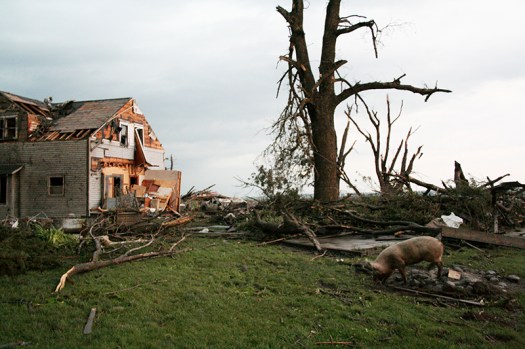 A hog roams the wreckage at a farm owned by Bob Hanson west of Armstrong. - Tim Engstrom/Albert Lea Tribune 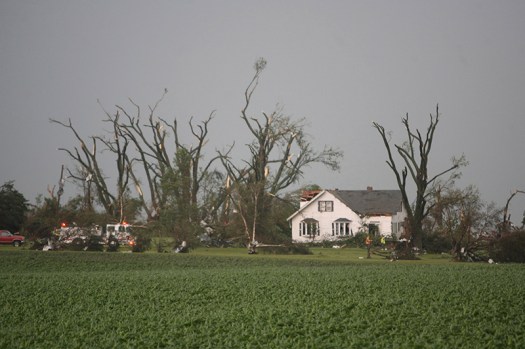 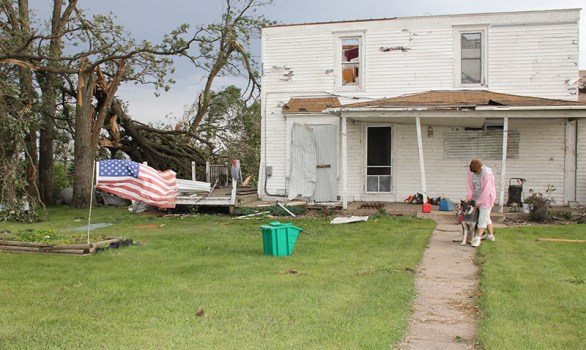 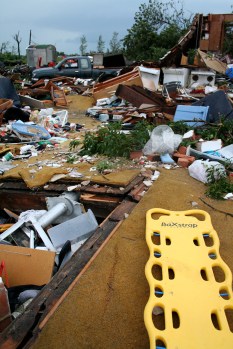 A stretcher rests on top of debris at the farmhouse of Kerry and Ada Graves after the June 17, 2010, tornado leveled their home. - Tim Engstrom/Albert Lea Tribune 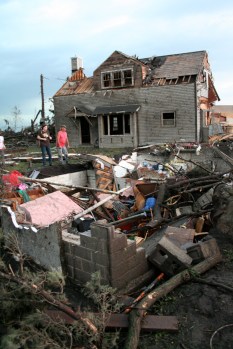 The home of Bob and Laural Hanson was picked up and moved about 50 feet from its foundation during the tornado that devastated the area June 17, 2010. - Tim Engstrom/Albert Lea Tribune 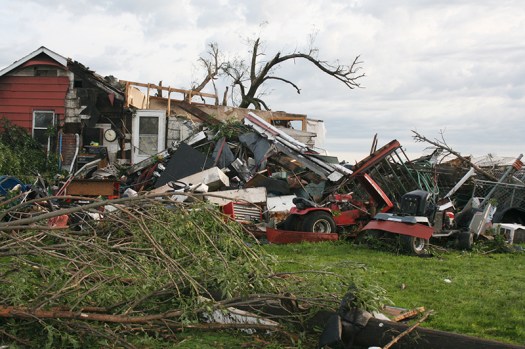 The home of Matt Luna in rural Hollandale as pictured the morning of June 18, 2010. - Sarah Stultz/Albert lea Tribune 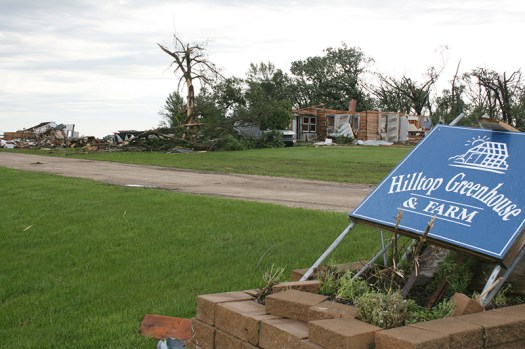 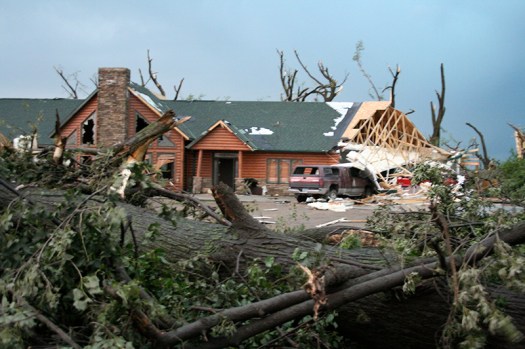 Part of the new home of John Perschbacher was destroyed and thrown on top of a pickup on the property. Many trees had also fallen over on the estate. - Tim Engstrom/Albert Lea Tribune 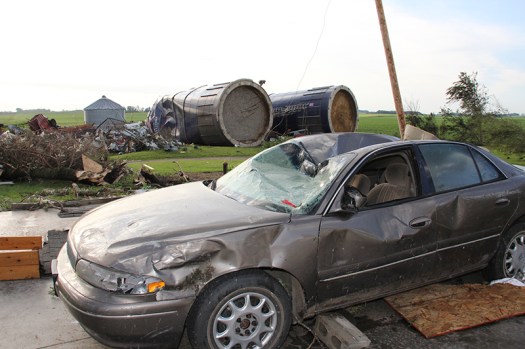 Two silos at Curtis and Mary Peterson's farm near Conger were detached from their cement bases and tipped over in the carnage of the 2010 tornado. - Scott Schmeltzer/Albert Lea Tribune 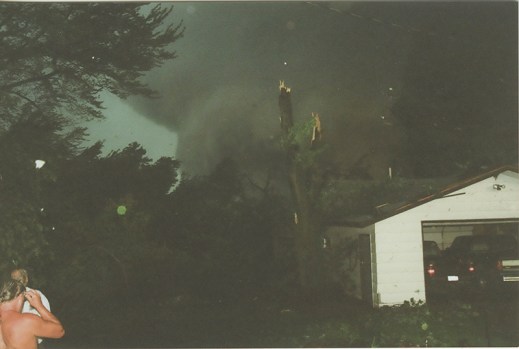 A view of the tornado near Armstrong at Charlie Schmidt's property. - Provided 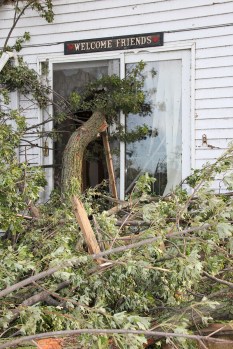 A large tree was downed near a sliding door at Curtis and Mary Peterson's farm near Conger. - Scott Schmeltzer/Albert Lea Tribune 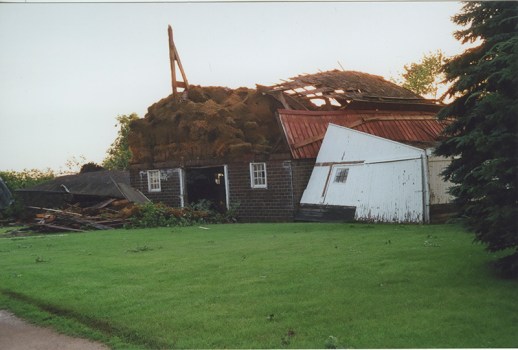 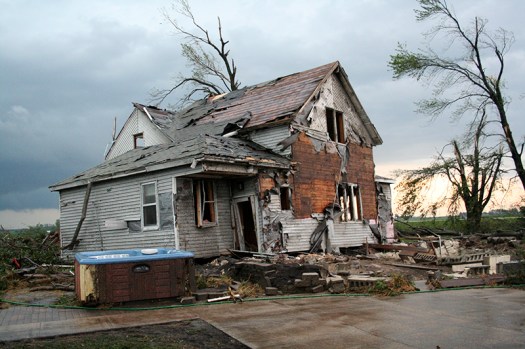 The home of Gordy and Kathy Toenges after the June 17, 2010, tornadoes. - Tim Engstrom/Albert Lea Tribune

Ten years after tornadoes ripped their way through Freeborn County, leaving behind trails of destruction, resident Lavonne Krueger still gets anxious when the sky gets dark.

“Anxiety flares the minute I hear something may be around,” said Krueger, who lives between Alden and Conger. “The darker it gets, the more anxious I am.”

Krueger has good reason, as she and her mother — who were living on 660th Avenue off of Freeborn County Road 46 — were two of hundreds of county residents who survived the tornadoes the night of June 17, 2010.

That day, three thunderstorm cells produced tornadoes that devastated farms and homes in Faribault, Freeborn and Steele counties, including an EF4 tornado that killed a woman near Armstrong. The National Weather Service marked it the day with the greatest single-day tornado total in Minnesota history.

According to Tribune archives, the tornadoes touched down over 20 times in the county that night, starting in the southeast and extending to the northeast, including the cities of Armstrong, Conger, Clarks Grove, Hollandale and Geneva, to name a few.

‘I thought we were going to die’

Krueger said that night there was a tornado warning, and looking back she initially remembers thinking how nice it looked outside.

“I kind of wondered, ‘Do I really need to go in the basement?’” she said.

Pushing aside her doubts, she heeded the warning and put herself to work cleaning cobwebs and doing some laundry to pass the time as she listened to KATE Radio for updates.

Eventually, her mother, Kathy Schoon, who also lived on the same farm but in the neighboring house, came over with her dog to the basement.

“I kept hearing the sheriff at that time talking about where the tornado was,” Krueger said. “I went upstairs, got my purse, and it looked absolutely horrid out. I’ve never seen that kind of black. It was the blackest black I’ve ever seen in my life.”

She said she doesn’t know why, but she shut the basement door behind her as she went back down the stairs, and then shortly after, she saw a tree fly by the basement window.

She and her mother crawled over by the washer and dryer — where they thought they could be shielded better — and then covered their heads and started praying.

“I thought we were going to die,” she said.

She said it seemed like no time at all, and the tornado had passed.

“The devastation was just unbelievable,” Krueger said. “I thought, ‘Our whole life, everything we’ve worked for, is gone.’”

Her house had slid off its foundation, and trees had fallen on top of it. Schoon’s house was also a total loss, along with a barn, a machine shed, grain bins and a few other sheds on the farm. A semi on their property was picked up and thrown.

She said some storm chasers who were nearby busted into the house to make sure they were OK. Though the basement was covered in tree limbs, insulation and shattered glass, they were not injured.

Krueger said her husband, Mike, is a trucker and was out of the area at the time.

She and her family rebuilt at the same site, though she noted they are still trying to recover all these years later.

They moved into their new home, outfit with a tornado shelter, in 2012 about a year and a half later, but they still don’t have a barn or shed built yet and they are still cleaning up trees.

In the aftermath, Krueger was diagnosed with post-traumatic stress disorder that is often triggered by the weather. She said her children call her often to help her be calm during weather events.

She thanked all of the firefighters, the first responders and the storm chasers who made sure they were OK that night.

“There’s many wonderful people out there,” she said.

‘I said we better run’

A few miles away from the Kruegers, off of Freeborn County Road 46 near Armstrong, Charlie Schmidt endured his third tornado.

The first, he said, happened when he was 12 or 13, and the second occurred when he was in his late 20s. But it was the final one, he said, that was “the worst one I’ve ever seen.”

Schmidt said he and his family were all out in the garden that afternoon, “putzing around” and listening to KATE Radio when they heard that spotters were chasing a tornado and that it was in the Conger and Mansfield area.

“That’s when I said we better get going,” he said.

They quickly walked down to look by their mailbox to get a better view, and that’s when they started seeing the tornado.

After making sure everyone else made it down to the basement,  he said he heard something going on outside and saw one of his dogs.

He started getting hit by tree branches and glass, and it was too late to get into the house. He said he held onto one of the trees, and they stayed under the evergreen trees on his property.

“That’s when I watched the top of my barn fly,” he said.

Though his house was not completely destroyed, some of the windows were damaged, along with his roof and siding. He lost 63 trees, and a wall was ripped off of his machine shed.

The next thing he remembers is his wife yelling for him and wondering if the tornado was going to come back before starting to take photos of it moving on.

He credits the trees around his property for protecting his home to the extent it did.

Directly behind his property, he said, was the property of Ron and Kathy Woodside, where the county’s single death was recorded.

‘All of our buildings were gone’

Lindsey Mickelson and her husband, Jeremiah, lived northwest of Clarks Grove when the tornadoes came through Freeborn County in 2010.

She said she had worked that day at Mayo Clinic Health System in Albert Lea and the weather was nasty.

Her husband was supposed to work overnights and she was worried about the anticipated weather. She said when the sirens went off, they went into the house, and she went around shutting the windows before taking the dog and cat to the basement.

A tornado ultimately went right over their house and took it down to the foundation.

“I remember saying, ‘There goes my roof,’” she said. “You could hear the roof be ripped apart. It happened so quick after that.”

She remembers calling her mom to tell her they were in the basement, that it was raining and that everything was gone.

“There was nothing left,” she said. “All of our buildings were gone.”

They were not injured.

They climbed up a pile of wood to get out of the basement, and neighbors were there almost immediately who had been watching the storm.

Mickelson said they kept their farm site thinking they would rebuild, but then they bought a house in Clarks Grove in September 2010 and sold their property in 2015.

“It was extremely hard for me at first to deal with any kind of bad weather, but I’ve gotten better,” she said.

The couple now has two children, and recently had another bout of bad weather in Clarks Grove with hail damage that they are in the process of getting repaired now.

She said they have a book with photos to show their children what happened, and in 2017, their in-laws’ hardware store was damaged by a smaller tornado that passed through Clarks Grove.

She reminded people to look over their homeowner’s insurance policies to review their coverage.