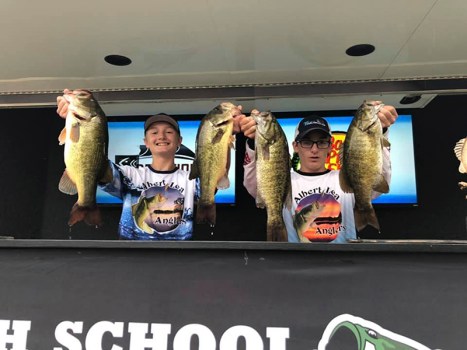 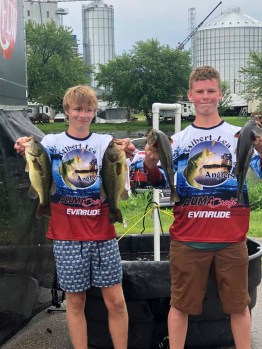 Thomas Lundell, left, and Griffin Thompson stand with their catches at the tournament where they qualified for the national championship. - Provided 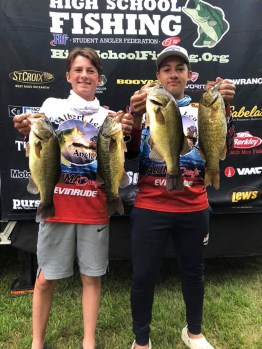 Ian Latham and Jaeger Larson qualified for the national championship tournament after finishing in fourth place at a tournament in August 2019. - Provided

Three teams of two, Griffin Thompson and Thomas Lundell, Will Utpadel and Caden Stevens, and Ian Latham and Jaeger Larson, all earned their spots in the national championship by qualifying at various tournaments last summer.

Jason Howland, coach of the Albert Lea Anglers and one of the adult captains who will be accompanying one of the teams in the boat, said he is excited for the anglers to get an opportunity in the tournament.

“This is the first time that I know of that it’s been here in our backyard,” Howland said. “Typically the tournament is down south. I think last year it was at Pickwick Lake in Alabama — it’s been there several years. It’s really a great opportunity for our kids to compete on a national level against some of the best young anglers in the country right here in our backyard.”

“My goal for the tournament is to catch a limit every day,” Utpadel said. “Also, I would love to make it to Saturday since Friday is cut day and where most people will be done fishing for the week. I am excited for many reasons but most of all to get out and go fishing. I’m also excited to be in another big tournament over on the Mississippi River, where we did so well last year.”

The teams will fish for both largemouth and smallmouth bass. All teams will fish on both Wednesday and Thursday, looking to make the cut into the next rounds. After fishing on Thursday, all teams’ top three fish will be weighed and totaled. Based on the weights, the top two teams from each state advance into the semifinals on Friday. The top 10 teams that also qualified for the national championship will move into Friday’s finals. All teams that did not advance into either the world championship semifinals or the national championship finals enter the second chance round and will fish again on Friday.

The weights are all zeroed again Saturday morning, and the 31 teams still in the tournament compete for the world champions title.

According to the Student Angler Foundation website, nearly $3 million in scholarships and prizes are up for grabs, including multiple scholarships, laptops, gift cards, TVs and other electronics, rods, reels, tackle, props, trolling motors and more.

Stevens said his goal is just to have fun, while still hoping to place high.

Howland said he expects about 300 teams in total to be at the tournament. Larson said he is excited to be a part of such a big event.

“I am looking forward to hanging out with the team for a week and fishing for a couple days in the tournament,” Larson said. “With about 300 boats involved it’s a pretty big tournament. I’m just trying to have fun.”

Practice begins on Sunday and continues through Tuesday, allowing teams to get a feel for the body of water and the spots they want to fish. Howland, along with Tony Stevens and Justin Bolinger, will be the in-boat captains with the teams.

“My goals for the tournament are first off to come out of practice with confidence in our plan and second to be able to maximize on three big bites every day, as this is a tournament with a three-fish limit,” Latham said. “I’m definitely ready to get back up on the stage. I love the energy, and of course it’s going to be fun getting away for a week and stay with all the guys.”

The boats will be outfitted with cameras and filmed for television at a later date on the Pursuit Channel. The weigh-ins will be livestreamed on the Student Angler Federation – High School Fishing Facebook page as well as highschoolfishing.org.