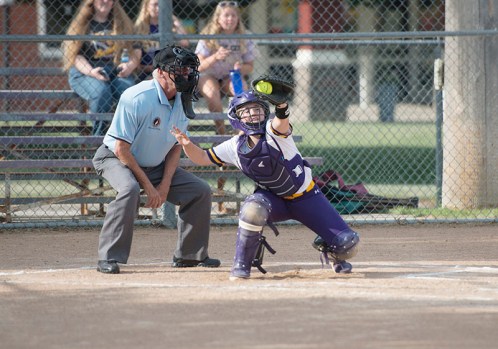 Lake Mills freshman Maddie Edwards catches a high pitch Monday night in the first game of the season. Edwards had a double and an RBI in the 17-15 win over West Hancock. - Tyler Julson/Albert Lea Tribune 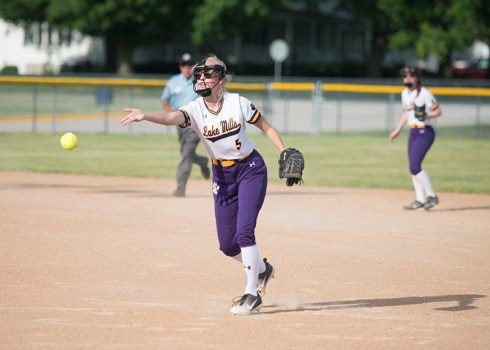 Sophomore Leah Moen tosses the ball from second base for the out Monday night against West Hancock. Moen came in for relief at pitcher in the second inning and recorded five strikeouts and seven walks. - Tyler Julson/Albert Lea Tribune 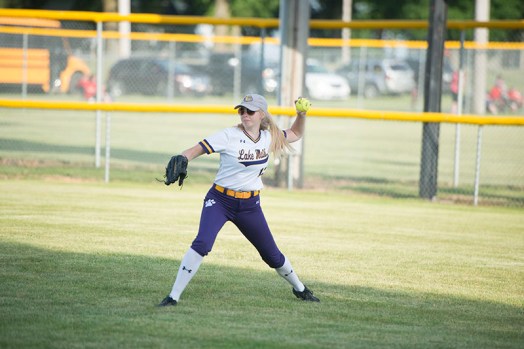 After a game that lasted over two hours and 30 minutes and saw a combined 32 runs, the Lake Mills softball team came out on top of a narrow battle with West Hancock.

After trailing by as many as five runs in the fourth inning, the Bulldogs battled back to beat the Eagles, 17-15.

It was a roller coaster of a game as the Eagles got out to a 8-4 lead after the second inning, but a five-run third inning and a six-run fourth inning from the Bulldogs gave them a one-run lead heading into the fifth.

After holding West Hancock scoreless in the top of the fifth inning, Lake Mills tacked on an additional run after a wild pitch in the bottom half of the inning.

The Bulldogs got a one-two-three inning from their defense in the top of the sixth and again added a run after a wild pitch in the bottom of the inning.

In the seventh and final inning, the Eagles notched one more run, but it was not enough to extend the game giving the Bulldogs their first win of the season.

Eighth grader Dottie Byers started the game in the circle for the Bulldogs. She recorded two strikeouts and six walks. Byers was relieved in the second inning by sophomore Leah Moen, who recorded five strikeouts and seven walks while also picking up the win.

At the plate, Lake Mills was led by senior Hope Levine with three hits. Byers recorded two and senior Jessa Gasteiger, sophomore Brooke Bergo, and freshmen Maddie Edwards and Natalie Brandenburg each had one hit. Edward’s hit was a double, the Bulldog’s lone extra-base hit of the game.

Gasteiger led the team with three RBIs while Brandenburg, Edwards, Moen and Levine each had one.

The Bulldogs scored 17 runs on nine hits, while the Eagles scored 15 runs on seven hits.

Lake Mills moves to 1-0 on the season and will be back in action Friday night when the Golden Bears of Bishop Garrigan roll into town.