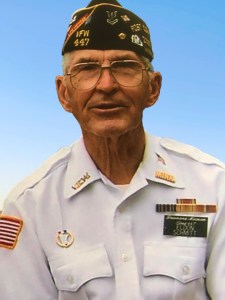 Eldon was born August 14, 1925 to Hannah and William Schmitt on the family farm near Twin Lakes, MN. He was the fifth of eight children.

After Eldon’s retirement from his profession as a bookkeeper and accountant, he faithfully served local veterans as a life member of the VFW, serving as Post Commander for a number of years and he was a 45 year member of the American Legion. One of Eldon’s true passions was serving on the Military Honor Guard which he led for many years as well. He commented that one of his greatest privileges was handing the flag to the family of the fallen brother in arms and sharing the Nation’s gratitude for their service.

He is remembered for his love of Christ, being a loving father and husband, positive attitude, unwavering patriotism, and kindness to everyone he met. A full obituary and summary of Eldon’s life was published in the Albert Lea Tribune in late February 2020.

We will join together on June 20th at Bayview Funeral Home to celebrate Eldon’s life and lay him to rest with the Military Honors he so loved. Seating is limited to 125 people and social distancing and protective face masks will be required. A visitation will be at 1:00pm, Memorial Service at 2:00pm with an interment and military honors to be held immediately following at Shady Oaks Cemetery. The public is welcome to join the family in celebrating Eldon’s amazing life.