‘It makes the world of a difference’ 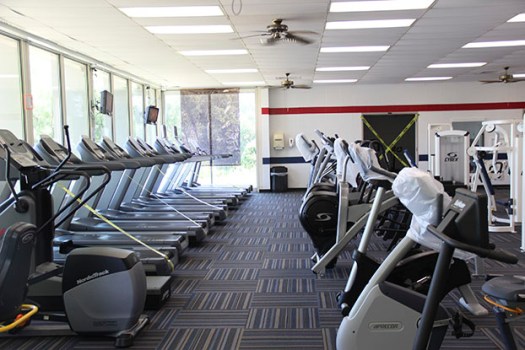 Machines are roped off at the Albert Lea Family Y to allow for suggested social distancing while exercising. Sarah Stultz/Albert Lea Tribune 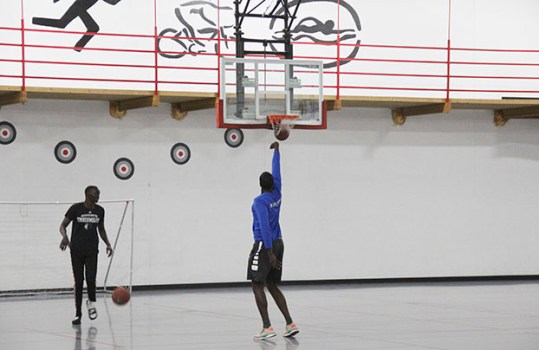 A few people play basketball in the gym at the Albert Lea Family Y on Wednesday. Sarah Stultz/Albert Lea Tribune 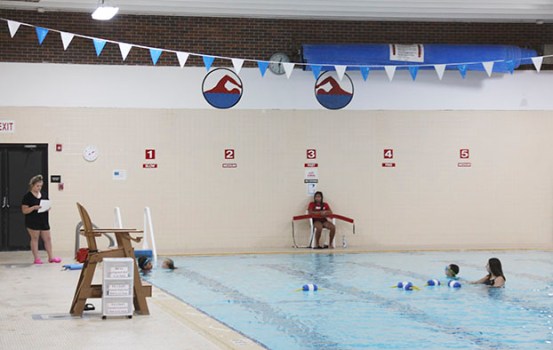 The Albert Lea Family Y's pool is open at 50% capacity and will be offering swimming lessons this summer. Sarah Stultz/Albert Lea Tribune

Albert Lea gyms are reopened with new guidelines in place

Though things may look a little different than in the past, gyms in Albert Lea have reopened after almost three months closed because of the COVID-19 pandemic.

The Albert Lea Family Y opened on Monday and for the immediate future will be open from 6 a.m. to 6 p.m. Mondays through Fridays.

Albert Lea Family Y Executive Director Dennis Dieser said when people walk into the facility, they should come in with a mask on and sanitize their hands. They will be asked a series of health-related screening questions before being allowed further into the facility. Masks are required by staff and patrons in all of the common areas but can be removed when exercising.

People using exercise equipment will be given a spray bottle and towel to clean off machines they use, and staff are wiping down high-touch places regularly throughout the day. Some machines are blocked off to allow for proper social distancing.

The pool is being used up to 50% capacity and is open for families by appointment and is available for lap swimming. Dieser said the organization will be conducting swim lessons and is working with The Children’s Center for their students to be in classes, as well.

“We have so much water in the Albert Lea area, we need to make sure those kids are protected,” he said.

The organization is waiting on the state for approval of youth summer programming.

He said the walking track is also open, but the racquetball courts have not yet been opened. Fitness classes will be able to run in the aerobic and spinning rooms with up to nine participants at a time with one instructor for each class.

He said the guidelines are put in place at the facility based on recommendations from the Centers for Disease Control and Prevention, the Minnesota Department of Health, the Freeborn County Public Health Department, Y USA and their insurance company.

“Safety is so important,” Dieser said.

He said the Y continues to run its school-aged child care in the building and has moved the check-in for parents for that program to the space in-between the two sets of doors at the front of the building.

Even though there are many changes, he said so far things have gone well. He credits his staff for their hard work in being prepared.

Amid all the changes, he said staff are working on planning some special events and have been collecting supplies to take up to other YMCAs in the Twin Cities for people who no longer have access to groceries or supplies, following the riots after the death of George Floyd last month.

“We’ve pivoted a little bit, but we’re still doing a lot of the social responsibility and youth development — and working on healthy living,” he said.

‘It makes the world of a difference’

Joe Tscholl of Albert Lea’s SNAP Fitness said his facility reopened June 10 and has implemented many of the same safety procedures. It can operate at 25% capacity and is encouraging masks or facial coverings for patrons.

There is hand sanitizer for people to utilize when entering and exiting the facility, and people are asked to wipe down equipment before and after use.

He said all equipment has been spread out so people can be six feet away from each other, and there are signs on the floor to remind people of social distancing guidelines.

While summer is typically a slower time for the gym because people want to get outside more, he said they have been seeing some of their “regulars” come back, as well as some new people who want to get healthy, both physically and mentally.

“I always tell my clients when I’m training, it’s not only just physical but mental as well to get your body active and your heart and everything else with that,” Tscholl said. “It makes the world of a difference.”

TMJ Elite Fitness, a training facility in the lower level of the building, reopened at the same time, and Tscholl said the youth summer hockey dry land classes there are up and running.

“We’re doing the best of our ability to get kids and adults back into the swing of things — easing their body and themselves so they’re not super sore for the next three or four days,” he said, noting that many weren’t exercising quite the same in the height of the COVID-19 restrictions.

He said the youth are excited to be able to come in and start working out again and to see their friends that they haven’t seen for a few months.

“We want to make it that you’re learning something, but also that social aspect of seeing your friends and your teammates and bonding,” he said.

The training center has six different groups coming in for classes, ranging in ages from 7 to 18.