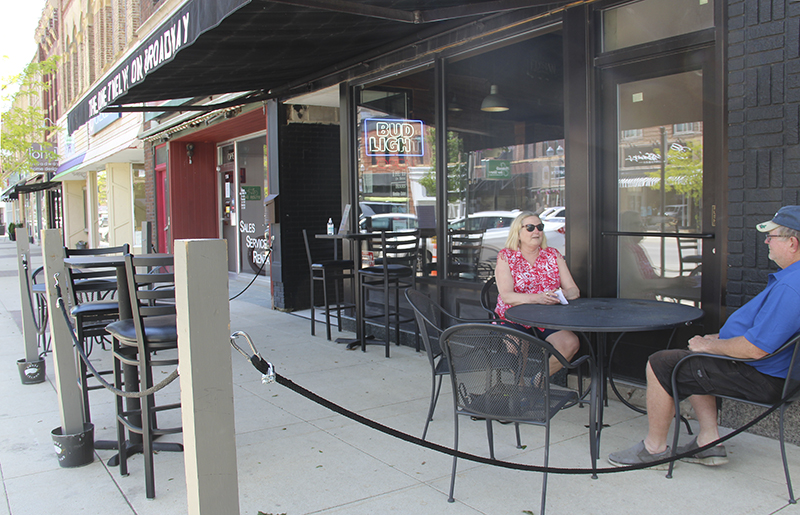 The 112 on Broadway and other restaurants in Minnesota were allowed to reopen for outdoor seating Monday under loosened restrictions. The business plans to expand its outdoor seating into the street during the evening hours starting Wednesday to accommodate more people and has come to an agreement with the city to allow them to do so. Sarah Stultz/Albert Lea Tribune

Several Albert Lea restaurants are reopening with outdoor seating this week with the loosening of state restrictions in place because of COVID-19.

Brent Erickson, co-owner of The 112 on Broadway, said his business reopened for customers outdoors with its normal patio setup on Monday that allows four tables and on Wednesday planned to expand seating into the street on Broadway to allow for more.

Erickson has been working with Albert Lea City Clerk Daphney Maras about ways to expand their outdoor seating capability and said the city agreed to block off the street daily from 5 to 10 p.m. in the area in front of the business. Broadway will be blocked to motorists at the Clark Street intersection going south for those hours, though people can enter the block from William Street on the south end of the block.

“We’re excited to get back to the dining side, but we ultimately would like to open our inside dining,” Erickson said.

He thanked the city, who he said has been great to allow the business to block off the street, and thanked the community for its support since his restaurant and others were ordered to close their doors in March.

“We’ve been hanging in there. …” Erickson said. “We had to adapt quickly and learn the delivery process, which we didn’t do before this, but we’re looking forward to opening in some capacity.”

Raul Campos of The Taco King, which is two doors down from The 112 on Broadway, said his business also planned to take advantage of the evening street closure for the portion of Broadway for outdoor dining, though it is not typically open in the evening at that location.

“We have to try everything to survive,” Campos said.

He said he planned to have six tables and see how that worked first.

The business’s second location on Blake Avenue opened its drive-thru window in March after the governor ordered restaurants to close their doors, and he said that has been going well. The drive-thru had always been there, but they had never used it because they were always busy in the front of the store.

“I hope we do well, and hopefully the people will still support everyone to get it going to the next step,” Campos said. “It’s always good to see the first step.”

Jason Hoiseth, co-owner of Bleachers Bar & Grill on South Broadway, said he and co-owner James Hagen had not planned to reopen for outdoor dining but ultimately decided to give it a try.

“We’re setting it up like a patio party,” Hoiseth said. “We have picnic tables that will be set up, social-distanced apart.”

The business tried to reach out to people through its Facebook page to see if it could borrow picnic tables from people in the community. It had a goal to get eight tables so it could stay within the governor’s 50-people limit.

The tables, which are set up in the open driveway space to the north of the building, are limited to groups of four, or six people in a family, and they plan to serve drinks and pizza to start. If things go well, then they will broaden their menu.

“We’re excited,” he said. “We’re hoping it works out great and people will come out.”

They have Bluetooth speakers for music and plan on being open each day until dusk so they are not a nuisance to nearby residents.

He said the welcome he and Hagen received when the business opened in September is what has kept them going through the closure.

“We really thank everybody for supporting us,” Hoiseth said.

Maras said she has been inundated with restaurant owners and mobile food vendors with questions, who are working hard to reopen their businesses as much as they can.

“I couldn’t be more proud of how the businesses are handling this,” she said. “I anticipate seeing more moving forward with that as we all work together.”

She said food trucks are out and about as much as they can be. The city previously had identified several locations on city property where they could sit and sell their food, and the city recently added a spot on East Main Street next to the former Domino’s location to that list.

“We are trying to work with them as much as we can, and we’re trying to come up with some ideas and some ways that we can help them try to recover some of the revenue that they have lost due to all of the canceled events,” Maras said. “We’ve been very busy trying to get people organized. If there’s anyone we missed, we really encourage them to reach out to us.”

As she talks with each of the business owners, she is also speaking with them about the new forgivable loan program implemented in collaboration between the city, Freeborn County and Albert Lea Economic Development Agency for small businesses hurt by COVID-19, with a priority for those that were not eligible for state or federal funding through other programs.

People can contact ALEDA for more about that program.