Age 72, of Edina, MN passed away Friday, June 5, 2020 at M Health Fairview East Bank in Minneapolis after a long roller coaster of health issues, leaving behind her broken body and beginning her blissful eternity in God’s glory. 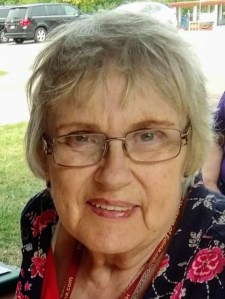 Jackie was born in 1947 to Morell Hagmann and Virginia Beighley in Albert Lea, MN. At age 5 she was adopted by her “Dad,” Earl Schultz. She grew up and attended school in Albert Lea. After graduating she moved to Minneapolis and lived in the Girls Club where she met her first love, Jerry J. Hill, who soon after died in Vietnam. She later married and moved to Grand Rapids to raise her family. Jackie started a career as a Tupperware Consultant and sold it for more than 20 years. When her kids were grown, she went back to school for her Associates Degree from Itasca Community College and worked as a medical secretary and medical record proof reader for several years. She moved back to the Twin Cities in 2004, soon after her first grandchildren were born.

While living in Grand Rapids, Jackie attended Grace Bible Chapel and almost always sat in the front row. She rarely missed a Sunday and always brought a carload of kids to AWANA on Wednesday nights. She was a sweet, sensitive, kind, loving, and caring woman. She would do anything for anyone. She was always known for her wit and sense of humor. She was a woman of God who raised three kids with servant hearts and compassion for others. She never drank a cup of coffee but would make a pot for you. She never forgot a face and could remember everyone’s phone number and birthday. She gave the best hugs. She loved to take pictures but hated getting her picture taken. She loved her Tupperware, Hershey bars, crocheting potholders and untangling yarn, watching the Minnesota Twins, doing puzzles, playing the license plate game and spending quality time with her loved ones, especially her kids and grandbabies.

Jackie is preceded in death by her parents. She is survived by her children; Doug (Ginny) Ruzicka, Todd Ruzicka, Bobbi (JT) Maddox; her six grandchildren; her two cats; Brooklyn and Jersey; and many friends and caregivers at The Heritage of Edina.

A memorial and celebration of life service will be held on Sunday, June 14 at 4:00 PM at Bethesda Church in Prior Lake MN. She will be buried at Hillcrest Cemetery in Albert Lea, MN.