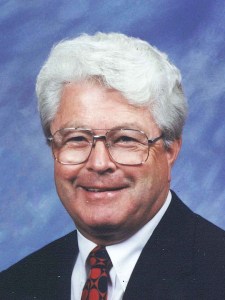 Mike was born April 29, 1936 in Albert Lea, Minnesota, the oldest child of Leonard and Fern (Booth) Jordan. He graduated from Albert Lea High School in 1954 and served in the US Army from 1954 to 1956 during the end of the Korean conflict.

Mike married his high school sweetheart, Susan Marie Nelson, on October 19, 1957 in Albert Lea, Minnesota. They were blessed with a 61-year marriage and were best friends who enjoyed antiquing, gardening, traveling, and spending time with their family and many friends.

Mike began his college studies at Kansas University and graduated from Mankato State University. After college, he started his teaching career at Pipestone, MN and taught there for two years before moving to Austin in 1962 to teach history and social studies at Austin High School. While still teaching, Mike entered graduate school and earned two Master’s Degrees in history and counseling. In 1968, Mike became a high school counselor, a position he maintained until he retired from the Austin High School in 1994. Mike also enjoyed coaching junior high basketball, instructing driver’s education, and working with youth at the YMCA. He had a positive influence on many young people’s lives. After retirement, Mike substituted at Austin High School and Riverland Community College.

Additionally, Mike and Sue started a business as co-owners of the Carriage House Gifts and Collectibles which they enjoyed for many years.

Mike and Sue were active members of Our Savior’s Lutheran Church for 58 years. He served as a Deacon, Church Council member, and on the Shepherd Committee. Other involvements include being a member of the Austin Chamber of Commerce, Jaycees, Retired Educators, Elks, American Legion and Sons of Norway. Mike was a leader in the Austin AFS international student exchange program. He served on the Board of Directors for Security Bank. During retirement he volunteered with the Austin Medical Center/Mayo Health Systems Hospital Auxiliary. He was an active member of the Austin Area Cancer Support Group as he was one of the longest cancer survivors in Mower County.

Mike was a humble, kind, and friendly man with an incredibly optimistic spirit. His daughters most admired his devotion and dedication to his family. He is survived by his daughters, Catherine Jordan of Edina, Karen (Joel) Christopherson of Plymouth, and Carol (Paul) Ousman of Excelsior; four grandchildren, Katie, Kelsey and John Christopherson (fiancé Sarah Welter), and John Ousman; sister, Ruth (Jim) Lair and nephews. He was preceded in death by his beloved wife Sue on August 24, 2019, and his parents and brother Jim.

Visitation will be held on Thursday, June 25th from 3:00 to 6:00 p.m. at Clasen-Jordan Mortuary. Interment with military honors and prayers committal will follow at 7:00 p.m. at Graceland Cemetery in Albert Lea. If interested in a memorial, please give to the American Cancer Society, American Stroke Association, The Hormel Institute, or memorial of choice.

A memorial service at Our Savior’s Lutheran Church will be held at a later date with details forthcoming.