Remembering a fallen officer from another pandemic 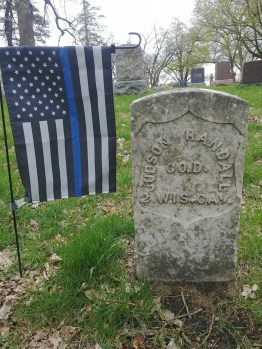 On Nov. 4, 1899, 51-year-old Albert Lea Special Policeman Judson Randall was assaulted while executing a court order commanding officers to move a smallpox patient to a quarantine hospital. Randall died from his injuries two days later on Nov. 6, 1899. His death was not acknowledged as a line of duty death until this year. - Photo courtesy Jason Taylor 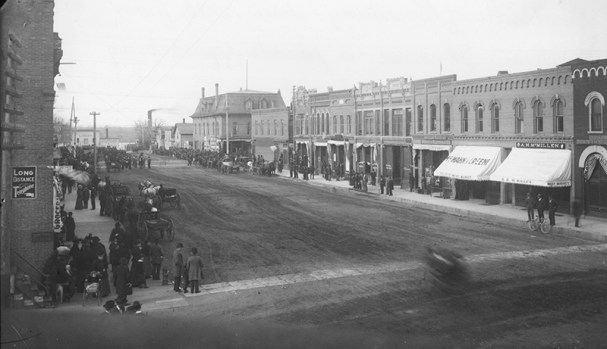 The east side of the 100 block of South Broadway Avenue is pictured as a parade approaches from the north in 1898. - Photo courtesy Freeborn County Historical Museum 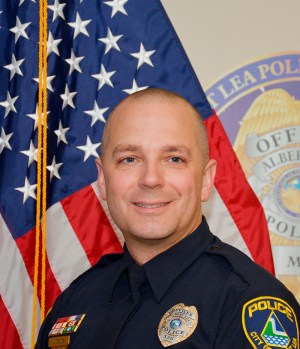 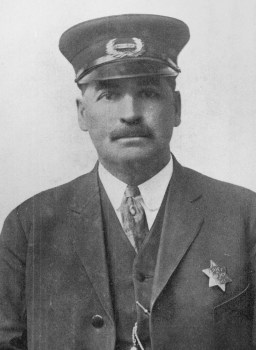 JJ Sullivan was the chief of police at the time of Albert Lea Special Policeman Judson Randall's death, and accompanied him to the Wing residence. He was a witness at the coroner's inquest of Randall's death. - Photo courtesy Freeborn County Historical Museum 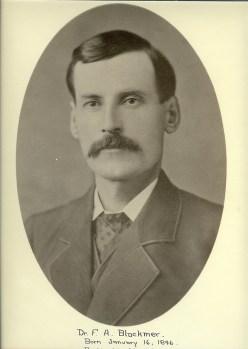 Dr. Frank A. Blackmer treated Judson Randall and was a witness at the inquest into his death. - Photo courtesy Freeborn County Historical Museum 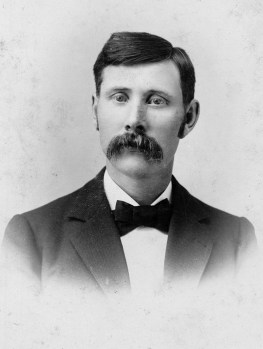 BH Knatvold, a furniture store owner and undertaker at the time of Randall's death, was a witness at the coroner's inquest. - Photo courtesy Freeborn County Historical Museum 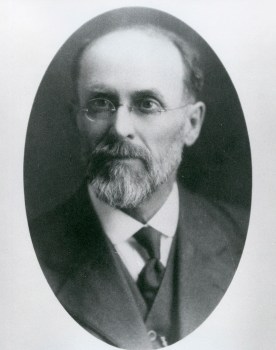 Dr. John P. Von Berg was a witness at the coroner's inquest into Judson Randall's death. He practiced in Albert Lea from 1889 to 1929. - Photo courtesy Freeborn County Historical Museum 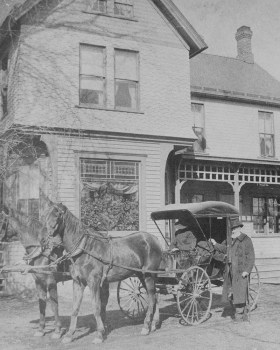 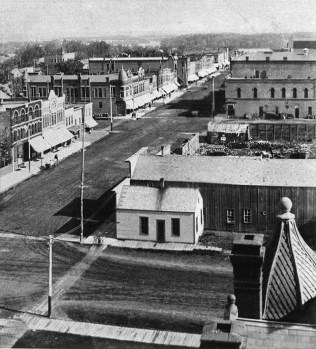 It took over 120 years and a fellow officer on the case for an Albert Lea special policeman’s death to be recognized as a line of duty death.

On Nov. 4, 1899, Dr. LJ Thomas of the local board of health was informed by Albert Lea Special Policeman Louis Torgerson that Fred Wing had contracted smallpox and was still living in the home of his father, Charles Wing, according to a Nov. 10, 1899, Freeborn County Times article. Thomas went to the Wing home on South Newton in Albert Lea to investigate, where Charles Wing confirmed that his son had smallpox.

“Thomas asked Mr. Wing why he had not informed the proper authorities of the fact instead of waiting and exposing the neighborhood, and Mr. Wing replied that he didn’t know as it was anyone’s business,” the Times article stated.

Thomas reportedly did not argue, but suggested having Fred Wing removed from the home and taken to the hospital so the home could be disinfected, especially since Charles Wing operated a weaving plant at the time and lived near a school. Charles Wing said he would not allow his son to be removed from his home. Thomas was able to place a quarantine sign on the home before going back downtown to speak with the chairman of the board of health.

It was decided that the only safe way to proceed was to remove Fred Wing from the home and to “the pest house” and to thoroughly fumigate the home, the Times article stated. Thomas consulted the city attorney, ultimately receiving a writ or court order from Justice Stacy authorizing officers to remove Fred Wing from the home. The court order was given to Albert Lea Special Policeman Judson Randall.

Thomas then reportedly returned to the Wing home to try to compromise with the family with other arrangements, such as the family moving into one room of the home so the rest of the property could be fumigated.

“Mr. Wing would not listen to any such arrangement, and said that if Fred was taken from the house it would be over his dead body,” the Times article stated.

Randall drove to the home of Albert Lea Police Chief JJ Sullivan and asked him to accompany him to the Wing home to remove Fred Wing, as he thought Sullivan’s presence might make everything go more smoothly, according to the Times article. When Sullivan and Randall arrived at the Wing home, Thomas and Torgerson were already there. Sullivan read the court order to Charles Wing, to which he replied his son was not in stable enough condition to be moved. Sullivan and Randall then left and brought Dr. Frank Blackmer back with them to examine Fred Wing, after which Blackmer said there was no danger in moving him.

In the meantime, Charles Wing had “fastened” his door to keep the officers out of his home. Sullivan asked to be admitted into the house, “but was informed he would come in at his own peril,” the Times article stated. Sullivan then cut the screen door and went in, instructing Randall and Torgerson to go and get Fred Wing. Randall was met by Charles Wing’s wife, referred to only as “Mrs. Wing” in the Times article. Mrs. Wing was armed with a broom handle and “flourished it over” Randall’s head. She was pushed aside and the handle was reportedly taken from her.

The three officers and the Wing parents were then in the kitchen of the home, with Mrs. Wing attempting to block the stairs leading up to her son’s room. As Sullivan pushed her aside, Charles Wing reportedly picked up a flatiron and was attempting to throw it at Sullivan before Torgerson stopped him and took the iron away from him.

As Sullivan then attempted to open the door to Fred Wing’s room, Randall was trying to keep Mrs. Wing away from the door. Charles Wing then seized the broomstick and a stove lifter in his right hand and struck Randall over the head, hitting him across the side of his right temple. Charles Wing reportedly hit Randall with such force that the broom handle broke into three different pieces.

“Mr. Randall’s cap was knocked off, and stooping to pick it up, he cried: ‘Sullivan, that old sun-of-a-gun hit me an awful blow,’” according to the Times article.

Randall was taken to Blackmer’s office by Thomas, where an examination revealed a gash of several inches on the side of his head that required three stitches. Randall reportedly complained that his head hurt “considerably,” but his wound was not considered serious at the time.

Randall’s symptoms weren’t considered serious until the next morning, when his family could not wake him. His wife, Nancy (Wiggins) Randall, became worried and informed Thomas of the situation. Blackmer was summoned, and Randall was found to be in “an unconscious condition.” Drs. AC Wedge, John Von Berg, Todd and Stevenson were called at various times throughout the day. After Randall’s condition started to fail rapidly, the doctors decided the only hope was an operation to remove a clot from the brain. Randall’s family objected, as they reportedly still thought there was hope, but by that evening Randall was too weak to withstand an operation.

Randall died the next day, Nov. 6, 1899, two days after the altercation at the Wing home.

An autopsy was performed by Wedge, Todd, Von Berg, Stevenson and Blackmer, and the doctors testified at the coroner’s inquest that the autopsy discovered Randall’s death had been caused by the pressure of a blood clot on the brain. A clot four to five inches long and three inches wide was found just below Randall’s wound, and above his right ear a piece of his skull had broken entirely loose. That piece of skull was held somewhat in place by tissue, but radiating from that piece were three fractures in the skull. On the opposite side of Randall’s head was a smaller blood clot, which the physicians could not explain. They ultimately ruled that an operation would have removed the clot from Randall’s brain, and there would have been a chance to save his life.

Soon after the coroner’s inquest into Randall’s death, Fred Wing was “removed to the pest house at his own request.” Charles Wing was placed under arrest the day after the altercation and charged with assault with intent to kill. After Randall’s death, the charge was changed to murder in the first degree. He was later acquitted after a five-day trial with crowds that “thronged the courtroom,” according to the Times, as a jury found him not guilty after Judge Kinsley declared the order sending the policemen into the Wing home was not valid. Charles Wing and his wife would later relocate to Texas.

In his death, Randall left behind his wife, who hailed from Glenville originally, and a daughter, referred to in the Times article as Mrs. Ed Thomas. Randall was “an experienced wheat buyer,” and reportedly put those talents to use for S. Messinger of Glenville and CM Wilkinson of Albert Lea, and was an active member of Robson Post GAR. Originally from Nova Scotia, Randall moved to the United States in 1855 with his parents, settling in Madison, Wisconsin. He served as the youngest soldier in Company D, 2nd Wisconsin Cavalry during the Civil War. He moved to Freeborn County in 1870, and with the exception of one year spent in Washington, resided there until his death.

That seemed to be where Randall’s story ended, until Albert Lea Police Officer Jason Taylor stumbled upon it last November.

Taylor said he has been interested in local history for quite a while, and enjoys going through old newspaper articles from the area. He has worked in Albert Lea for about 20 years, and last November was the first he had ever heard of Randall.

“Sadly, it seems like he was forgotten,” Taylor said.

The term “special policeman” used in Randall’s title likely means he was some kind of on-call officer and not full-time, according to what Taylor has read in other city ordinances from the late 1800s and early 1900s. Taylor said he has not tracked down specific Albert Lea ordinances from that time period yet, but he has found records of other intermittent instances where Randall was employed as a special policeman for the city.

Upon finding out about Randall — who Taylor said is the only line of duty death in the history of the Albert Lea Police Department — Taylor decided to do what he could to track down more information about him in the hopes of having him designated as an officer who died in the line of duty. With the help of Linda Evenson from the Freeborn County Historical Museum, who Taylor said he hired to help with additional research, Taylor was able to collect more information. While disclosing that he is the president of the museum’s board of directors, Taylor said Evenson was extremely helpful and that the museum played a major role in helping to get Randall recognized.

The added documentation got Randall added to the Officer Down Memorial Page, which can be found at www.odmp.org.

Even more research — such as Randall’s work history with the Albert Lea Police Department, family documentation and other supplemental documents — got Randall recognized by the Minnesota Law Enforcement Memorial Association in honor of Peace Officers Memorial Day this year. Taylor’s work to get Randall recognized by LEMA led to the Albert Lea Police Department awarding him the Commendation Medal in mid-May for his efforts.

Taylor’s next goal is to have Randall added to the National Law Enforcement Officers Memorial, but he said that will likely be more of a challenge. More documentation will be needed — such as Randall’s specific powers to arrest — and especially since a photograph of Randall has yet to be found and so much time has passed, that process will likely take longer.

While Taylor discovered Randall’s story before the COVID-19 pandemic hit, he said he has since seen the parallels — officers of the law working at a time when an unknown disease can cause fear for many. It just adds to his resolve to find recognition for Randall.

“To me, it was very important that he be recognized and remembered,” Taylor said. “He’s a guy who gave his life in service to this city.”