Funeral services for Theodore “Ted” Sipple will be held at 11:00 AM on Monday, June 15, 2020 at St. Theodore Catholic Church, Albert Lea, with Father Kurt Farrell officiating. Visitation will take place one hour prior to the service. Burial will follow at St. Theodore Cemetery. If you plan on attending, please follow social distancing policies, and masks are strongly encouraged. 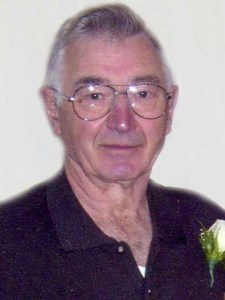 Theodore Lewis Sipple was born on October 6, 1930 in Freeborn County, MN to Lewis and Elizabeth (Kalis) Sipple. Ted would continue to live on the family farm his entire life, where many generations of family lived before him. He grew up in the area, graduating from Albert Lea High School with the class of 1949. On November 28, 1953 he was united in marriage to the love of his life, Nellie (Walters). To this union, four children were born: Charlie, Diane, Beverly, and Alan.

Ted farmed and worked for Wilsons and later Farmstead, retiring after over 39 years. He was a member of St. Theodore Catholic Church and was deeply rooted in his faith. Ted was a very talented woodworker – he could make anything out of wood! From crosses he gave to everyone, to most recently, a cradle for his first great-great-grandchild. Ted also enjoyed yardwork, and gardening, but would always find his way back to the workshop! He was a loving and caring dad, grandpa, and great grandpa.

He is preceded in death by his wife, Nellie; both parents, Lewis and Elizabeth; and siblings, Clara (Martin) Whelan, Ethel (Robert) Whelan, and Joseph (Erlis) Sipple.

Ted will be missed by all, but we can find comfort that he is finally reunited with his life partner and soulmate, Nellie.